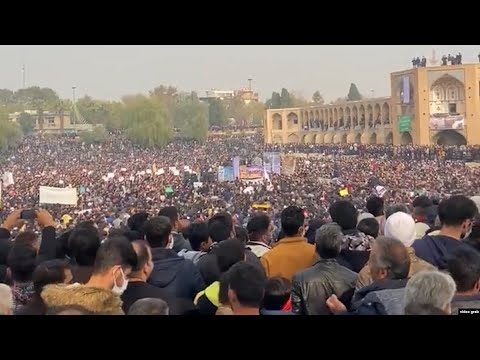 Ann Arbor (Informed Comment) – On Friday, Kayhan London reports that thousands of farmers and other activists gathered in the dry riverbed of the historic Zayandeh Rud river at the major west-central city of Isfahan to protest the lack of water in the province. The crowd alleged that the Iranian administration of President Ibrahim Raisi is diverting water to the southern Yazd province.

Even the semi-official press in Iran described the protests, saying that demonstrators carried placards asking, “Where is my Zayandeh Rud?”

The protests broke out on November 9, and have gone from strength to strength. Isfahan is a city of 2 million, and so is about as populous as Houston. The protesters, however, came from the provinces and were predominantly farmers.

Iran typically represses protests brutally, but high government officials such as First Vice President Mohammad Mokhber have admitted that the government needs to take action for the farmers. President Raisi himself met with provincial governors last week and pledged movement on the water issue.

Other Iranian observers are aware that man-made global heating is significantly responsible for the drying up of the river since the year 2000. In the far northwest of the country, Lake Urmia has shrunk by 50%, from 2000 sq. mi. to less than a thousand, and scientists estimate that at least a third of the shrinkage was caused by the climate emergency.

Scientists project that precipitation in Iran will fall by 35% over the next few decades and the average temperature will increase by a startling 4.68° F. (2.6 °C.) A nearly 5 degrees increase may not sound like much, but it is a rise in the average surface temperature, which includes Iran’s chilly mountains, so in low-lying town near the waters of the Gulf, the increase could be substantially greater. In fact, some of those towns may become uninhabitable in this century because the temperatures will hit 150° F. in the summer, which humans cannot survive.

Ironically, Iran is a major oil state, and its most prominent product emits, are responsible when burned, for 14% of CO2 emissions annually. Iran is the most carbon-polluting country in the Middle East and the seventh largest in the world.

“In combination with management related issues, Iran has been confronted with many disasters from shrinking a significant number of lakes and river, to land subsidence, floods, and droughts. Lake Urmia – the largest lake in the Middle East and one of the world’s largest hypersaline lakes – has significantly shrunk and given the status quo, it may completely dry up in 6–9 years16. Hamun lake in the east of Iran, Parishan and Shadegan lakes in the south and Zayandeh-Rud river in the center of Iran, are also at risk of disappearing due to mismanagement and climate change.”

I visited the Allahverdi Khan or 33 Arches bridge at Isfahan in the summer of 1976, and it was then a place that people gathered. Isfahani poets celebrated their river. I never imagined that this major artery would just dry up and blow away.

Water protests had also broken out last July in the southern Khuzestan Province.

Iran, as an arid country facing significant global heating, is likely to see more such protests as time goes on, and if they grow big enough they could shake the stability of the government.