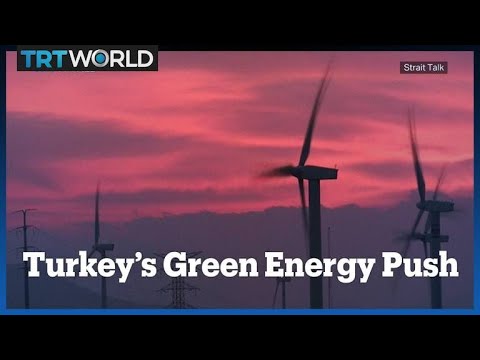 Ann Arbor (Informed Comment) – The Daily Sabah reports that on Sunday November 28, Turkey got 22.6% of its electricity from wind power, a first in the country’s history. Turkey has an installed capacity of 10.5 gigawatts of wind.

Of course, this result is a little bit of a fluke, and just requires heavy winds and low demand (Turks take Saturday and Sunday as their weekend). Ordinarily, a third of the country’s electricity generation is hydroelectric, and 13.8 percent is from coal. In 2020 the over-all contribution of wind to electricity production was only about 10 percent. But Turkey keeps putting in more wind turbines, and has plans for another 10 gigawatts of wind and 10 of solar. Turkey invested $1 billion in new wind turbines in 2020, The Daily Sabah says, putting it in the top 5 European countries for such investments.

Turkey is a country of 84 million, about as populous as Germany, and is in the G-20, the top 20 economies in the world. It is, however, largely a service economy, with services accounting for 50 percent of gross domestic product, industry for 18 percent, and agriculture for 15 percent. Turkey’s industry has grown by leaps and bounds in the past 30 years, and the GDP increased 80% just in this century. Turkey is in NATO and is a U.S. ally, though relations have been frayed in recent years because Washington was disappointed that Ankara wouldn’t step up and fight ISIL, and Turkey was disappointed that the US allied with Kurdish leftist forces in Syria (branded “terrorists” by Turkey) to defeat ISIL. Turkey is both in Europe and in Asia Minor and is often seen as a bridge between Europe and Asian powers. The country is almost entirely Muslim, mostly Sunni, though about 20 percent are Alevi folk Shiites.

The International Energy Agency says that Turkey has tripled its renewables in the past decade. By 2019, 44 percent of Turkey’s electricity was generated by renewables, including hydro. The agency believes Turkey can do substantially better than 10 new gigawatts each of solar and wind in the coming years if the government tries.

Turkey’s parliament finally ratified the Paris Climate Accords this year before the COP26 conference. In that regard, President Tayyip Erdogan recently pledged that his country will be carbon neutral by 2053. Some Turkish observers viewed these steps cynically, pointing out that the industrialized world is offering climate aid to developing countries that make strides toward carbon reduction and that Erdogan likely just wants in on that revenue stream..

Unfortunately, Turkey has an “all of the above” energy policy and is investing in the expansion of local lignite coal, for jobs and energy independence, and the expansion of natural gas, including drilling a newly found field in the Black Sea,, and raising tensions by prospecting for more gas off Cyprus in the Mediterranean.. Turkish scientists do not believe that Turkey can meet its climate goals by 2053 unless it halts all coal burning by 2030. Turkey’s economic nationalism, in which it strives for less dependence on Russia, Iran and Iraq for its energy needs, impels this interest in exploiting local coal and natural gas.

Turkey emits about half a billion tons of carbon dioxide annually, and the electricity sector produces about 70 percent of it. Coal is the most carbon intensive fossil fuel.

So it is great news that Turkey has put in 10 gigs of wind and plans to double that, but unless it stops investing so heavily in coal and gas there is no way for it to get to a zero carbon grid by 2053.