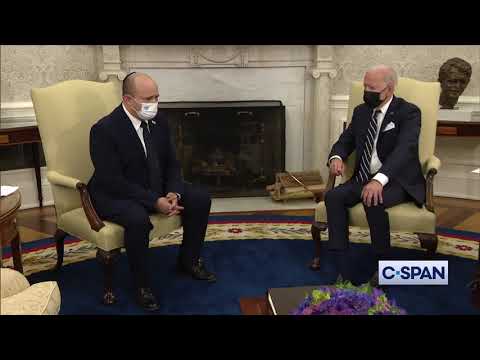 ( Middle East Monitor ) – Any hopes that the removal of Benjamin Netanyahu from power would bring us closer to a revitalised peace process or less oppression of the Palestinian people have been dashed.

The new Israeli Prime Minister, Naftali Bennett, has been unequivocal in his rejection of attempts to draw him and the Palestinians closer together. He recently issued three nos. No to restarting peace talks, no to meeting Palestinian President Mahmoud Abbas and no to a Palestinian state. He recently went further stating that “a Palestinian state would be a terror state”. In this his racism comes to the fore because he suggests that no Palestinian entity can be anything but a terror entity.

Bennett forgets that to Palestinians under occupation, Israel is the epitome of terror. Ask Palestinians whose homes have been demolished, whose olive harvest has been destroyed or trees cut. Ask Palestinian children snatched from their parents in the middle of the night. Ask the people of Gaza under a 15-year-old siege and who lost loved ones under Israeli bombardment. Visit the site of UN OCHA and read their weekly reports and you will quickly realise, if you aren’t already aware, the terror the Palestinians face.

Those who thought that the exit of the anti-Palestinian Trump Administration and the arrival of Barack Obama’s Vice President into the White House would herald a new dawn that would reverse all of Trump’s immoral and illegal acts were predictably disappointed.

While US Secretary of State Antony Blinken in conversation with Israeli Foreign Minister Gabi Ashkenazi “emphasized the administration’s belief that Israelis and Palestinians should enjoy equal measures of freedom, security, prosperity and democracy,” he has seen little progress from the Israeli side. His view on settlement activity only went as far as his call that Israel “should refrain from unilateral steps that exacerbate tensions and that undercut efforts to advance a negotiated two-state solution.” Yes, this is a better position than former Secretary of State Mike Pompeo’s decision to say that the settlements were not ‘pre se illegal’.

The Americans did make some moves back from Trump’s most damaging policies on UNRWA by restoring some funding. Blinken has also talked about reopening the Palestinian Mission in America and the US Consulate in East Jerusalem, which acts as the de facto embassy to the Palestinians. Trump, not only recognised Jerusalem as Israel’s capital and moved the US Embassy from Tel Aviv to Jerusalem, he closed the East Jerusalem Consulate, partly under pressure from his Ambassador to Israel David Freidman.

The Palestinian Mission in Washington remains closed. However, it is the East Jerusalem Consulate that has become a battle of wills between the American president and the Israeli prime minster.

Bennett announced that he will not allow the Consulate to reopen as “There is no place for an American consulate that serves the Palestinians in Jerusalem.” He further stated that “Jerusalem is the capital of the State of Israel only.” He said this at a press conference, alongside Alternate Prime Minister Yair Lapid and Finance Minister Avigdor Lieberman.

Lapid went further in what is an additional challenge not only to Biden. Lapid said: “If the Americans want to open a consulate in Ramallah, we have no problem with that…. Sovereignty in Jerusalem belongs to one country alone, the State of Israel.”

Many of the international missions to the Palestinians are in Sheikh Jarrah, the site of the battle between 28 Palestinian families and a US based settler organisation who is after their land. It falsely claims ownership of the land, and an Israeli court which has no jurisdiction in occupied East Jerusalem is engaged in a facilitation of ethnic cleansing as it is looking for ways to take the heat out of the threats of evictions now and postpone them to a later date.

What will Biden do now about reopening the consulate? Will he insist on the reopening or will he let the current situation continue? There is no doubt that the Israelis will double down on the position they announced. They will not want to give back anything Trump gave them. It should be remembered that Trump also recognised that the illegally occupied Syrian Golan Heights are part of Israel. Biden has not reversed that recognition to date.

What the recent Israeli decision has raised is not only that the US Consulate would not reopen in Jerusalem but the message to other states with Missions in East Jerusalem might be that there will come a time when they too will have to be moved to the West Bank. Israel always does what might be thought of as an irrational. However, it is a colonising state and the appetite of the coloniser to grab more land is endless. It will continue to ethnically cleanse Jerusalem to turn it in to a Jewish city, while making the political moves to deepen Israel’s ‘sovereignty’. Having Palestinians and diplomatic missions in East Jerusalem go against its expansionist greed.

Israel enjoys complete impunity and unwavering support from the so-called international community to do what it likes. Trump’s Administration ensured that. Take its decision to label six Palestinian human rights organisations terrorist organisations despite there being no credible evidence to support this absurd claim, and the shy response of much of the international community.

For once perhaps, I am backing President Biden. I hope he will win the battle of wills to reopen the US Consulate, but I also hope the other states with consulates in East Jerusalem will stand strong if the pressure to move to the West Bank comes. Jerusalem is not only the missions’ home but home to hundreds of thousands of Palestinians who want to stay and not move to the West Bank or anywhere else. It is their city and Palestine’s capital.

Professor Kamel Hawwash is a British Palestinian engineering academic based at the University of Birmingham. He is a commentator on Middle East affairs, Chair of the Palestine Solidarity Campaign (PSC), and a founding member of the British Palestinian Policy Council (BPPC). He writes here in a personal capacity.