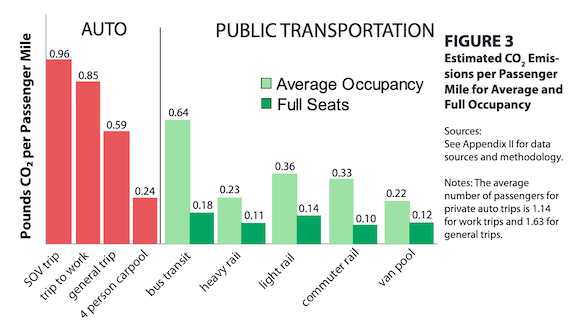 Ann Arbor (Informed Comment) – The Bipartisan Infrastructure Investment and Jobs Act that was passed by the Senate some time ago and then passed by the House of Representatives on the evening of Friday, November 6, has some great news in it for greening the economy. It is admittedly a mixed bag, but let’s consider some of the very substantial goodies for us Greens.

One reason for doing so is that optimism is our friend when it comes to climate. Every pound of carbon dioxide not emitted is a fraction of global heating or climate destabilization that doesn’t happen. Some of the anti-carbon language in this act is unprecedented in federal legislation. Let us celebrate this.

Transportation is responsible for 30% of US carbon dioxide emissions, the largest single source.

The vast expansion of rails is intrinsically good for the environment, since on full train compartment the carbon emissions per passenger are 1/10 that of a single-occupancy passenger automobile. And, who knows, maybe Secretary of Transportation Pete Buttigieg will manage to get some new electric rail transportation (some of AMTRAK is already electric). That would be really low carbon, and all the more so as renewables grow as proportion of electricity generation.

There is $7.5 billion in the act for electric charging stations and that is only the beginning of the good news. Watch Secretary Buttigieg’s remarks in the video at the end for more about what this means.

One barrier to widespread public adoption of electric cars has been range anxiety, since even the new generation of improved EVs typically gets 200 to 300 miles on a charge and it takes some time to recharge. Most trips in a passenger car are five miles or less, so it is rare that you’d run out of juice in daily life, but apparently people want their car to take them 600 miles for that once a year vacation. Uh, you could just rent a car to go on vacation with and save yourself loads of money from not paying for gasoline through the rest of the year. But there you have it, people have a hang-up. So if we put in lots of fast charging stations, maybe they’ll finally pop for an EV (and they are coming down rapidly in price). Voila:

So it is a bummer that the senators who crafted the bill sneaked in “natural gas vehicles,” but I very much doubt there will be many of those as time goes on. The future is electric. Hertz just put in an order for 100,000 Teslas, which shows you which way the smart money is headed on this issue. And someone sneaked in a provision that the secretary of transportation must conduct:

I don’t know if the natural gas people realize it, but if the assessment of estimated emissions is a consideration, then the electric vehicles win all the marbles.

So in practical terms, most of the money for fueling infrastructure is going to electric charge stations, especially under Buttigieg for the next 3 years.

That is great news.

One problem that has bedeviled putting up electric charging stations has been that there is a tangle of local regulations about electric installations, many of them viewing charging stations as the prerogative of utilities. Hence, a lot of gasoline stations can’t offer electric charging. The IIJA provides funds for non-proprietary charging stations — that is, they have to charge all electric vehicles, or EVs, not just one model. Further, there has to be a way of paying to fill’er up that is available to all members of the public. Finally, “Notwithstanding any other provision of law, a project to install electric vehicle charging infrastructure using funds provided under this title shall be treated as if the project is located on a Federal-aid highway.”

Bingo! That patchwork of local and state laws interfering with businesses offering electric charging has just had a buzz saw put through it. The federally paid-for charging stations are authorized by the federal government.

There are provisions for electric bicycles.

Then, the Secretary of Transportation can authorize “the construction of a bus rapid transit corridor or dedicated bus lanes,” along with depots and other infrastructure that will expand public transportation.

The Department of Transportation explains that when a single individual drives a gasoline passenger car on a typical trip, the car dirties up the atmosphere with about one pound of carbon dioxide per person. If a gasoline bus is full of passengers, it sends only .18 pounds worth of heat-trapping CO2 into the atmosphere per person. Of course, most buses aren’t full, but even at 1/4 full the per person emissions come down by a third. More buses, which are in the IIJA, translate into less CO2 emissions per person.

Another problem with charging has been that what charging possibilities there are tend not to be very accessible to people who live in apartments, in low-income areas, or in rural areas. Ahem:

There is a whole section instructing the secretary of transportation to reduce carbon dioxide emissions in US transportation. There is even attention to getting truck drivers to stop idling their vehicles while waiting for pickups. Idling vehicles are very carbon intensive. Also, traffic jams are carbon intensive. The act looks to the electrification of truck stops, and to monitoring traffic to reduce carbon dioxide emissions.

‘(b) ESTABLISHMENT.—The Secretary shall establish a carbon reduction program to reduce transportation emissions. ‘‘(c) ELIGIBLE PROJECTS.— ‘‘(1) IN GENERAL.—Subject to paragraph (2), funds apportioned to a State under section 104(b)(7) may be obligated for projects to support the reduction of transportation emissions,including— ‘‘(A) a project described in section 149(b)(4) to establish or operate a traffic monitoring, management, and control facility or program, including advanced truck stop electrification systems;

In many urban environments, it makes more sense to walk or bike than to drive some places, but there aren’t any bike lanes or sufficient sidewalks for walking. These problems can now be fixed by towns and cities with federal help:

‘‘(B) a public transportation project that is eligible for assistance under section 142; ‘‘(C) a project described in section 101(a)(29) (as in effect on the day before the date of enactment of the FAST
Act (Public Law 114–94; 129 Stat. 1312)), including the construction, planning, and design of on-road and off-road trail facilities for pedestrians, bicyclists, and other non-motorized forms of transportation; ‘‘

Rejiggering traffic lights and better civil engineering of traffic would also help. And we need to encourage people to avoid traffic jams and to ride-share to work:

(D) a project described in section 503(c)(4)(E) for advanced transportation and congestion management tech-
nologies; ‘‘(E) a project for the deployment of infrastructure- based intelligent transportation systems capital improvements and the installation of vehicle-to-infrastructure communications equipment, including retrofitting dedicated short-range communications (DSRC) technology deployed as part of an existing pilot program to cellular vehicle-to-everything (C–V2X) technology; ‘‘(F) a project to replace street lighting and traffic control devices with energy-efficient alternatives; ‘‘

(G) the development of a carbon reduction strategy in accordance with subsection (d); ‘‘(H) a project or strategy that is designed to support congestion pricing, shifting transportation demand to nonpeak hours or other transportation modes, increasing H. R. 3684—128 vehicle occupancy rates, or otherwise reducing demand for roads, including electronic toll collection, and travel demand management strategies and programs;

The act supports “(I) efforts to reduce the environmental and community impacts of freight movement” and “(ii) the purchase or lease of zero-emission construction equipment and vehicles, including the acquisition, construction, or leasing of required supporting facilities;”

So a lot of people are going to get Chevy Bolts, Teslas, and other EVs to drive at work. There is language about a “diesel retrofit” of vehicles, but again, I just don’t think a lot of that is going to be happening.

Another thing that will be supported is any “project that reduces transportation emissions at port facilities, including through the advancement of port electrification.”

States applying for these funds have to present firm plans for carbon reduction, and there is a two-year review.

This is the first legislation I’m aware of where the federal government is only giving out money to states for projects if they can be shown to reduce carbon dioxide (hence my conviction that there won’t be much diesel retrofitting going on).

There is also money for transportation “resilience,” which is implicitly a mandate to states to start preparing for the worst impacts of the climate emergency on transportation, and attempt to mitigate them.

So I know this column has been really wonky, but my point is that the IIJA has some very positive implications for climate action. It will depend in part on how it is interpreted and implemented, but on the whole I think the tendency will be toward electrification of transportation and steps in the meantime to reduce emissions from gasoline vehicles by reducing traffic congestion, encouraging public transport, and cutting down on congestion and idling.