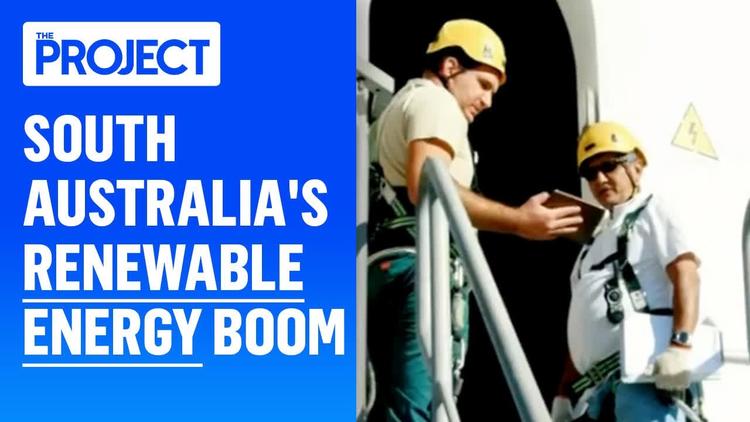 Ann Arbor (Informed Comment) – Giles Parkinson at Renew Economy reports that for several hours on Sunday, November 21, the huge state of South Australia (which is has an area bigger than Texas) generated more electricity than it needed, mostly from rooftop solar. This is the first time we’ve seen a gigawatt-scale grid go upside down from rooftop solar that way.

“South Australia on Sunday became the first gigawatt scale grid in the world to reach zero operational demand when the combined output of rooftop solar and other small non-scheduled generators exceeded all the local customer load requirements.”

Rooftop solar alone generated 95.6% of the demand for a few hours, with the rest made up by some small solar farms and perhaps a bit of biomass. Electricity generated by wind farms and other sources was sent over to Victoria.

The Project: South Australia Are World Leaders In Renewable Energy | The Project

Over all, wind and solar accounted for 62% of South Australia’s electricity production this past year, and the state has set a goal of making it 100% by 2030, a goal it is likely to meet early. By 2050 the state intends to get 500% of its electricity from wind and solar and to export everything above 100% to the rest of Australia or abroad via green hydrogen.

Sunday was the first time that primarily rooftop solar generation pushed the grid into negative territory, and it is the first time that has happened in any large industrial grid. 300,000 homes and businesses have solar panels on their roofs in South Australia, which means that over a third of SA’s homes have solar panels. The state’s population is 1.76 million million, much of which lives in the coastal city of Adelaide. It is similar in population to Idaho or West Virginia.

This October, solar plus wind generated 72% of South Australia’s electricity demand, more than the annual average. It is spring and sunny in Australia, and the weather is mild, so power demand is lower than usual. Plus, Australians are putting up solar panels on their roofs en masse. With subsidies, rooftop solar provides electricity at about 3.6 cents US a kilowatt hour. Coal is typically figured at 5 cents a kilowatt hour (not counting its cost in pollution nd global heating), and natural gas is expensive in Australia, so solar is the cheapest electricity in that market.

It is notable that US states such as Georgia, Alabama and Arizona have similar solar potential to South Australia’s, but that the way in which the Republican Party leadership is entwined with Big Carbon has discouraged American states from doing what South Australia is doing.

Because wind does not blow all the time and the sun does not shine at night, some observers had voiced concerns about the stability of an electric grid dominated by renewables. There was a blackout caused by a glitch with wind turbines, but that has been fixed. Now, South Australia’s grid is, however, stable. Connecting to the Victoria grid and installation of a huge 100-megawatt Tesla battery have helped with stability. Renewable electricity is inexpensive, at 4.5 Australian cents a kilowatt hour (about 3.3 US cents/ KWh).

South Australia expects to become a major exporter of rooftop solar-generated electricity to the rest of the country, and expects that rooftop solar alone can consistently generate half of all the state’s electricity needs within ten years.

Australia more generally is dominated by coal plants and the country is a big exporter of coal, giving Australians one of the world’s biggest carbon footprints per capita. South Austrialia’s energy transition is therefore all the more remarkable. And, it is driven by a Liberal [i.e. conservative] government, whereas the national Liberal Party is more wedded to coal than US Sen. Joe Manchin.

I noted elsewhere that “Adelaide was originally populated by the aboriginal Kaurna people, who called it Tarndanyangga. It is now about as populous as San Diego. It was settled by free British immigrants, unlike the rest of Australia, which was a penal colony. In the nineteenth century, “Afghans” were brought in as camel drivers. It has the oldest continuously functioning mosque in Australia, constructed in 1889, and the state is known for its dedication to religious freedom.” 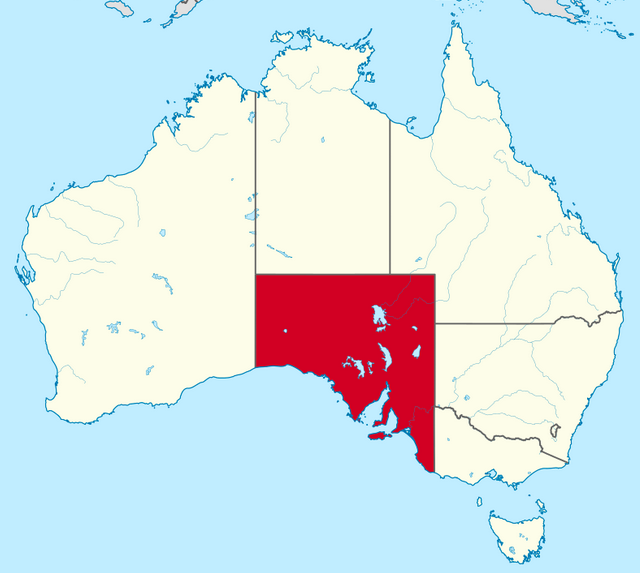 “South Australia. By TUBS – Own work This W3C-unspecified vector image was created with Adobe Illustrator. This file was uploaded with Commonist. This vector image includes elements that have been taken or adapted from this file: Australia location map.svg (by NordNordWest)., CC BY-SA 3.0, https://commons.wikimedia.org/w/index.php?curid=16876418.