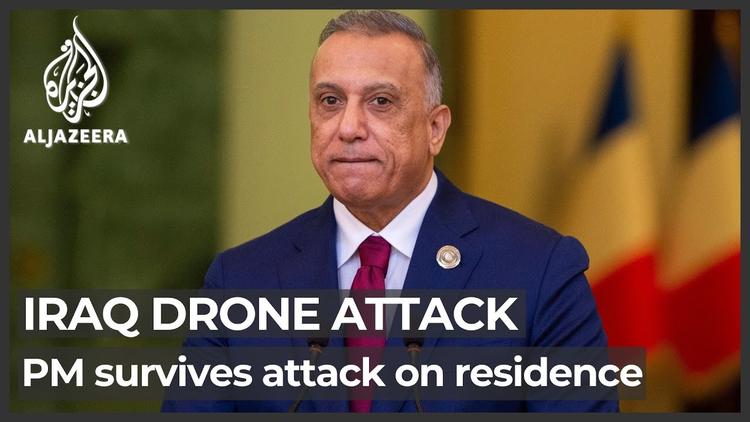 Ann Arbor (Informed Comment) – Al-Jazeera reports that Iraqi authorities on Sunday announced that Iraqi caretaker Prime Minister Mustafa al-Kadhimi escaped being assassinated by three drones loaded with explosives that targeted his residence in the Green Zone in the center of Baghdad around dawn. No group claimed responsibility for the attack, which damaged the prime minister’s mansion.

Sources told Al Jazeera that al-Kashimi was in the PM’s residence when the drones hit it, and that the building suffered substantial damage. The Iraqi military spokesman, Gen Yahya Rasul, said that al-Kadhimi was unharmed. An Interior Ministry spokesman said that five drones were fired and that two had been shot down before they could hit the house.

Reuters is reporting that 6 of the prime minister’s personal bodyguards were wounded. Diplomats in the Green Zone said that they heard the blasts and the sound of machine gun fire.

Al-Kadhimi came on television and made a brief statement that he and the people he works with are good health and denounced the attack as “cowardly.” He said that drones cannot build the Iraqi nation or its future.

The October 10 parliamentary elections brought new forces to the fore, who are trying to form a government, and it is not clear that al-Kadhimi would be selected by the victorious coalition as prime minister again. He remains caretaker prime minister until a new government is formed, a process that can sometimes take several months.

Both the US and Iran leapt to condemn the attack. The head of the Iranian national security council, Ali Shamkhani, called it “terrorism” and “a new round of strife that foreign centers of thought are behind.”

Muqtada al-Sadr, leader of the political bloc that won the most seats in parliament in the recent elections, said in a statement shared on social media that this was an act of terrorism that targeted the security and stability of the Iraqi people and which aimed at returning it to “a state of chaos so that the forces of anarchy can dominate it.” Al Jazeera was told that al-Sadr reached out to the prime minister to be assured of his safety.

Walid Ibrahim, the Al Jazeera bureau chief in Baghdad, said that “forces of anarchy” as typically used by al-Sadr refers to armed groups who refuse to be joined with official security forces and who style themselves “resistance brigades.”

Ammar al-Hakim, leader of the “State-Nation Forces” coalition, worried that the attack presaged graver events to come and that they endanger the achievements that have been won.

Al Jazeera said that Abu Ali al-Askari, the leader of the Brigades of the Party of God, a Shiite popular militia backed by Iran, downplayed the importance of the attack, saying in a Tweet that no one would waste drone strikes on the residence of an outgoing prime minister, and there would be easier ways to dispose of him if that were the goal.

The attack came after weeks of high tension in the country over the outcome of the October election, in which the parties linked to the Shiite Popular Mobilization Forces or militias who are close to Iran did very poorly. These parties, including Fateh, have called the election fraudulent.

On Friday, violent clashes took place between demonstrators supporting the Shiite militias, who rejected the results of the election, and Iraqi security forces, who turned back their attempt to storm the Green Zone.

Al-Zaman [The Times of Baghdad] reports that the top Iraqi judicial authorities have launched a probe into whether the drone strikes were related to Friday’s protests.

Al-Kadhimi is a former Interior Minister who worked closely with the US military to defeat the ISIL terrorist organization and who has difficult relations with the Iran-backed Shiite militias. Despite a parliamentary decree in winter, 2020, demanding that all US troops leave the country, al-Kadhimi worked this summer with the Biden administration to keep about 2,000 US troops in Iraq, though in a non-combat role, as trainers and advisers to the Iraqi military in its efforts to mop up the remnants of ISIL.

The US insistence on remaining militarily in Iraq, with al-Kadhimi’s help, in defiance of the parliamentary decree, elevated tensions between the prime minister and those Shiite nationalists who want the US gone. The US embassy in the Green Zone has also taken mortar fire on numerous occasions.

Parliament demanded that the US get out after Trump used a missile strike to assassinate Iraqi Gen. Abu Mahdi al-Muhandis, leader of the Brigades of the Party of God, and Iranian Gen. Qasem Soleimani, the head of the special operations brigades of the Iranian Revolutionary Guards Corps, on January 3, 2020.

Some Arab columnists were quick to accuse the Shiite militias of being behind the assassination attempt, and to call for their forcible dissolution.

Sky News Arabic wonders whether the drone strike was an attempt at a coup by the Popular Mobilization Forces.

There will be hopes in Saudi Arabia, Israel and the US that the Shiite militias get blamed for the attack, leading to a sharp diminution of Iranian influence in Iraq.

The Shiite militias grew up earlier but mobilized on a large scale to fight ISIL at a time when the Iraqi army had collapsed, and staged the first major battle against the formidable terrorist group at Tikrit, where there were only 4,000 Iraqi troops but thousands of PMF troops. Iran gave strategic and logistical help at the battle of Tikrit, and the US reluctantly provided air support to the Shiite militias in the end, rather than see them lose to ISIL.

The results of last month’s election suggest that the Shiite militias have plummeted in popularity. For the past two years Iraqi youth and activists have been demonstrating against the corruption of the Iraqi government and its failure to provide essential services. At some points the Shiite militias intervened against the protesters and even killed some of them, which may have contributed to the bad odor in which they are now widely held.

Muqtada al-Sadr, once a militia leader himself, has called for the PMF troops to join the regular Iraqi army.

The Shiite militias are part of a general model that Iran has used to gain influence in Arab countries. You have Hezbollah in Lebanon and Syria, and the Houthis in Yemen, as well. The militias provide security and social services, becoming a state within a state. This model, however, has generally been destabilizing for the countries where it has been deployed.