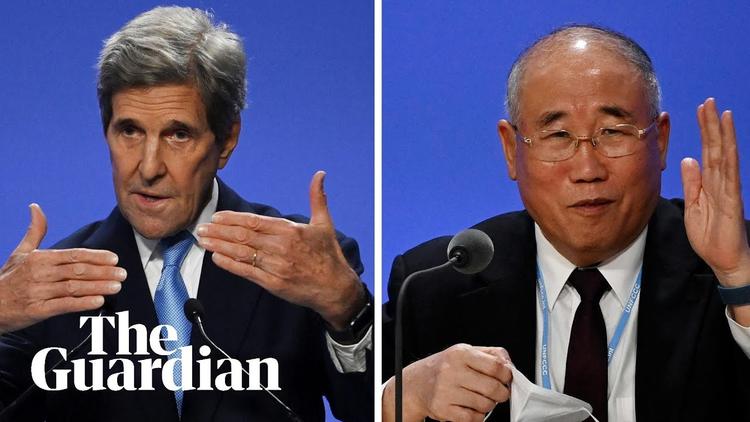 Ann Arbor (Informed Comment) – Owen Churchill at the South China Morning Post reports that the United States and China at the UN Climate Conference COP26 have agreed on a statement of principles aimed at limiting extra global heating to 2.7 degrees F. (1.5C) above the late 18th century norms before humanity began dumping billions of tons of greenhouse gases into the atmosphere by burning coal, petroleum and natural gas.

Ronald Reagan used to say that he sometimes wished for an invasion of aliens from outer space because it would unite the whole world, then deeply and dangerously divided between the US-led capitalist bloc and the Soviet Union-led Communist bloc against a common enemy. He remarked in a 1987 speech, ““Perhaps we need some outside universal threat to make us recognize this common bond. I occasionally think how quickly our differences worldwide would vanish if we were facing an alien threat from outside this world.”

Ladies and gentlemen, we have our alien space invasion. It is the climate emergency, which is preventing invading sun rays that strike the earth from radiating back out into outer space, keeping their heat here. Halting carbon dioxide emissions would allow the oceans to absorb the extra CO2 now in the atmosphere, allowing the sun rays finally to say adieu to earth.

President Biden’s climate envoy, John Kerry, said that US-China cooperation on climate was “the only way to get this job done.”

Xie Zhenhua, China’s chief climate negotiator, said that the two countries had pledged “enhanced climate action in the 2020s under the framework of the Paris agreement.”

The agreement is one of principle, and the two countries will have regular meetings to fill it out with concrete details.

Former Secretary of State Kerry has expressed concerns about China’s plans to cease growing its carbon emissions by 2030 (which means it is right now building new coal plants), saying that that target should be moved up.

On the other hand, China has reduced the percentage of its electricity that is generated from coal from 80% to 57% in the past decade and a half, with wind, water and hydro now providing 28% of China’s electricity (the US figure is only 20%). China put in 76 gigawatts of new wind capacity in 2020 alone. Total US wind power capacity is only 118 gigawatts.

The US and China have poor relations on a number of global issues and Washington has begun to see China not as just a rival but as a potential enemy. The Xi Jinping government in Beijing, in the meantime, seems at times on the verge of abandoning the long-held doctrine of harmonious development, picking fights with the Philippines and Japan over insignificant maritime real estate and throwing its weight around.

Because of the two countries’ slams at one another and their increasingly vocal rivalry on the world stage, some observers have warned of a new cold war. In my view that language makes no sense, since the Cold War between the US and the Soviet Union had a different character entirely. China, unlike the old Soviet Union, seems relatively uninterested in spreading a socialist economic model, and it has tinkered with its own to allow for a huge capitalist sector. China, unlike the Soviet Union, is not surrounding itself with Communist neighbors and is not seeking to destabilize other countries or install pro-Beijing juntas.

The US-China competition is much more like European rivalries in the eighteenth and nineteenth century, as between France and Britain or Britain and Germany, where capitalist countries competed for entry into foreign markets on the most favorable terms and for diplomatic and military spheres of influence. Despite President Xi’s sabre rattling, China isn’t at the point where it has taken over other countries (as the US did most recently in Iraq and Afghanistan).

So it is heartening that, according to Churchill quoting Xie Zhenhua (China’s climate envoy), Beijing and Washington have held some 30 meetings since President Biden came into office to develop the new initiative. Mr. Kerry is certainly correct that this “is the only way to get this job done.” And perhaps this climate cooperation could be the basis for greater cooperation and less rancor between China and the US on a range of other issues.

The Guardian: “US and China announce surprise climate agreement”