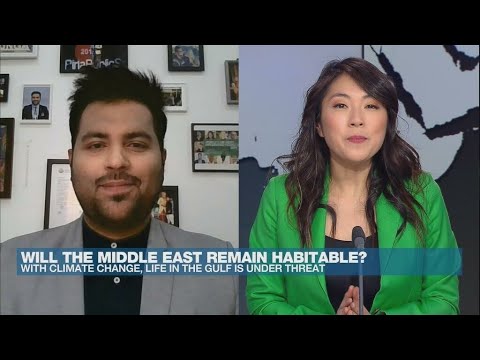 ( Middle East Monitor ) – Alarm bells are ringing at the COP26 climate summit in Glasgow over the perilous fate of the planet. The threat of a “doomsday” scenario was echoed in the speeches of world leaders taking part, warning of the “existential threat to human existence”. The message could not be clearer or starker: “We are digging our graves” if life continues as normal through our combined failure to cut dependence on fossil fuels.

To prevent the planet’s slide into oblivion, limiting global warming to 1.5 degrees Celsius over pre-industrial times is a key target, as is a pledge to reach net zero carbon emissions, the Holy Grail, as it were, for preventing ecological disaster. Depending on which climate simulation you use, our planet’s average temperature could increase by anything from 1.1 to 5.4 degrees by the end of the century.

For the Middle East North Africa (MENA) region, it could be apocalypse time if temperatures rise as predicted. The region is warming twice as fast as the rest of the world. Recent heatwaves gave us a glimpse of what we can expect, with a number of countries breaking temperature records. Kuwait, for example, recorded a temperature of 53.6 degrees Celsius in 2016. A year later Iran recorded the hottest official temperature in the region with 54 degrees. It’s thought that by the end of the century, if the more dire predictions prove true, Makkah may not be habitable, placing the Muslims’ obligatory Hajj pilgrimage at risk.

Jos Lelieveld, an expert on the climate of the Middle East and Mediterranean at the Max Planck Institute, has said that the Middle East has overtaken the European Union in greenhouse gas emissions even though it is “particularly strongly affected” by climate change. “In several cities in the Middle East, temperatures have been soaring well in excess of 50 degrees Celsius,” he explained. “If nothing changes, cities may experience temperatures of 60 degrees Celsius in the future, which will be dangerous for those who do not have access to air conditioning.”

The dire consequences of climate change in the Middle East are a major source of conflict. Although hotly debated and challenged, the connection between climate change and the Arab Spring revolutions was often cited by analysts and world leaders as a warning. Climate change is seen as a “threat multiplier” for instability in the decades ahead. Human-induced climate change, it’s believed, was a contributory factor in the Syrian civil war. Extreme drought prior to the outbreak of the conflict was apparently the reason for the large-scale migration before hostilities broke out, which in turn exacerbated the socio-economic stresses that underpinned Syria’s descent into bloodshed.

What is not contested, however, is the fact that the region is in a bind when it comes to facing what US President Joe Biden has called an “existential threat”. Meeting the 1.5 degrees target and getting to net-zero carbon emission is arguably far more complicated for the Middle East than any other region. It can only be achieved through a dramatic reduction in the global consumption of oil, a prospect that is not in the interest of countries heavily dependent on the sale of fossil fuels. Precisely how much has been estimated by the International Energy Agency (IEA).

To achieve net‐zero emissions by 2050 oil demand will have to fall from 88m barrels a day (mb/d) in 2020, to 72 mb/d in 2030 and to 24 mb/d in 2050. This sharp drop represents a fall of almost 75 per cent between 2020 and 2050, a decline sharp enough to make it counterintuitive for oil dependent countries to honour whatever climate pledges they make. Petro-states in the Gulf remain heavily reliant on oil and gas exports, accounting for more than 70 per cent of total exports. In the same heavily oil dependent countries, 70 per cent of total government revenue also comes from the sale of fossil fuels. For Saudi Arabia, the world’s largest exporter of oil, the figure is 75 per cent. Given its dependency on oil, therefore, it’s no wonder that Riyadh mocked the IEA findings as living in “La-La land“. The Gulf Kingdom has nonetheless pledged to reach net zero carbon emissions by 2060. The UAE, meanwhile, has said that it will reach this target a decade earlier.

A pledge to meet a target four decades into the future, though, counts for very little without a plan. Details about how to reach this goal still remain sketchy. Saudi Arabia, China, India, Russia and Australia are said to have issued either weak new plans or none at all to cut carbon emissions this decade.

Throwing Riyadh’s commitment into further doubt, a huge leak of documents seen by BBC News shows how the government has been lobbying along with several other countries for changes in a crucial scientific report on how to tackle climate change. The leak reveals countries pushing back on UN recommendations for action days before they will be asked at the COP26 summit to make significant commitments to slow down climate change and keep global warming to 1.5 degrees.

It’s well-known that pledges made to reach net zero emissions can be easily abused. Instead of governments or companies fulfilling their promises to stop emitting carbon dioxide altogether, they often say that they will reduce fossil fuel emissions from their own factories, homes and cars as much as they can, and then offset whatever they can’t get rid of by, for example, planting trees or using technology to pull carbon out of the air. It’s a technique that is said to be highly dubious but nevertheless used widely by oil hungry economies when making forecasts.

Commenting on the bind which petro-states find themselves in, Jim Krane, an energy research analyst at Rice University Baker Institute in Houston, noted the conflicting interests of authoritarian rulers and the people. “It is a really tough issue because the interests of the ruling elites run contrary to the interests of citizens,” he pointed out. “The ruling elites are all dependent on oil rents for the survival of their regimes. They need the oil business to stay alive for them to stay in power. Their system is based on continued oil rent, but ultimately, the citizens’ long-term interests are with a liveable climate.”

Krane’s observation goes to the heart of much of the debate on climate change. Fixing global problems always rubs up against the interests of those who benefit from preserving the status quo. Rogue governments are not likely to be interested in solving global problems unless there is strong incentives for them to change their behaviour. This is true of many global issues, such as inequality. Although it’s widely known that a solution is to impose a global tax on capital, such a policy is likely to fail because high tax rates in one country are liable to be undercut by a competitor country.

This basic problem is doubly true when it comes to addressing the issue of climate change in the Middle East. The region’s autocratic regimes have become entirely dependent on the petro-economy for their legitimacy and survival. Believing it’s possible to address a problem as big as climate change without political reform in the MENA region is wishful thinking. Only free and open societies take decisions in the interests of the people. Authoritarian regimes who seek only their survival have no incentive to allow the kind of innovation and freedom required to address in any meaningful way an issue as serious as the survival of our species.