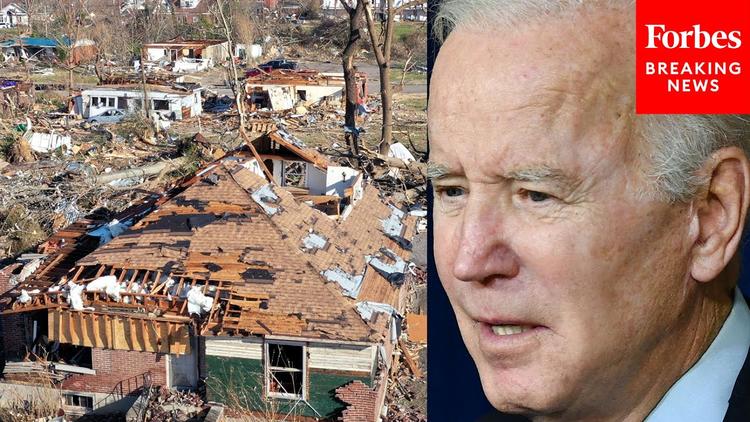 Ann Arbor (Informed Comment) – The string of horrific tornadoes generated by unrelenting thunderstorms over hundreds of miles in the southeast and midwest of the US has likely left over a hundred dead, and has wiped out portions of small towns.

As with any extreme weather event, it is natural to ask whether it is related to human-caused climate change, since we are pumping so much heat-trapping carbon dioxide into the atmosphere that it is rapidly changing our climate. This question came to President Biden in a news conference in which he characterized the massive string of tornadoes as an unimaginable tragedy:

“Q Mr. President, does this say anything to you about climate change? Is this — or do you conclude that these storms and the intensity has to do with climate change?

THE PRESIDENT: Well, all that I know is that the intensity of the weather across the board has some impact as a consequence of the warming of the planet and the climate change.

The specific impact on these specific storms, I can’t say at this point. I’m going to be asking the EPA and others to take a look at that. But the fact is that we all know everything is more intense when the climate is warming — everything. And, obviously, it has some impact here, but I can’t give you a — a quantitative read on that.”

Biden’s answer was careful and nuanced. That didn’t stop the climate denialists from jumping all over him. But he simply delivered the prevailing scientific consensus. Hurricanes in the Gulf of Mexico are more intense because of the climate emergency. The mega-drought in the southwest is more intense because of man-made global heating. About those there isn’t any doubt. Whether the carbon dioxide in the atmosphere is making tornadoes more intense is less clear, but there is some scientific evidence that it is.

Samuel J. Childs et al. point out in Weather, Climate, and Society that “A combination of favorable environmental ingredients must exist in sufficient quantities for the formation of a thunderstorm capable of producing large hail and tornadoes. These ingredients most foundationally include instability, vertical wind shear, moisture, and a lifting mechanism.” They predict at least one extra tornado per year by the end of this century in Colorado.

The eminent climate scientist Michael E. Mann at Penn State points out that the Gulf of Mexico has already heated up substantially over the past century, which provides the moisture to the lower atmosphere needed for thunderstorms in the southeast. It also provides more heat. More moisture and heat create the conditions for convection. The other ingredient is wind shear. Man-made climate change has pushed the jet stream, which flows west to east, further south occasionally. Where you have a westerly wind at lower altitudes, it will interact with the jet stream going the other way, producing wind shear and potentially a tornado. As Mann admits, climate models often predict an over-all decrease in shear. But, he says, there will be days where extra heat, moisture and shear do combine to create tornadoes, and they will be doozies. That is, you may get fewer but vastly more powerful tornadoes.

Childs and his colleagues say that over the next 80 years, “Changes in hazard frequency and spatial distribution may amplify human exposure up to 117% for tornadoes.” They point out that tornadoes and hail storms are among the most costly and devastating natural disasters in the U.S. In 2018, for instance, 50% of billion-dollar weather catastrophes were generated by tornadoes and hail storms.

Since tornadoes depend on the amount of moisture in the air and on the formation of a thunderstorm, models suggest that there will be more and more powerful tornadoes in some parts of the country, such as the southeast. Taszarek and his colleagues see some indication that the hurricane season in the southeast will switch from summer (when wind shear may be reduced by the hot air) to winter. In contrast, the western states will get less precipitation, and so may have fewer tornadoes.

So is global heating causing more or worse tornadoes? Professor Michael E. Mann thinks there is evidence for it, and he’s the one I trust on these issues.

Forbes: “Biden Discusses Climate Change After Dozens Are Killed In Kentucky By Tornadoes”