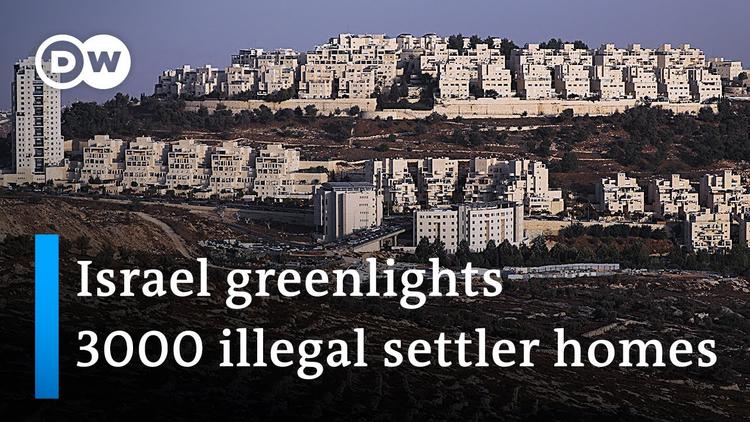 ( Middle East Monitor) – Israeli media have been pointing out that the Biden administration in Washington is not too bothered about the occupation state’s illegal settlement expansion. There is little reason to doubt the veracity of the claim. So far, US President Joe Biden has managed to maintain a fine balance between his agenda in favour of the two-state compromise, and his predecessor’s legacy which promotes Israel’s annexation of more Palestinian land.

As long as Biden adheres to the international consensus about the two-state compromise, all he has to do is issue periodic condemnations and look the other way, turning the proverbial blind eye to Israeli settlement expansion. After all, that is what the UN has been doing ever since it recognised Israel’s colonial existence.

Bonus Video added by Informed Comment.
Israel resumes building of settlements on the West Bank despite US denouncement | DW News

“We strongly oppose the expansion of settlements, which is completely inconsistent with efforts to lower tensions and to ensure calm, and damages the prospects for a two-state solution,” said US State Department spokesman Ned Price in October.

This perpetual “concern” can be seen from this statement as saving and perpetuating the rhetoric of two-state diplomacy. Settlements are not opposed because of the dispossession of the Palestinians from their land; that consequence has already been cloistered within the humanitarian agenda. The international community bases its relevance to the issue upon two-state politics, as does the US. Hence the tactic of opposing just one fragment of the entire series of repercussions as a result of settlement expansion and de-facto annexation. Whenever the two-state compromise is mentioned, the Palestinian people rarely feature. It is safe, therefore, to state that the paradigm does not exist to grant Palestinians their rights, but to maintain international interference so that the Palestinians are forever unable to claim their legitimate rights to their land.

Last week, Israeli Defence Minister Benny Gantz reiterated the Biden administration’s rigmarole. Speaking to reporters in Washington, Gantz said that US officials do not criticise settlement expansion with the same fervour that they speak about the two-state compromise. The US, Gantz said, is concerned mostly with “maintaining a political horizon between us and the Palestinians open, and about not creating a reality that blocks such a horizon from developing.”

Even more telling was Gantz’s statement that that there are “lots of differences between what the US and Israel view as a two-state solution.” Taking into account that the two-state compromise has been declared obsolete and remains relevant only within international diplomacy, any purported differences about which Gantz speaks are purely hypothetical.

If the US does not care about settlement expansion, why would it be concerned about how the two-state paradigm is applied, considering that it is no longer viable and Israel is well on its path to de-facto annexation in any case? If the US and Israel are on the same page when it comes to preserving the Palestinian Authority and its compromised politics (and “sacred” security coordination with the occupation state), there is little difference in terms of the ultimate aim that Israel is aiming for, which is complete control over all Palestinian territory. The US certainly doesn’t seek an alternative reality, not when it is so heavily invested in Israel. It is only that Biden has publicly aligned himself with international consensus, while Israel has been publicly rejecting any political negotiation for a solution, which gives Gantz any reason to claim political divergence with Washington.