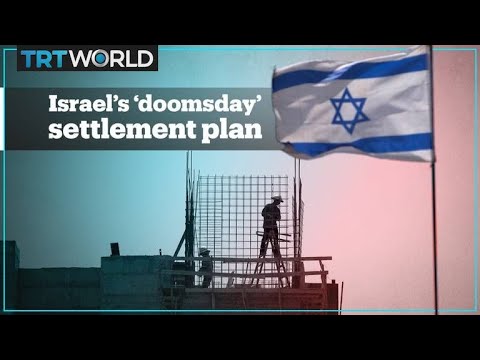 ( Middle East Monitor) – The Israeli coalition government headed by Naftali Bennett and Yair Lapid has set its sights on accelerating the implementation of the “Greater Jerusalem” project, which covers ten per cent of the area of the occupied West Bank and cuts it in two. The intention is to block the establishment of a viable Palestinian state.

The most dangerous aspect of this project is the construction of a settlement the size of a small city in occupied East Jerusalem, on the site of the Jerusalem International Airport, which was the only airport in the West Bank until it was closed — permanently, it now seems — by the Israeli authorities nearly two decades ago. The building works there are paving the way for the construction of this new settlement. Despite European and Palestinian objections, the Jerusalem Municipality Planning and Building Committee approved its construction, the first settlement of this size in East Jerusalem since the 1990s.

The major settlement projects in Jerusalem are intended to move large groups of illegal settlers to the heart of the city, and to strengthen Israeli control over large areas of land through the deployment of settlement outposts, army barracks and road networks that destroy any contiguity between the slivers of Palestinian territories left for the proposed “state”. According to studies and research, most Jerusalemites live in “Area B” according to the Oslo Accords, which represents less than 9 per cent of the governorate’s lands. Most of Jerusalem is classed as Area C”, over which Oslo granted full administrative and security control to Israel.

Studies show that the most dangerous settlement projects took place after the occupation of East Jerusalem, including the Old City and Al-Aqsa Mosque, in 1967. The subsequent “metropolitan” project of Greater Jerusalem together with the Apartheid Wall have isolated around 150,000 Palestinians outside the municipal boundaries of Jerusalem. Three massive settlement blocs have been annexed as part of Jerusalem: Ma’ale Adumim, Givat Ze’ev and Gush Etzion. These illegal settlements are inhabited by around 165,000 settlers and there are approximately 236,000 settlers in East Jerusalem (within the municipal boundaries). There is also danger in the E1 project, which prevents any geographical contact between Palestinian communities in East Jerusalem, while research has recorded eleven settlement outposts and complex road networks that penetrate Jerusalem land.

The city represents a connection point between the most important bypass roads that cut through the West Bank from north to south, and from east to west, such as Street 60 and Street 1. There are eight military bases in Jerusalem, as well as thirteen fixed military checkpoints. This systematic policy confirms the danger of the Israeli plot to Judaise the city and change its demographic, geographical and historical structure.

Successive Israeli Labor, Likud and coalition governments adopted a consistent policy towards Jerusalem, represented by the reinforcement of Israeli-Jewish control over the city and its surrounding areas, as well as strengthening its physical unity. This policy still aims to expand the city’s borders towards the east and prevent it from being divided, and thus separating it from its Palestinian hinterland.

[Israelization] has been implemented through a number of measures, plans and projects adopted by Israeli governments over the past 44 years. They were embodied in the implementation of intensive settlement projects and plans within and around the city; the seizure of private and endowment Palestinian land and property; the restrictions placed on Palestinian construction projects (including homes and house extensions); and the disruption and prevention of direct transport and other links between the Palestinian neighbourhoods within the city, and between the city and its Palestinian hinterland.

Israel has also worked to expel as many of the city’s Palestinian residents as possible, withdraw their identity cards that qualify them to live inside Jerusalem, and impose strict procedures for entering and leaving the city. Meanwhile, a policy of apartheid and ethnic cleansing is being imposed in Palestinian neighbourhoods, including Sheikh Jarrah and Silwan. Israel not only wants to isolate Jerusalem from the West Bank and change its identity, but it is already doing it.

This article first appeared in Addustour on 29 November 2021