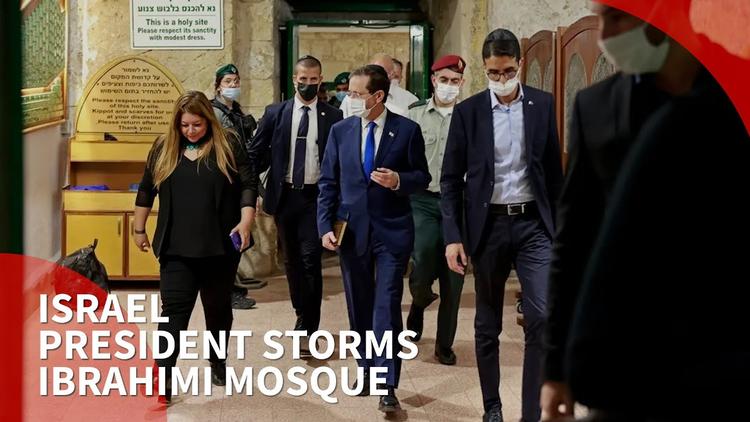 ( Middle East Monitor) – Israeli President Isaac Herzog chose to celebrate the Jewish Hanukkah holiday — the “Festival of Lights” — at the Ibrahimi Mosque in occupied Hebron, accompanied by a group of settler leaders. “The historical affinity of the Jewish people to Hebron, to the Cave of the Patriarchs [underneath the Ibrahimi Mosque], to the heritage of our matriarchs and patriarchs, is not in doubt,” said Herzog. “Recognition of this attachment must be beyond all controversy.”

With this heavily-armed incursion, Herzog and the extremist settlers demonstrated their alignment with the most right-wing and extremist ideology in Israel, even though the president belongs to the nominally left-wing Labor Party, of which he was once the leader. It is clear that his visit to Hebron at this time was an attempt to show that he is the president of all Israelis, left and right, not least because the occupation government have announced the expansion of the Kiryat Arba settlement outside Hebron. Despite his Labor connection, was he, therefore, angling for approval from the far-right?

The message Herzog sent to Israelis, Palestinians and, indeed, the international community was that Israel is not even thinking about ending its occupation of the West Bank and East Jerusalem, but is going to continue to build and develop its illegal settlements, Judaise the occupied territories and kill a two-state solution once and for all. His visit to Hebron came on the eve of the International Day of Solidarity with the Palestinian People, which is ironic. There have been no official Palestinian responses acknowledging the threat to the Palestinian cause as a result of Israeli policies and crimes against the Palestinian people, whose legitimate national, political and human rights are violated systematically around the clock.

Prior to Herzog’s incursion at the Ibrahimi Mosque, there were threats, statements and slogans, part of which likened his visit to Ariel Sharon’s visit to Al-Aqsa Mosque in 2000, which sparked the Second Intifada. However, there was little action taken to try to prevent or disrupt the visit. I do not mean armed resistance, but peaceful protests, such as a large demonstration to block Herzog’s path and prevent him from visiting the heart of Hebron, at the very least. Where were the organisations that compete to issue statements and where was the Palestinian Authority that should have taken some sort of position on the matter if for no other reason than to save what it still believes is left of the fabled two-state solution; to keep the option alive and viable for the establishment of a Palestinian state on the territories occupied since 1967.

READ: A new strategy is needed before the complete Judaisation of the Ibrahimi Mosque

We have become mere chanters of slogans, apart from the heroes who confront the settlers in some hot spots such as the village of Beita, in the neighbourhoods of Jerusalem and in other places on a small scale. Even the resistance factions in Gaza are repeating themselves and have no agenda other than that followed during Israel’s military offensives, which does nothing to advance a political solution and end the hateful occupation. The factions have not even managed to help the Palestinians in the Gaza Strip to have the basic requirements for a dignified life. Apart from the slogans, the condition of the people has deteriorated, and they are seeking salvation from the economic, social and humanitarian crises at any cost. Unfortunately, Israel does not take us, our threats or our pleas seriously.

Nobody will take us seriously unless we change the reality in which we live on more than one level. The first key for change is national unity, which still seems to be out of reach. The second is to restore respect between the leaders and the people. This cannot be achieved through slogans; it needs tangible effort and starts with genuine reform of the decision-making processes and the institutions that govern the lives of the citizens. This requires elections and reform of the Palestinian institutions. There is a very important link between unity and reform.

The reality in which we live encourages not only Herzog, but also Prime Minister Naftali Bennett, Interior Minister Ayelet Shaked and other Israeli politicians, to speak openly and without shame or fear that a deal with the Palestinians is an impossibility; that the best solution is to continue normalisation with the Arab countries that are rushing towards Israel and forgetting everything else. Such Arab states have even forgotten their own Arab Peace Initiative.

This encourages Israel to implement the “deal of the century” on the ground, with a microstate in Gaza and largely non-contiguous Palestinian ghettos in the West Bank. The current Israeli tendency is to push the idea of a Gaza state, but it is holding back because of the Israelis being held in the coastal territory. The moment this issue is resolved, I believe that we will see the rapid implementation of this project, which has started slowly but is evolving constantly. As for the West Bank, including occupied Jerusalem, Israel aims to divide it and maintain control over most of the occupied territory, with annexation in all but name. Continuing with our slogans and the cycle of lies will be enough for us to lose everything.