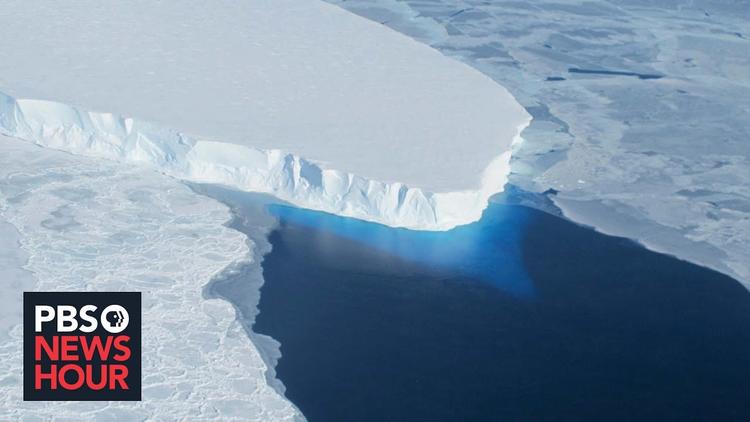 Ann Arbor (Informed Comment) – How fast will the sea level rise and how many people will that affect during the next 30 years? The answer to these questions means a lot to people living in New York, Miami and New Orleans, not to mention Mumbai in India.

We don’t have precise answers to these questions. But a December discussion at the American Geophysical Union suggested that the massive Thwaites glacier in Antarctica, the size of Florida, could plop into the ocean in the next 10 years, with the potential to set in train further collapses, raising sea level by as much as six feet. Thwaites itself could raise the level by two feet. A two meter sea level rise is half of everything the UN scientists in the IPCC report were expecting by the end of the century, which means they likely were way too conservative. One thing they could not foresee is that the South Pole has heated up 3 times as fast as other areas on earth in recent decades.

Global heating is being driven by 100 corporations supplying and encouraging the burning of petroleum, coal and natural gas, which emit billions of dangerous heat-trapping gases into the atmosphere annually. We are setting the sky afire every time we drive our cars or heat our homes.

Article continues after bonus video
PBS: “Melting of the Thwaites Glacier could rewrite the global coastline”

As noted, the really scary thing is, as Ella Gilbert explains, that the Thwaites glacier could pull a lot of other glaciers in after it and the whole east ice shelf could shatter into hundreds of icebergs!

How bad would a six foot rise be? It matters a lot whether people live in a low elevation coastal zone, with elevations of less than 30 feet and especially with elevations of less than 15 feet. One problem is that a lot of the data on elevation has been produced by satellite and other aerial surveys that tends only to get to the top of the tree canopy. So a lot of our maps are wrong, For instance, mangroves growing along the coast have a typical height of 90 feet, so obviously if you are measuring from their tops, you are doing it wrong.

Likewise, there are vast differences in the estimates for the density of populations in those low-lying areas.

A new article by Kytt MacManus and colleagues in Earth Systems Science Data* shows that you get significantly different answers depending on which major data set you use.

Their takeaway is that between 750 million and 1.1 billion people live in low-lying coastal areas and that 84% of them live in urban or semi-urban areas.

They find big differences in the estimates for how many people live at elevations of 15 feet or less along the world’s coasts, between about 300 million and 687 million. Their research favors the larger number, of two-thirds of a billion. This estimate is very important and very scary because all of those people are going to have to move house in the coming decades, and many of them may have to be on the move by 2050, only thirty years from now. Thirty years is just not that far away. People exaggerate how distant the future is, and play down distances in the past. The Gulf War was thirty years ago. The time between that event and now is how long we have before millions of people have to run for the high ground.