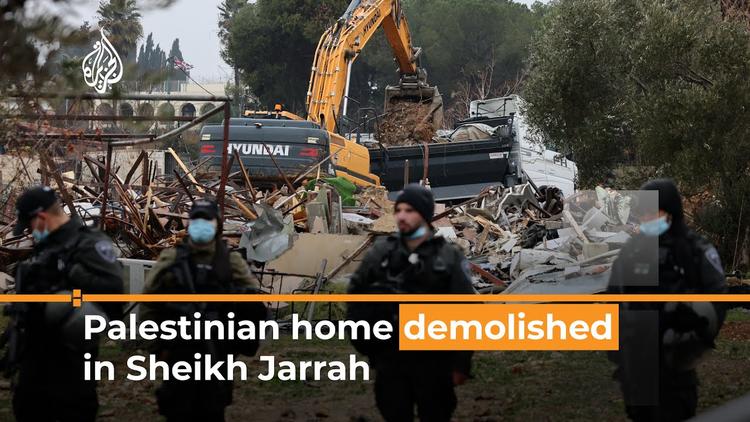 Ann Arbor (Informed Comment) – The Israeli newspaper Arab 48 reports that early on Thursday morning, Israeli security forces brought bulldozers to demolish the house in the Sheikh Jarrah neighborhood of Occupied East Jerusalem of the Salhiyeh family, having expelled the thirteen family members who owned it into the street on a freezing, rainy winter night.

The family said that a huge force of Occupation security police attacked their home and arrested family members found in the building after beating them.

The police fired flash bombs, then arrested all the members of the Salhiyeh family along with 25 other persons in the structure. Some of the family members were injured, but Arab 48 alleges that the security forces forbade ambulances to enter the area to treat them. When rescue workers did arrive to minister to the family members, they were expelled by force from the vicinity of the building while it was being emptied and then destroyed. Masses of security forces took up positions at the gates to the Sheikh Jarrah neighborhood and forbade entry into it during the expulsion and demolition operation.

If the Salhiyeh family is eventually released from jail, they will be homeless and on the street this winter.

Apologists for Israel’s actions say that the expulsion was legal, but everything the Apartheid regime in South Africa did to indigenous Blacks had also been legal. The action was not in fact legal, however, in international as opposed to racist Israeli law. (See below).

Israeli forces had attempted to expel the family from their home on Monday, but were forestalled when family members threatened to set themselves on fire.

The land on which the Salhiyeh family home stood was confiscated by the all-Jewish Jerusalem municipal government for “public purposes” and the Israeli courts backed the move three years ago.

East Jerusalem is recognized in international law and by the United Nations Security Council as occupied territory, and the 4th Geneva Convention and the Rome Statute forbid occupying authorities from expelling civilian residents. Israel has illegally annexed largely Palestinian East Jerusalem, however, defying international humanitarian law. This law can only be enforced through international sanctions, but the United States government consistently exercises its veto to prevent Israel from being sanctioned by the Security Council, and so Israeli authorities continue to act with impunity.

The Biden administration is reported to have remonstrated with the government of Naftali Bennett about planned expulsions of Palestinian families from their homes, but Bennett demonstrated on Thursday exactly how little respect he has for Biden or the United States, from which he receives $4 billion a year in direct payments from our tax dollars.

Several hundred Palestinians in East Jerusalem face expulsion at the hands of the Occupation government.

I have pointed out that

“Israel militarily occupied East Jerusalem and the Palestinian West Bank in 1967, after scheming to take it over for many years. It then illegally annexed East Jerusalem and part of the West Bank to its district of Jerusalem. In international law, occupation authorities may not annex occupied territory and may not flood their own citizens into occupied land. The 1949 Geneva Convention on the treatment of occupied populations was enacted in hopes of preventing a repeat of episodes such as Germany’s occupation of Poland, during which it transferred Germans to that country and expelled many Poles, in hopes of Germanizing it.”

The Israeli newspaper Arab 48 reports that Palestinian East Jerusalem families facing expulsion from their homes by Israeli squatters in the Sheikh Jarrah neighborhood have rejected the proposal of the Israeli Supreme Court to let them remain in their homes for some years, but without equity or recognition of their ownership of the property, so that they have to pay rent to Israeli squatters. They said in a statement, “We have unanimously rejected the settlement proposed by the Supreme Court of the Occupation, which would have made us akin to ‘protected renters’ from the settler organization Nahlat Shimon, and which would have paved the way gradually to the usurpation of our right to our land.”

The Supreme Court gave the Palestinians until this month to accept the proposed settlement.

Sheikh Jarrah is a neighborhood in East Jerusalem that has been inhabited by Palestinian Muslims since the 1200s. It grew up around the tomb of Husam al-Din al-Jarrahi, a personal physician to the great Muslim general Saladin (Salahuddin al-Ayyubi), who took Jerusalem back from the Christian Crusaders. He built a mosque and a Sufi center (Zawiya) there, and when he died his tomb became a place that people visited because of his reputation for piety.

In 1948, Zionist militias conducted a deliberate campaign of ethnic cleansing against Palestinians in what became Israel, forcibly expelling some 720,000 of them, many to the West Bank. The Jordanian government built homes for these refugees in Sheikh Jarrah, to which the families have deeds of ownership or acknowledged customary rights. When Israel seized the Palestinian territories in 1967 by aggressive military conquest, the Israel authorities began taking the stand that Palestinians have no right to their land and it can be stolen from them at will.

Militant Israeli squatters have targeted Sheikh Jarrah families for expulsion, laying claim to their land on the basis of 19th century claims and rejecting the legitimacy of the Jordanian housing project ex post facto. The squatter claims went to the Israeli Supreme Court, which tried to kick the can down the road by putting off deciding the fate of the Palestinian property owners for 15 years but essentially declaring that they were renters, not owners of the property and there on Israeli sufferance.

The neighborhood families said in their communique that “this rejection comes on the basis of our faith in the justice of our cause and our right to our homes and our homeland despite the entire absence of any tangible guarantees to reinforce our presence as Palestinians in Occupied Jerusalem on the part of any party or institution.”

In April, Jordan provided documentary proof that the Sheikh Jarrah families own their homes.