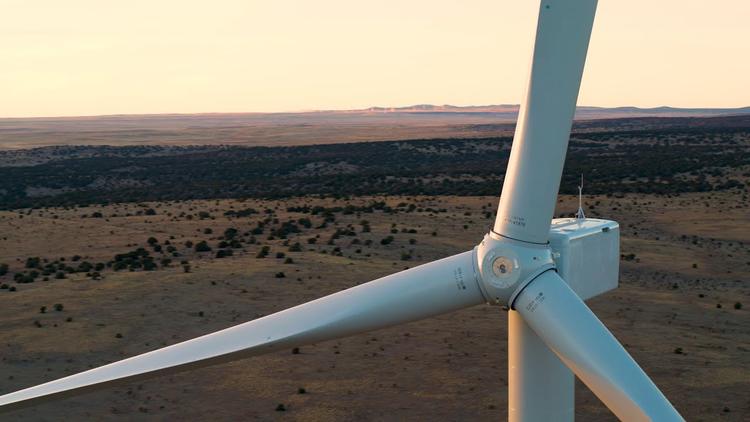 Ann Arbor (Informed Comment) – Pattern Energy Group has announced that its massive 377-turbine Western Spirit Wind facility in New Mexico, with a name plate capacity of over 1 gigawatt, has gone on line. It can provide electricity to 365,000 homes. Pattern also built a 155-mile 345 kV (Extra High Voltage) transmission line, which cost $1.8 billion. The total investment in the wind farm is $2.1 billion.

And this is only the beginning. Pattern is going to put another $6 billion into New Mexico wind projects.

Uteig, one of the subcontractors on the project, writes at their site, “The annual wind energy potential of New Mexico has been estimated to be 435 billion kWh. New Mexico has the potential to produce many times its own electrical consumption, which puts it in a position to export wind electric power.” Central New Mexico has the potential to be a wind powerhouse, and the state is ranked 12th out of 50 for wind power potential. The state only uses 23 billion kilowatt hours annually, so if its full wind potential were to be reached, it would have a lot left over to export.

All this is important because New Mexico now uses a lot of dirty coal as well as natural gas, which are dangerous heat-trapping gases that are boiling our earth. The state wants its electricity to be green by 2045, but obviously can and should get there sooner, and it has the potential to help other states do so, as well.

Although wind is intermittent as a source of energy, this wind farm is in a sweet spot for power generation and is expected to work 80% to 90% of the time in an average year, with the greatest production taking place in the morning and the evening and in winter months. Even at 80% of nameplate capacity, the gargantuan set of four wind farms, the largest renewables project in the United States, will put out as much electricity as a small nuclear reactor. Only, these facilities only took 15 months to build. They use giant GE wind turbines.

The New Mexico energy establishment already has experience with using batteries to offset renewables, having put in 300 megawatt hours of battery power for a 650-megawatt solar facility.

The four wind farms are in the center of New Mexico, in Guadalupe, Lincoln and Torrance Counties, and local people will benefit. The company writes, “Torrance, Guadalupe and Lincoln counties will be issuing Industrial Revenue Bonds, a unique financing mechanism in the State of New Mexico, for the Western Spirit Wind Projects. Although the counties are issuing the bonds, Pattern and its affiliates will pay 100% of the cost of these bonds resulting in approximately $3 million to local governments and schools over the next 25 years.”

The locals still own their land, and have full use of it. If they find mineral wealth on it, it is theirs, as long as digging it up doesn’t damage a turbine. Likewise, Pattern says, “the land will still belong to the landowners and can be used for activities such as grazing and other activities that do not interfere with the operation of the facility. Ranching and grazing are totally compatible and will not be restricted. Less than 1% of the total easement area for the project will be occupied by structure footprints.”

I was born in New Mexico, though I did not grow up there– I always love going back. It is so beautiful, with a rich tapestry of cultures. I read that Guadalupe, for instance, is thinly populated with something over 4,000 people. They are mostly Hispanic or Latino. Some of them are Hispanos, tracing their heritage to colonial Spain. That is, for them Americans of northern European heritage are newcomers and immigrants, the opposite of the narrative about Latinos being immigrants. Many Hispanics in New Mexico consider themselves “white.”

Despite its beauty, New Mexico is one of the poorer states in the union, with a mean household income about $14,000 a year lower than the U.S. in general. That these counties and schools will get that kind of income from this project is wonderful news.

New Mexicans are now not only making power for themselves, they are selling electricity to Los Angeles and San Jose, the way Saudi Arabia sells California petroleum. Only, California is gradually dumping Saudi and other oil for electric cars, and New Mexico will help ensure that the electricity that powers those vehicles is green.