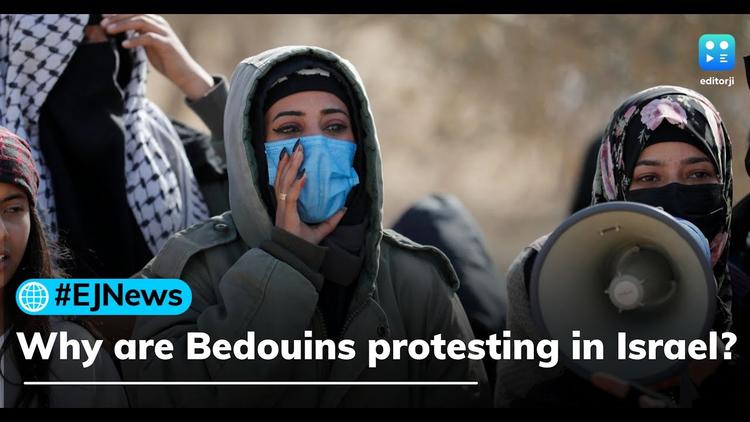 ( Middle East Monitor ) – After mass protests by Arab residents and threats by Arab parliamentarians, the Israeli occupation government decided on Wednesday to suspend the major Jewish National Fund (JNF) project of planting trees in the Negev. The JNF is a quasi-governmental body which oversees thirteen per cent of the land in Israel to be used by Jews exclusively. It started its planting project on Sunday; worth NIS150m ($48m) it is intended to afforest large swathes of the land in the Negev under the supervision of the Israel Land Authority.

The Israeli government claims that this is state-owned land even though it includes many Arab villages, which the government has never recognised and so they remain disconnected from public services such as the water and sewage networks, the electricity grid and telecommunications access. However, left-wing Israelis claim that it is land at the heart of a dispute between the government and local Arab residents. Local Palestinians know that it is their land on which they have lived for centuries.

Planting trees and turning the desert into a green area and farmland is something good that everyone should be happy about. So why do the local Palestinian Arabs object?

From the 1940s onwards, the Zionists occupied Palestine and expelled the local population in huge numbers, replacing them with Jewish immigrants who assumed “ownership” of the Palestinian land and homes. Some Palestinians resisted the violent ethnic cleansing; some moved to nearby areas; some fled to areas that had not been occupied in 1948; and some fled the country altogether.

Article continues after bonus IC video
Editorji: “Who are Bedouins and why are they protesting Israel’s tree plantation drive”

Ever since, the occupation state has been treating the Jewish immigrants as genuine citizens, while the original inhabitants who managed to stay in their homes in the land occupied since 1948 are “unrecognised” residents or, at best, second-class citizens. They are referred to as Arab Israelis.

At that time, the JNF carried out forestation projects over large areas of the occupied land, including on the ruins of the deserted Palestinian villages in order to change the facts on the ground and turn Palestine into Israel. My neighbour Mustafa Abul Qumsan, 86, was expelled from his village in 1948, when he was 12 years old. “Years after the occupation,” he told me, “I went to visit my village. I did not find our homes. I found a forest.”

The Palestinian Arab residents of Israel know through experience that forestation projects are used to cover the evidence of the ethnic cleansing of the local Palestinians. Regardless of any economic or environmental reasons for forestation in the Negev, therefore, the main purpose is to reinforce Israel’s grip on the occupied land ahead of the potential expansion of the local Palestinian Arab population in the area.

Israel has been trying since 1948 to expel the local population from areas across occupied Palestine, especially the Negev. In some areas, they remove them by force or demolish their homes. The “unrecognised” village of Al Araqib, for example, has been demolished by the Israelis more than 150 times since 2011, and rebuilt by its residents on every occasion.

To persuade the Arabs to leave their villages — and give ethnic cleansing a glossy veneer — Israel has on several occasions proposed that they should move to urbanised areas with high rise blocks where they can enjoy public services. All such proposals have been rejected, because the local people know that they are a ruse to uproot them from their own land. This is contested by Israeli officials, of course.

“There’s no expulsion,” Alon Tal MK told the Times of Israel. “These are national lands; we have a right to protect them for all citizens, and one way to do that is by planting trees.” He has overseen forestation at the JNF for more than a decade. “The Israel Land Authority wants to hold land, which is their job. Bedouins [Palestinians in the Negev] are squatters, and one way to make them stop doing that is by planting trees.” The Knesset member’s words expose the real intention behind the forestation plan of the Israeli government and the JNF.

The Palestinians in the Negev lived peacefully on their land for centuries before the Israeli occupation. Their presence alone signified ownership; they neither needed nor had (in most cases) documentation to prove this. The occupation state, however, demands to see such proof of ownership. It has imposed many oppressive laws intended to strip the Palestinians of their ownership rights, and knows full well that most in the Negev have no title deeds or similar documents.

Since the 1970s, dozens of Palestinian Arabs have gone to court in an effort to prove their ownership of their land. They have either lost their cases or the courts have delayed the process. In the meantime, the occupation authorities have been speeding up the theft of the land by destroying the unrecognised villages, making the living conditions even worse, blocking the building of new homes and carrying out forestation and urbanisation projects.

“Today, there are about 125,000 acres of contested land,” explained Hanna Noach, who co-directs the left-wing Negev Coexistence Forum. “Bedouins are summoned to court and asked to prove their ownership, but other than oral tradition, they often have nothing to show.”

The ideological aspect of this old-new land grab is obvious. Far-right extremist Itamar Ben Gvir is a parliamentarian and head of the Otzma Yehudit party, which is openly anti-Arab. Forestation is a tool for Israel’s ethnic cleansing of Palestine, not an objective in itself.

“Today, the order of the hour is to reach the Negev and take part in the important mitzvah [commandment] of struggling for the Land of Israel,” he was quoted as saying by the Jerusalem Post. He added that he has spoken with a religious-Zionist authority, Rabbi Dov Lior, the former chief rabbi of Hebron and Kiryat Arba, “Who ruled that it was permissible to plant trees for the struggle for the Land of Israel, and called on all Knesset members to come to the Negev to make the desert bloom.”

According to Israeli Communications Minister Yoaz Hendel, writing on Facebook: “There are many areas in the country where, when you do not cultivate the land, you lose it… On the eve of Tu Bishvat [a Jewish holiday celebrated as an ecological awareness day], agriculture should be recognised and planting is the solution everywhere, and so it will be done this year as well.”

Israel’s intentions are very clear. It wants as much Palestinian land as possible, with as few Palestinians living on it as possible. That’s what forestation is all about. Ecology and the environment have nothing to do with it. The Palestinians understand this; we all see it; but nobody does anything to stop it, leaving the local residents to face the Israeli occupation authorities on their own while the complicit international community sits and watches.