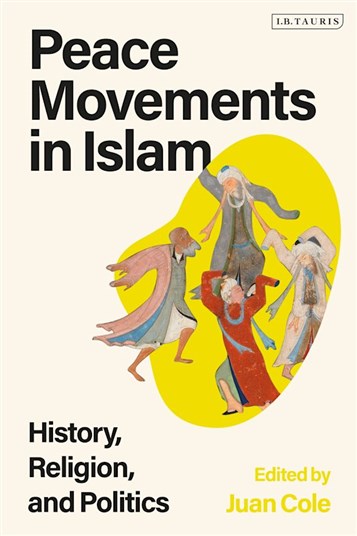 Via: Texts out Now: Jadaliya

(Excerpt from the Jadaliya Interview – go to original site for full text.):

Jadaliyya (J): What made you edit this book?

Juan Cole (JC): I began this project in 2015 because of the avalanche of writing in the United States and Europe about the ISIL terrorist group in Iraq and Syria and the constant implication, or even assertion, that such cult-like groups were somehow an expression of an Islamic “essence” that is naturally violent and barbarous. Of course, this assertion was shared by the ISIL terrorists themselves, though their extremism was so thoroughly rejected by other Muslims in the region that the latter largely crushed it—with some US, European, and Russian help. I did not deny that violent movements had arisen within Muslim societies, but I believed that there was an over-emphasis on them after 9/11, to the extent that our historiography and social science were unbalanced in dangerous ways. I was aware of many peaceful movements in Islamic history and wanted to bring together specialists to write about them in a systematic way. My colleague Samer Ali and I succeeded in gaining funding from the International Institute at the University of Michigan for two conferences, from which the bulk of the chapters are drawn.

J: What particular topics, issues, and literatures does the book address?

JC: South African anti-Apartheid activist Rashied Omar wrote for the book about the way in which Muslim peace work intersects with the ideas of Johan Galtung about positive and negative peace. I contributed a chapter on peace verses in the Qur’an itself. Asma Afsaruddin wrote about peaceful struggle as a principle in early Islam. My colleague Alexander Knysh wrote about Sufi principles of internal peace and what it meant for their action in the world. Rudolph Ware told us about the Murid Sufi order in French colonial Senegal, led by Ahmadu Bamba, which argued that the conditions for jihad as understood in medieval times no longer obtained in the modern world. We have two papers on the Muslim modernist, Rashid Rida, one of which by Elizabeth Thompson argues that after World War I Rida foresaw the Middle Eastern Muslims joining a new peaceful world order of liberal nation states but he along with many other Muslim were pushed toward a more fundamentalist view by the betrayals of Versailles, which allowed Britain and France to colonize the Middle East. The other, by Mohammad Khalil, shows that Rida believed, like many Muslim thinkers, in a form of universal salvation available also to non-Muslims. James Rowell explored the thought of Abdul Ghaffar Khan, who was in the same circle as Mahatma Gandhi and who argued for Muslim nonviolent noncooperation, based on the Qur’an, against British colonialism. Sherman Jackson told the remarkable story of how, in the early twenty-first century, Egypt’s al-Gama`a al-Islamiyyah repented of their former violence and issued a set of works reinterpreting Islam in a peaceful way. Zilka Šiljak wrote about Muslim Bosnian women’s peace groups after the war. Grace Yukich talked about peaceful forms of Muslim-American activism during the Trump era.

J: How does this book connect to and/or depart from your previous work?

JC: This book is in some ways a complement to my 2018 monograph, Muhammad: Prophet of Peace amid the Clash of Empires (Bold Type Books). There, I was concerned with reconsidering the Qur’an and the life of the Prophet in the context of late antiquity and with arguing that the Abbasid-era conception of both as warlike distorted the picture that can be recovered from the Qur’an itself. I see both peace and just war in the Qur’an, where other biographers have seen only militancy. Both recent works are a departure from my writing in 2000-2017 on al-Qaeda, the Taliban, and Khomeinism in journal articles, journalism, and in my books, Sacred Space and Holy War and Engaging the Muslim World. Again, the point is not to essentialize Islam or Muslim movements one way or another, but to gain a contextual understanding of their whole range.

J: Who do you hope will read this book, and what sort of impact would you like it to have?

JC: The book is written accessibly and is intended for a general audience, but it has the scholarly apparatus and rigor that will make it interesting to academics, particularly those in the humanities and social sciences, as well. It would be a great classroom text for undergraduates and is almost unique for that purpose.

Read the rest at Jadaliya

In chapters that fall in Theodor Nöldeke’s third Meccan period (618-22?), this general principle is presented in a more elaborate manner. After a stock scene in which the pagans are consigned to hellfire and angels bestow blessings on the believers in paradise, Distinguished 41:33-35 observes, “Whose discourse is more beautiful than one who calls others to God and performs good works and proclaims, ‘I am among those who have acquiesced in the monotheist tradition (min al-muslimin)’? The good deed (al-hasana) and the evil deed (al-sayyi’a) are not equal. Repel (idfa`) the latter with what is better (ahsan] and behold, it will be as though the one, with whom you have a mutual enmity (`adawa), is a devoted patron (wali hamim). Yet to none is this granted save the patient (alladhina sabaru), and to none is it granted save the supremely fortunate (dhu hazzin azim).” This remarkable verse goes beyond counseling gracious withdrawal from and forgiveness of foes to urging doing good toward them and returning their evil deeds with good ones, which over time has the prospect of winning them over and making them patrons rather than enemies. The elative ahsan wielded in that cause may here be a superlative even though it is indefinite, so that the phrase means “that which is best” or “the greatest good” because it is elliptical, leaving out the rest of the sentence. That is, it is implied that the action is better . . . “than any other deed” (just as “Allahu Akbar” implies that God is most great, i.e. that he is greater than everything else, not merely that he is “greater”). Doing “the best” by evildoers is implicitly contrasted not only with “the evil deed” (al-sayyi’a) but also with the mere “good deed” (al-hasana). It is by performing this implicitly superlative deed that is “better” (than any other) for evildoers that one can transform them from inveterate enemies into patrons and supporters. This accomplishment, however, depends on the believer having a vast store of forbearance and being extremely fortunate. It is marked as no ordinary spiritual achievement, to do the supreme good for those who have done evil to you. Tabari gave a saying he had ultimately from Ibn `Abbas in interpretation of the verse, “Repel the latter with what is better:” He said, “God commanded the believers to meet anger with patience and an even temper (hilm), and to meet mistreatment with forgiveness. If they do this, he safeguards them from Satan, and their enemies will yield to them, as though a devoted patron.” Others, Tabari said, interpret it to mean, “Push back with peace (al-salam) against the abuse of someone who mistreats you.” The verse only mentions acting in an exemplary way, but Tabari gives many quotes from exegetes who concur that it is the proffer of peace that is being spoken of when “the better” or “best” is commanded.

This quranic assertion that doing good to hostile others can over time have a transformative effect on them addresses one critique of the Christian form of this principle, which is that “love your enemies” is one-sided rather than dialogical.

Read the rest at Jadaliya