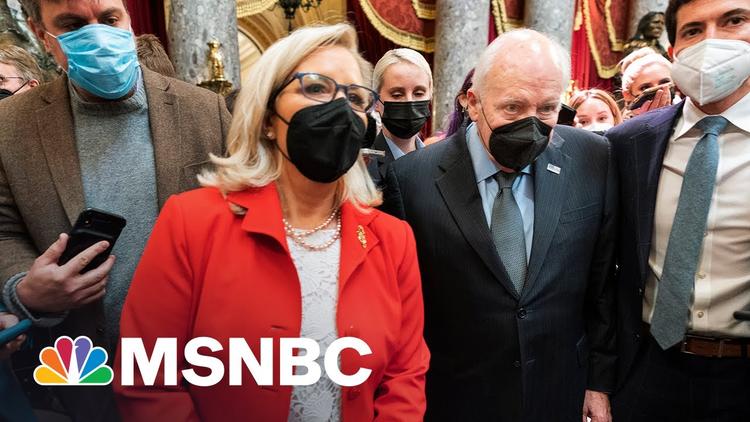 Ann Arbor (Informed Comment) – Former Vice President Dick Cheney accompanied his daughter, Rep. Liz Cheney (R-WY), to the Capitol on Thursday to join the moment of silence in commemoration of the Jan. 6 insurrection. They were the only Republicans to attend.

The elder Cheney was quoted as saying of the Republican House leadership, “It’s not leadership that resembles any of the folks I knew when I was here for 10 years.” He released a statement saying, “I am deeply disappointed at the failure of many members of my party to recognize the grave nature of the January 6 attacks and the ongoing threat to our nation.”

I don’t want to be churlish. I don’t agree with the Cheneys about virtually anything in politics. But I do give credit to Rep. Liz Cheney for making a stand against the Trump-provoked 1/6 insurrection, and against the dishonesty and authoritarianism of Trump in general. You can relate to people as human beings, and on that level, you have to admire her courage. I wonder whether a Trump state like Wyoming will reelect her. There are lots of Republican representatives in Congress who agree with her, but who will not say so publicly because they don’t want to lose their jobs. Liz Cheney has more moral courage than they do, and she should be applauded for standing up and doing the right thing.

Her father, Dick Cheney, was there to give support to his daughter and to slap minority leader Kevin McCarthy around for his ass-kissing of Donald Trump. People keep saying McCarthy kissed the ring, but Trump is not the Pope and we know what McCarthy is really kissing. Dick Cheney was seen talking to Nancy Pelosi and other representatives. Except for Liz, all the others at the ceremony were Democrats. That’s how pusillanimous the Republicans are.

But when I saw Dick Cheney’s remark that “It’s not leadership that resembles any of the folks I knew when I was here for 10 years,” I knew that I would have to be churlish after all.

The remark reminded me of what Jeffrey Goldberg wrote for the New Yorker in 2005 about former National Security Adviser Brent Scowcroft, who served in the Bush senior administration with Cheney, and who had advised against launching a war on Iraq. Scowcroft feared that Cheney had gotten himself surrounded by blinkered hawks like the Princeton University professor Bernard Lewis:

“Bernard Lewis says, ‘I believe that one of the things you’ve got to do to Arabs is hit them between the eyes with a big stick. They respect power.’ ” Cheney, in particular, Scowcroft thinks, accepted Lewis’s view of Middle East politics. “The real anomaly in the Administration is Cheney,” Scowcroft said. “I consider Cheney a good friend—I’ve known him for thirty years. But Dick Cheney I don’t know anymore.”

Now Dick Cheney says he doesn’t know the House Republican Party any more. Where will this ratcheting of unrecognizability end up? The Republicans are going farther right every decade, such that the previous decade’s leaders no longer know them. At this rate they’ll be Attila the Hun sacking what’s left of civilization by 2030.

So here comes the churlish part: Dick Cheney paved the way for Trump and the Capitol Insurrection.

I wrote for Salon about some of Cheney’s antics even once he left office. Cheney championed the use of torture by the U.S. government, and never recanted. Deliberate, in-your-face disregard for international human rights laws and norms has become a signature of the GOP. Cheney honed it to a fine art.

Cheney attacked Colin Powell, questioning his credentials as a Republican, and promoted Rush Limbaugh as the leader of the party (yes).

Then Rush Limbaugh turned into the tip of the spear for the presidency of Donald Trump. Limbaugh compared the Capitol Insurrection to the American Revolution. Cheney promoted Rush. This is what happens when you push the country into the arms of far right dittoheads.

As for Cheney’s view of Powell, that black and white view of the world, so that the first Black Republican Secretary of State is excommunicated for not being right-wing enough, is very Trumpian.

Colin Powell got tired of being kicked out, so during the Trump years he declared himself no longer a Republican.

Now it is Liz Cheney whose party credentials the other Republicans are questioning. Can Dick Cheney see how he personally paved the way for this situation?

Today’s Big Lie is that Trump won the 2020 election. The Big Lie in 2002 was that Iraq was “fairly close” to having a nuclear weapon. The author of that Big Lie? Dick Cheney.

When you get a party used to swallowing blatant falsehoods, eventually it will lose its grip on reality. Dick Cheney started the GOP down that road.

So, good for him that he stood with his daughter and with Nancy Pelosi to condemn the Trump conspiracy against America. But he is part of a longer-running such conspiracy that he had never renounced or apologized for, which makes his stand on Thursday ring a little hollow.