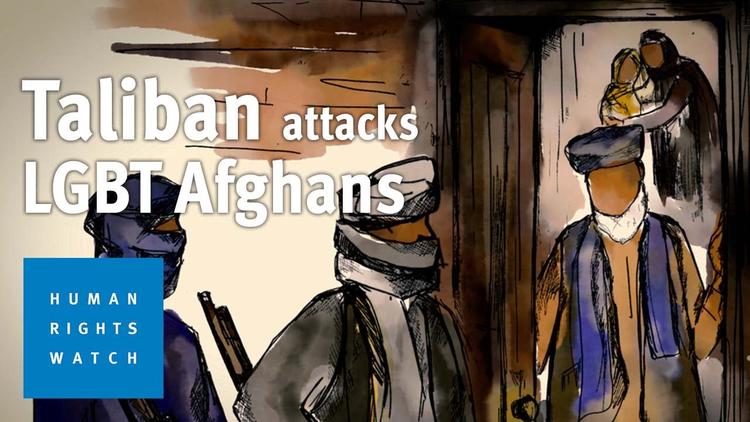 (Human Rights Watch ) – Lesbian, gay, bisexual, and transgender (LGBT) people in Afghanistan, and others who do not conform to rigid gender norms, have faced an increasingly desperate situation and grave threats to their safety and lives since the Taliban took full control of the country on August 15, 2021.

Many of those interviewed reported being attacked, sexually assaulted, or directly threatened by members of the Taliban because of their sexual orientation or gender identity. Others reported abuse from family members, neighbors, and romantic partners who now support the Taliban or believed they had to take action against LGBT people close to them to ensure their own safety. Some fled their homes from attacks by Taliban members or supporters pursuing them. Others watched as lives they had carefully built over the years disappeared overnight and found themselves at risk of being targeted at any time because of their sexual orientation or gender identity.

Afghanistan was a dangerous place for LGBT people well before the Taliban recaptured Kabul in 2021. In 2018, the government of President Ashraf Ghani passed a law that explicitly criminalized same-sex sexual relations, and the previous penal code included vague language widely interpreted as making same-sex relations a criminal offense.

The Taliban have echoed the previous government’s support for the criminalization of same-sex relations, with some of their leaders vowing to take a hard line against the rights of LGBT people. A Taliban spokesperson told Reuters in October, “LGBT… That’s against our Sharia [Islamic] law.”

Despite making repeated pledges to respect human rights, the Taliban have engaged in widespread rights abuses since retaking control of the country, including revenge killings, systematic discrimination against women and girls, severe restrictions on freedom of expression and the media, and land grabbing. The danger now facing LGBT people in Afghanistan—in an environment devoid of legal protections, under authorities that have explicitly pledged not to tolerate LGBT people—is grave.

Most interviewees believed their only path to safety was to relocate to a country with greater protections for the rights of LGBT people, but so far very few LGBT Afghans escaping Afghanistan are known to have reached a safe country. Only the United Kingdom has publicly announced thus far that it has resettled a small number of LGBT Afghans.

Those who have fled to nearby countries remain in a tenuous situation. Most of the countries with which Afghanistan shares major borders, including Iran, Pakistan, Turkmenistan, and Uzbekistan, also criminalize same-sex relations, as do some other countries in the region; in Iran same-sex sexual acts can be punished by death.

The evacuation of people at extreme risk in Afghanistan is nowhere near over. All governments have an obligation to promptly and fairly process asylum claims, including those from LGBT Afghans who fear persecution under the Taliban. Whether LGBT people are seeking to flee directly from Afghanistan or from a nearby country, nations supporting the human rights of LGBT people should create safe and legal pathways for entry and assist in resettlement. Nations that sent military forces to Afghanistan over the last 20 years have a particular responsibility to prevent people who face the risk of persecution from becoming stranded.

But evacuation will not be an option for most LGBT Afghans: it is challenging for Afghans who face persecution on any grounds to obtain the documentation and financial resources needed to leave the country, and LGBT people face additional barriers. For those who cannot or choose not to leave the country, it is urgent that their rights be protected within Afghanistan. The Taliban should end abuses against LGBT people and revise laws and regulations to ensure their equal rights. United Nations bodies and concerned governments should use whatever diplomatic leverage they have with the Taliban to do so. Social media platforms should urgently assist LGBT Afghans who are being targeted via their platforms. International donors and aid agencies should make delivering services that assist and protect LGBT people a priority, even when Taliban abuses complicate doing so.