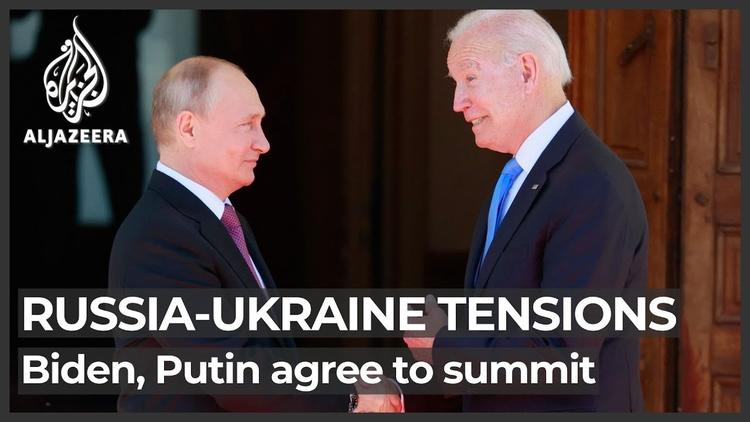 Ann Arbor (Informed Comment) – The Hill reports that Sen. Ted Cruz (R-TX) is saying that Joe Biden is the best thing that ever happened to Russian President Vladimir Putin.

Cruz is trotting out the tried and true Republican tactic of Chickenhawk Macho. He does not have any credibility in this regard, since he ran away to Cancun to escape the Texas electricity blackouts (caused by natural gas plant failures) during a cold snap last year this time, as millions of his constituents suffered without heat. This behavior gives an excellent indication of how he would behave on a battlefield, something he’s never seen in his life. Putin would snack on Cruz’s lily liver as an appetizer.

The United States is lucky to have the level-headed Joe Biden in office during the current crisis between Russia and the Ukraine. Biden’s long foreign policy experience and his ability to rally allies, along with his careful but firm handling of Russia, contrasts wildly with the erratic and cowardly performance of his predecessor, the head of the Republican Party, Donald J. Trump.

Trump told the G7 that the Crimean Peninsula, which Putin seized from Ukraine in 2014, was Russian because it is Russian-speaking. He revealed classified intelligence secrets to the Russian Foreign Secretary, and ordered the CIA to share more. He defended Putin from charges that the latter interfered in the 2016 US election (the GRU or military intelligence certainly did interfere). Trump continually rolled over for Putin.

We are lucky that Putin did not just ask for Alaska back, since Trump would have gladly relinquished it.

Trump was a coward with other world leaders, as well. When Turkish President Tayyip Erdogan demanded that Trump get US troops out of northern Syria and allow the Turkish army to attack US allies, the Kurdish troops in the Syrian Democratic Forces who defeated the ISIL terrorist organization alongside US Special Forces, Trump turned tail and gave Erdogan the green light. US troops withdrew to Iraq, being pelted with rotten eggs and vegetables by the disappointed Kurdish population, and then Turkey invaded, displacing tens of thousands of Kurdish villagers who had stood with the US against ISIL when Turkey, Saudi Arabia and other so-called allies would not.

Secretary of Defense James Mattis tendered his resignation to Trump over the betrayal of America’s Kurdish allies.

So the Republicans’ fantasy that they are the tough guys and Democrats are weak on national security has been blown out of the water by their ass-kissing of Coward-in-Chief Trump, and they should be red-faced with embarrassment to bring up national security after having put a man in the White House who tried to overthrow the US government. That’s national security?

As for Biden, he has moved expertly to confront a dangerous and difficult situation, one that he actually understands. Trump seems to have thought that Putin stole the Crimea from Barack Obama. Look it up.

Vladimir Putin provoked the current crisis by massing combat troops on Ukraine’s borders. Russia faced no danger from Kyiv. I presume he is smarting from losing his asset, Trump, in the White House, and it testing Biden’s mettle as the new president.

Biden has responded with diplomacy and has agreed to meet Putin for a summit on condition that Russia not do anything drastic before then. As Winston Churchill said, “Meeting jaw to jaw is better than war.” Unlike Trump and Cruz, Churchill was not a coward.

Biden had earlier responded by making it clear that the US will not go toe-to-toe with Russia in the Ukraine with its own troops, since that would risk nuclear holocaust. He was criticized for saying so, but it is the truth, so why not be transparent? Despite the Washington elite’s current meme about spheres of influence being passe, in fact such spheres are very much alive. Observers have pointed out that the US still enforces the Monroe Doctrine, which made the entire Western Hemisphere a US sphere of influence. In contrast, Eastern Europe has never been a US sphere of influence and the US won’t go to war with another nuclear power over a country that is not even a formal US ally.

Not only would Biden not fight such a war, but Republican President Dwight Eisenhower, the former Supreme Allied Commander who helmed the successful effort to defeat the Thousand-Year Reich in Europe, sat by and let Moscow invade Hungary in 1956. Not a US sphere of influence, any more than Czechoslovakia was in 1968 when President Lyndon B. Johnson kept on the sidelines as Moscow put down the Prague Spring.

Biden has also, however, armed Ukraine, sending two big shipments of arms, the most recent amounting to 80 tons. He has convinced some other NATO allies also to send arms. While such shipments are symbolic, they are powerful symbols of resistance, and it may not be easy for Russia to invade and immediately sequester all the arms depots, in which case they will become resources for a guerrilla resistance.

Since Biden has correctly forsworn military intervention, his other deterrent option is to make it crystal clear to Mr. Putin that there will be severe economic consequences for any invasion, and what those will be.

Biden is threatening to do to Russia what the US did to Iran on more than one occasion, which is to entirely disrupt its energy sales and perhaps even kick it off the world’s banking exchanges. The Russian methane gas industry had been salivating over the Nordstrom II pipeline through the Baltic Sea to Germany, and Biden has made it clear that an invasion of Ukraine will kill that project. Russia’s petroleum, like that of Iran, is a stranded asset and probably cannot be sold after ten to fifteen years, so if the industry goes under sanctions during its last profitable years, it will be a significant blow to Russia’s future.

The Magnitsky Act also allows Biden to sanction Putin and his circle of oligarchs, something the Russian president appears genuinely to fear.

If anything, Biden should be criticized, contrary to what Cancun Cruz says, not for being insufficiently belligerent with Putin but for so far declining to seek a compromise. Ukraine is not a serious candidate for membership in NATO for many years, so why not say so, instead of insisting that Kyiv is free to join any time? Germany opposes its candidacy, which makes the question moot. The US insistence that NATO could still expand further apparently enrages Putin and the Russian elite. Why pursue it? Is it really worth a war to scoop up Georgia in the Caucasus into NATO? I’m old enough to remember the Cold War and what I remember was that Austria was neutral. I can’t remember anything bad happening to Austria or anybody else because of that.