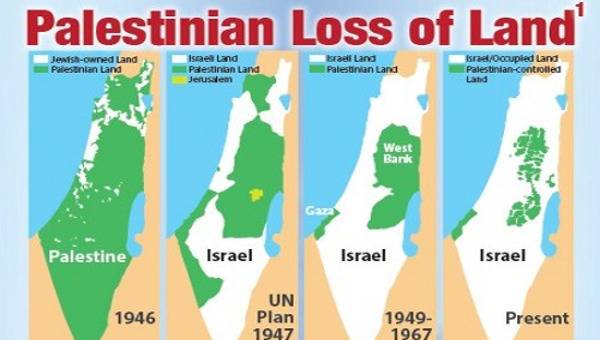 Ann Arbor (Informed Comment) – The Israeli state has won the trifecta of condemnation by major human rights organizations, as, on Tuesday, Amnesty International joined with Human Rights Watch and B’Tselem in calling Israeli rule over the 5 million Palestinians of the Occupied Palestinian Territories a form of Apartheid.

Amnesty carried out its investigation and analysis for four years, from 2017 until the end of 2021, so they did not exactly jump to conclusions. Amnesty carefully defines the crime with which it is charging the Israeli authorities. Apartheid, they say, is committed “when any inhuman or inhumane act (essentially a serious human rights violation) is perpetrated in the context of an institutionalized regime of systematic oppression and domination by one racial group over another, with the intention to maintain that system.” AI adds, “A regime of oppression and domination can best be understood as the systematic, prolonged and cruel discriminatory treatment by one racial group of members of another with the intention to control the second racial group.”

Amnesty notes that the Israeli government’s policies aim at empowering Jews and denying basic rights to Palestinians. After the Israeli military seized the Palestinian West Bank and Gaza in 1967, this was the policy pursued by military governors: “Today, all territories controlled by Israel continue to be administered
with the purpose of benefiting Jewish Israelis to the detriment of Palestinians, while Palestinian refugees
continue to be excluded.”

The report observes that in Israeli law, Jews are privileged. Anyone of Jewish heritage can immigrate into Israel. The families of Israelis of Palestinian heritage who live abroad do not have that right. “Arab-Israelis” are not allowed to serve in the Israeli army, save for the small Druze and (non-Arab) Circassian communities. AI points out that for the first 18 years of Israel’s existence, Israeli citizens of Palestinian heritage were kept under military rule. After the seizure of the Palestinian West Bank and Gaza in 1967, many of the techniques of control developed via martial law for “Arab Israelis” were deployed against the occupied Palestinians.

The use of the Israeli army is an essential tool of control against the Palestinians, who are frequently thrown in the brig and court-martialed even though they are civilians. AI writes,

” Since 1967, the Israeli authorities have arrested over 800,000 Palestinian men, women and children in the West Bank, including East Jerusalem, and Gaza Strip, bringing many of them before military courts that systematically fail to meet international standards of fair trial, and where the vast majority of cases end in conviction.”

800,000 arrested. There are only 5 million Occupied Palestinians, so on the order of 16 percent have been incarcerated at one time or another.

But you will say hundreds of thousands of Jews live in the Occupied West Bank, including in Jerusalem and its environs. You would be right, but they live under a different, non-military system. AI points out,

“By contrast, Jewish settlers have been exempted from the military orders governing Palestinians since the late 1970s after Israel extraterritorially extended its civil law over Israeli citizens residing in or travelling through the OPT. Jewish settlers in the occupied West Bank are therefore brought before Israeli civilian courts.”

AI covers other elements of Apartheid, including the statelessness of Palestinians in the Israeli- Occupied Territories, obstacles to family unification, and obstacles to travel both locally and abroad. None of these policies affect Israeli Jews. Then there is the matter of Palestinian property not really belonging to them, since the Israeli state can steal it from them at will. Amnesty says,

“In 1948, Jewish individuals and institutions owned around 6.5% of mandate Palestine, while Palestinians owned about 90% of the privately owned land there. Within just over 70 years the situation has been reversed.”

Israeli propaganda is so wide-ranging that it even wants to dispute this plain fact, which is summarized in the famous map:

The Amnesty case is devastating. The report has of course attracted the ire of the Israeli propaganda establishment and its backers in the US Israel lobbies. Those lobbies have so far managed to marginalize anyone who points out what is actually going on over there. They have somehow managed to keep Palestine news off American television. It is becoming harder and harder, however, for the propagandists to hide the elephant of Apartheid in the Israeli room, as US civil libertarians begin being more vocal and calling the Israeli treatment of Palestinians by its name.

It needs to be underlined that although Apartheid was the term used in the Dutch-derived Afrikaans language for systematic government segregation policies in twentieth-century South Africa through the early 1990s, using the term for Israel-Palestine does not imply that the Mideast situation is like South Africa’s in every respect. Rather, the crime of Apartheid, starting off from the South Africa example, has become a key part of international law.

The 2002 Rome Statute, which has 123 signatories among the nations of the world, and which established the International Criminal Court, contained a definition of Apartheid.

‘The crime of apartheid’ means inhumane acts . . . committed in the context of an institutionalized regime of systematic oppression and domination by one racial group over any other racial group or groups and committed with the intention of maintaining that regime…