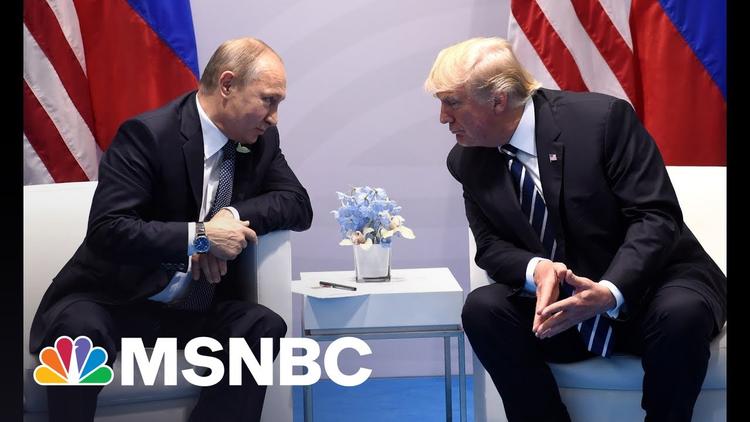 Ann Arbor (Informed Comment) – Trump’s fawning admiration of Vladimir Putin is well known, but it has often been brushed off as a quirk. We should have known how dangerous Putin was when he praised Trump as “impressive.” Trump is impressive the way spoiled butter left out too long is, rancid and foul-smelling.

Now Trump is calling Putin “smart” and “savvy” and a “genius” for his brutal invasion of Ukraine.

Putin since his invasion and annexation of Crimea in 2014 has probably been correctly characterized as an adversary or rival of the United States. But now, with his invasion of Ukraine and with President Biden sending thousands of troops to Germany, Bulgaria and other countries near Ukraine, I don’t think it is a stretch to describe Putin as an enemy. Technically an enemy attacks US military forces, but nuclear powers cannot risk that sort of direct conflict, and can clearly come into a relationship of enmity without actual military violence.

Article III, Section 3, Clause 1 of the Constitution says, “Treason against the United States, shall consist only in levying War against them, or in adhering to their Enemies, giving them Aid and Comfort. No Person shall be convicted of Treason unless on the testimony of two Witnesses to the same overt Act, or on Confession in open Court.”

There have for years been at least credible allegations that Trump launders money for Russia. If that is true, and he goes on doing it at a time when President Biden is freezing Russian assets in the United States, that could be interpreted as giving aid and comfort to the enemy. It could, that is, become more than merely a financial crime.

But even if Putin’s Russia is not formally an enemy of the US, and even if Trump is not formally guilty of giving aid and comfort to the enemy, Trump is certainly in smelly territory, and Americans have in the past been prosecuted for suspected sympathies with Moscow. I think that was an affront to the constitution and don’t want to see that sort of tool used even against Trump and his fascists.

But I am underlining the hypocrisy of the Republican Party, which led the charge against the Seattle Seven on largely inaccurate grounds but now is making excuses for Trump for doing and saying things that are much worse. Trump, unlike the small US Communist Party of the 1940s and 1950s, really has tried to overthrow the government of the United States and really is sycophantic toward Moscow.