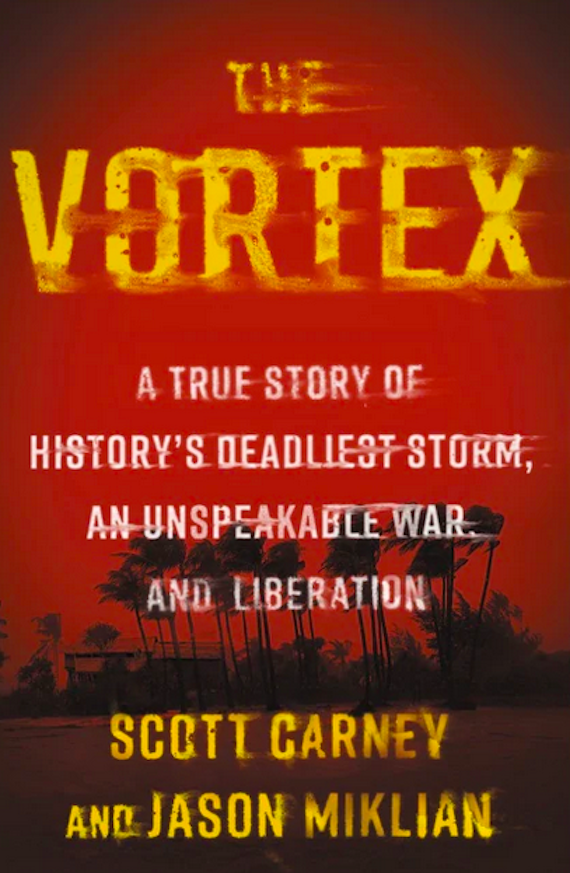 Oslo (Special to Informed Comment) – In November 1970 the Great Bhola Cyclone smashed into the southern coast of what is now Bangladesh, killing 500,000 people. It wasn’t just the deadliest storm in human history — it knocked over the first domino in a political chain reaction that brought the world to the brink of nuclear armageddon. This cataclysmic storm flipped an election, then sparked a genocide, started a civil war and brought the USA and USSR to within hours of launching nuclear weapons at each other.

But this isn’t just the story of a close call from long ago. A future framed by a warming globe means that the real danger of climate change doesn’t represent just fires and storms, but an increased risk of major international conflict with each new landfall.

The good news? We have the tools to stop these dominos from falling, if we just know which warning signs to spot.

The Great Bhola Cyclone made landfall as Pakistan was suffering through extensive socio-political instability. Pakistan was literally a divided country then, with its capital and power center of Islamabad in the west, and the more populous Bengali speaking region to the east. India lay between East and West Pakistan.

General Agha Mohammed Yahya Khan was Pakistan’s president then. Yahya’s feeble, uncaring aid effort after the cyclone magnified the death toll and convinced Bengalis that he would never see them as equals. Just three weeks later, Pakistan held its first ever democratic elections. A Bengali majority voted Yahya out, but he refused to leave office. As unrest grew, Yahya ordered a brutal military crackdown to kill tens of thousands of protestors. He believed that if he could just kill three million Bengalis, “the rest would eat out of our hands.” So he did just that, launching a genocide against the Bengali people – his own Pakistani citizens.

Yahya’s viciousness pulled in the world’s pre-eminent military powers. Overwhelmed by refugees, India looked to the Soviet Union for help. The USSR supplied arms to a resistance movement. Pakistan was long-time friends with the USA, so then-President Richard Nixon not only helped Yahya cover up evidence of the genocide, but sent illegally smuggled weapons too.

A True Story of History’s Deadliest Storm, an Unspeakable War, and Liberation. By Scott Carney and Jason Miklian. Click Here for publisher site. or at Nikola’s Books or at Barnes & Noble or at Amazon.com

As the massacre morphed into a civil war, the Bengali resistance, trained by India and armed by the USSR, began to make inroads. Terrified that East Pakistan would be only the first country to fall to the Soviets in South Asia, Nixon dispatched the USS Enterprise and its dozens of nuclear weapons to the Bay of Bengal as a deterrent. The Soviets matched the Enterprise with their own flotilla of nuclear-equipped submarines.

As the competing flotillas neared each other, Nixon’s Secretary of State Henry Kissinger urged a “final showdown” – a first strike of nuclear weapons to win the war for Pakistan. At the same time, the Soviet subb were ordered to make sure that the Americans got no closer to land – and to use their own nukes if they dared try. The world averted nuclear armageddon – possibly by mere hours – only because East Pakistan’s capital Dhaka fell on that very day. The Bengali resistance, with the help of India, won the war. About one year after Bhola made landfall, Bangladesh was born.

Hundred-year storms like the Great Bhola Cyclone might feel like once-in-a lifetime anomalies, but climate change is accelerating their frequency into once a decade or, in the worst projections, annual events. They crash into fragile political systems just as surely as they do coastlines. They trigger chain reactions that build into ever greater catastrophes as one dangerous situation collides with another. Dozens of countries like Bangladesh are at high risk of armed conflict, and storms like the one that hit East Pakistan in 1970 can be the spark that sends a country over the edge.

Of course, climate change didn’t cause the Great Bhola Cyclone. Rather, it’s a harbinger of what climate change will bring in the future. The problem isn’t just that each specific storm is a roll of the dice for societal and political destruction, but that due to climate change the dice are being rolled more often, in more places, and generating more powerful storms, each and every year.

And megastorms won’t be the only thing that drives climate conflict. Droughts, floods, desertification, and other shocks to fragile environments can all trigger political and economic upheavals. For example, in 2018 Central American farmers were pushed off land that was no longer arable, and were unable to settle in violent local cities. They joined what then-president Donald Trump called the “migrant caravan”: 4,000 displaced people seeking an opportunity simply to live productive lives again. Experts estimate that two million climate refugees from Central America alone will attempt to enter the United States by 2040. That’s two new climate caravans every month for the next two decades.

The stakes are higher—and more immediate—than even most climate-change advocates realize. Our global climate future means not just flooded beach houses in twenty years and more expensive groceries next decade, but an increasing likelihood of selective genocide and even global international war. Analysis from peace research scholars shows that disasters are increasingly used to leverage political aims, using the same blueprint that Yahya Khan did after the Great Bhola Cyclone.

The path is familiar: A disaster strikes a country suffering from political tension. Leaders of that country, whether out of malice or indifference (or both), give a half-hearted disaster response. It inflames tensions along pre-existing societal dividing lines. The ruling party blames the aggrieved for the tensions to justify further suppression. Then, war erupts. To wit, politicians used the 2017 drought in Sudan, the 2004 Sri Lanka tsunami, and the 2016–2020 drought-flood cycles in Afghanistan and Somalia to justify wars or increase their intensity. And more will come.

But the future is not predetermined. In issues of war and climate, holding politicians to account at critical junctures can mean the difference between heartwarming tales of humanity coming together or a genocide. It’s essential to penetrate the noise of information overflow on topics as wide-ranging and combative as the relationship between natural disasters and social conflict.

Jason Miklian is a Senior Researcher in business, peacebuilding and sustainable develpment at the Centre for Development and the Environment (University of Oslo, Norway). Miklian has published two books and 75 academic articles in the fields of business, peace and crisis, winning several awards for his publications. Miklian holds a PhD in Development Studies from NMBU (Norway). His most recent book, co-authored with Scott Carney, is The Vortex A True Story of History's Deadliest Storm, an Unspeakable War, and Liberation .