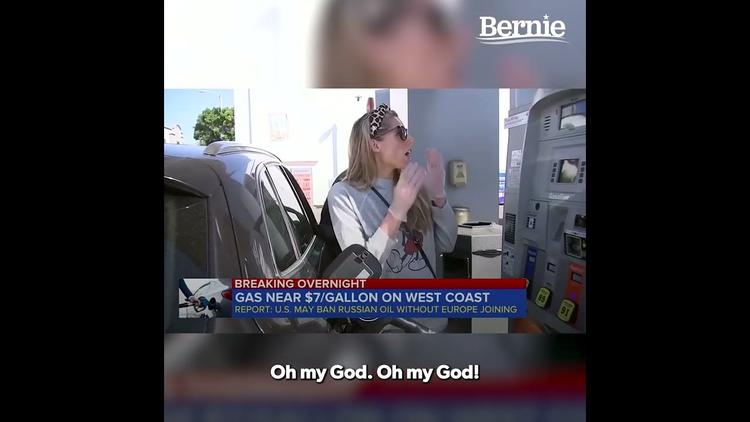 Whitehouse said at his site, “We’ve seen this script before, and we cannot allow the fossil fuel industry to once again collect a massive windfall by taking advantage of an international crisis. I propose sending Big Oil’s big windfall back to the hardworking people who paid for it at the gas pump.”

Senator Jeff Merkley (D-OR) makes clear some of how this tax would work to produce a rebate check to consumers: ““We have to cut off the Russian oil sales that are funding Putin’s war crimes in Ukraine. Americans want to put pressure on Putin, but they need help with high gas prices. So let’s tax oil companies’ war profiteering and send gasoline rebate checks to Americans.” Sen. Elizabeth Warren (D-MA) agreed: “We need to curb profiteering by Big Oil and provide relief to Americans at the gas pump — that starts with ensuring these corporations pay a price when they price gouge, and using the revenue to help American families.”

The senators have their eyes on the future, as well, and seem to want to use the present crisis to leverage a faster transition to renewables. Whitehouse said, “Over the longer term, speeding up the transition to renewables will lower energy costs, insulate consumers from price spikes, and reduce Western nations’ dependence on foreign despots and greedy fossil fuel companies.”

Whitehouse is right that the real answer to both the oil price crisis and to global heating is to move to electric transport, fueled by wind and solar, as soon as possible.

“We need to hold large oil and gas companies accountable and prevent them from using this moment to exploit American consumers. We also urgently need to invest in America’s clean energy economy to cut costs for families and strengthen our energy independence, which we can do by passing the extension and expansion of the clean energy tax credits included in the Finance Committee’s budget package.”

Other progressives backing the bill weighed in. Sen. Bernie Sanders (I-VT) observed, “We can no longer allow big oil companies, huge corporations and the billionaire class to use Putin’s murderous invasion of Ukraine and the ongoing pandemic as an excuse to price gouge consumers. It is time to enact a windfall profits tax.”

Sanders clearly sees that spike in gasoline prices as very similar to the spike in consumer commodities across the board, in that he sees price inflation as driven in part by corporate profiteering. Corporations that might fear raising prices lest there be a consumer backlash see crises as a moment where they won’t take the blame but rather external factors– even where they are in fact to blame.