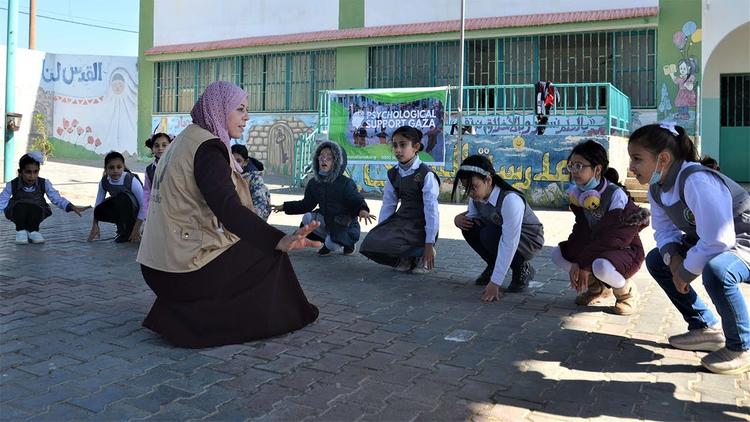 ( Jordan Times ) – More than two million refugees have fled Ukraine since Russia invaded that country. The majority have been women and children since men between 18-60 are not allowed to leave and are conscripted into the armed forces. Most refugees have fled to Poland, Moldova, Slovakia, Romania and Hungary where Ukrainians, but not Arabs, Asians and Africans, have been warmly welcomed. The office of the UN High Commissioner for Refugees (UNHCR) has warned that the outflow of refugees could swell to five million.

At the end of the first week of warfare, when the number of refugees was estimated to be ONE million, UNHCR chief Filippo Grandi said half were children. This percentage is likely to be maintained as long as the outward flow continues.

Ukrainian children, experts argue, are particularly vulnerable to psychological distress and long-term mental health problems due to the trauma of sheltering from bombs in underground train stations and basements and being torn from their fathers and other family members, friends and schools, and home environment. Children may also be affected by long, cold and perilous journeys to borders where they have to wait in line for hours before being allowed to cross into a safe country. They could be distressed by uncertainty over where they will be accommodated and fed when they arrive in a strange country and worry over where they will eventually find refuge.

The situation is particularly difficult and, even, alarming for children who travelled on their own, leaving behind parents whose presence could provide a measure of stability and comfort.

The Western media cites mental health experts on the impacts of past war situations on children without speculating how the Ukraine war may affect the young. Children can be shaken, depressed, withdrawn, undemanding, liable to cry without cause and wet their beds. How children handle warfare depends on parental and other support systems. These change when families become refugees and could deepen trauma and alienation.

The refugee children of Ukraine are fortunate because their mental health is already being discussed and, in some cases, addressed even though the Russian war on Ukraine is 15 days old.

By contrast, the children of Gaza are forgotten victims of Israel’s 15-year war on the Palestinian coastal strip. Sixty-four per cent of these children come from refugee stock and the majority depend on the UN agency looking after refugees for the necessities of life. Gaza’s children cannot flee from the strip and find sanctuary in a safe country. They are trapped by Israel’s siege and blockade. Seriously ill children cannot get Israeli permits to travel to West Bank or Israeli hospitals for treatment not available in Gaza. Many youths who gain admission to foreign universities cannot leave Gaza in order to secure degrees and claim a future outside the strip’s narrow confines.

Israeli drones fly overhead constantly and, occasionally, strike targets claimed to be military sites. When, between 2018-2020, Palestinian youths and minor children resisted the Israeli occupation by protesting at the Israel fence which surrounds the Gaza strip, Israeli troops fired tear gas, rubber bullets, and live rounds at them. Between 2018-2020 214 Palestinians, 46 of them children, were killed and 36,100 Palestinians were injured, including 8,800 children. Resistance of any type is branded “terrorism” by Israel and its friends.

Every few years Palestinian children are subjected to full-scale Israeli attacks which can last a week or weeks. Unlike Ukrainian children, Gaza’s children do not have underground train stations and tunnels and bunkers where they can shelter from bombs, bullets and shells. Israel’s current practice is to warn Palestinians to leave homes and other buildings about to be levelled.

While this saves lives where warnings are given, families are rendered homeless and without most of their possessions. Children search rubble for teddy bears, toys and schoolbooks and bags. Children who survive destroyed unoccupied households help dig survivors and bodies of unwarned famililes from the ruins.

Gaza’s Community Mental Health Programme, founded in 1990 by the late Eyad Al Sarraj is the leading Palestinian non-governmental organisation providing counselling and other help to men, women and children suffering from war and privation. The latter caused, at least in part, by Israel’s blockade. Research has shown Palestinian children develop feelings of fear, anger, hostility, resentment and frustration which can turn to violence in schools. In response, the programme has carried out programmes in schools to train teachers how to deal with affected children and encourage children to resolve differences peacefully. Summer camps and recreational trips are also organised for children.

During a trip to Gaza with a BBC television correspondent some years ago, she and I interviewed the deputy director of the Mental Health Programme. Since the weather was clear although the wind was gusty, we did the interview on the beach where children were playing football. They gathered round and aggressively asked who we were and what we were doing. They exemplified the trauma that Gaza’s children face on a daily basis.

Before his death from cancer in 2013, I used to call on Eyad whenever I visited Gaza. Following Israel’s 2008-09 onslaught on Gaza, I found him at home with his six-year-old son, Ali, who sat firmly on Eyad’s lap. He had kept Ali by his side throughout the Israeli attack. Eyed told me that as a result of that campaign, 99 per cent of Gazans suffered from post-traumatic stress disorder (PTSD). When I checked with people I met, they agreed. People react in different ways to PTSD. A foreign resident told me his son had nightmares and wet his bed while a UN official spoke in a rapid stream of words during an interview, signalling that he was suffering from PTSD.

This heightened bout of PTSD was piled on top of years of traumatic stress caused by Israel’s siege and constant malignant presence on the borders, in the sea, and in the sky over Gaza.

While the world focuses on the tragic and terrible plight of Ukraine’s children, the endless trauma of Gaza’s children should not be ignored.

Reprinted with author’s permission from the Jordan Times