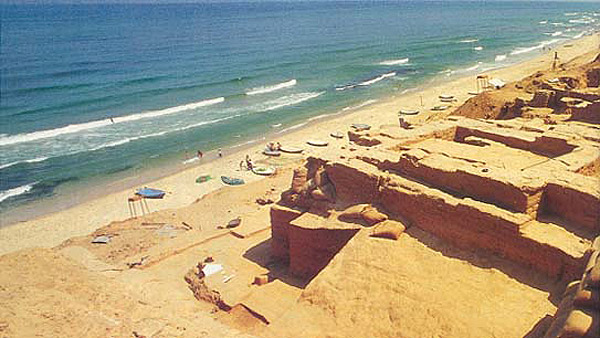 Ann Arbor (Informed Comment) – The Palestinian Gaza Strip doesn’t stay on the world’s mind the way some besieged cities in Ukraine do right now, but it is also surrounded, besieged, and blockaded by Israeli forces. This blockade is illegal in international law, since Israel is recognized as the Occupying authority over Gaza, which it seized in 1967 after plotting to do so for years.

Gaza through history has been an economic crossroads and a center of trade and culture. A new report by the open-source archeological site Forensic Architecture shows that indiscriminate Israeli bombing and unprofessional Israeli archeological techniques have helped destroy some of Gaza’s rich history.

Take the city of Anthedon. UNESCO observes, “The city was inhabited from 800 BC to 1100 AD, and witnessed a series of different cultures: Neo-Assyrian, Babylonian, Persian, Greek, Roman, Byzantine and early Islamic rules (Umayyad, Abbasid, Tulunid and Fatimid).” Gaza and its port of Anthedon, by the way, were never part of the ancient kingdoms of Israel or Judah.

The city became part of the Hellenistic world after Alexander the Great’s (d. 323 BC) conquests and Greek language and culture flourished there for centuries.

The authors at Forensic Architecture write, “Inland, archaeologists unearthed extraordinary findings from the Greco-Roman period, including the Roman city wall and villas, and Hellenistic-era houses whose painted decorations illustrate influences from across the Mediterranean (fig. 5). These finds formed part of the city of Anthedon, one of the most important Hellenistic-era ports on the Mediterranean.”

“In May 2021, Israeli occupation forces conducted yet another massive bombardment of the Gaza Strip, killing more than 250 Palestinians*, including 66 children. 7 The bombing toppled high-rise buildings, destroyed major roads and commercial areas, and hit essential infrastructure, including hospitals and schools.

The bombs also impacted important cultural and archaeological sites. Colleagues in Gaza told us about bombs which have fallen within the known perimeter of this archaeological site [of Anthedon], inland and along the coastline. We found evidence of bomb craters (fig. 8) directly above buried archaeological remnants; even as international law, under certain conditions, dictates that such attacks against historic monuments may amount to war crimes.”

The Romans took Gaza in 63 BC and built its namesake into a Roman city. They also developed Anthedon.

Gaza’s ancient Palestinians thus became Roman subjects. With the Edict of Caracalla in 212, the men became full citizens of the empire, and their women came to have the same rights as Roman women.

It is ironic that the ancient Palestinians of Gaza gained citizenship in the Roman Empire, since they have been deprived of citizenship rights in a state by the Israelis and are now stateless.

The local chief god of Gaza Palestinians, Marna, was identified with Jupiter or (since in the eastern Roman Empire Greek was favored) Zeus “of the rains.” Here he is in his aspect of Zeus: 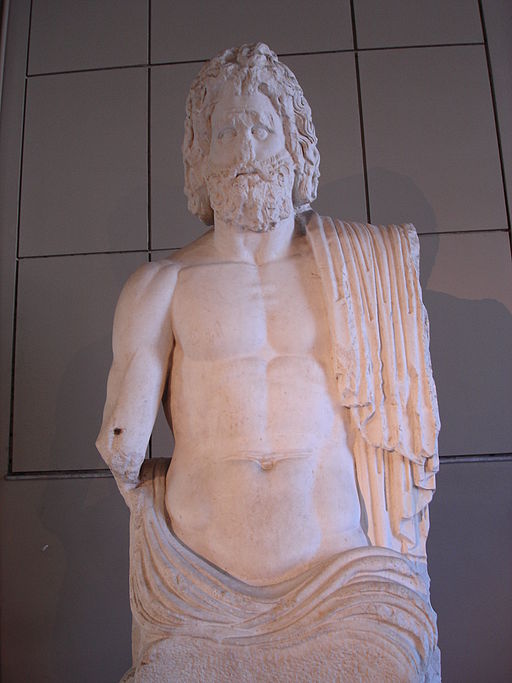 This is the kind of archeological treasure that is being reduced to rubble when Israel indiscriminately bombs the Gaza Strip periodically, angry that it has not been able to subdue or expel its people. Of course the lives lost in these airstrikes are more precious, but life is given meaning by culture, and damage to history and culture (what I have called “Cliocide”) is also a detraction from life.

Then especially in the 300s, the Palestinians of Gaza began converting en masse to Roman Christianity. By the late 400s and early 500s they were producing major Christian theologians.

Classicist Jill Kraye described the Christian Aeneas of Gaza (d. c. 518), who studied with pagan Neoplatonists in Alexandria, as “a rhetorician and sharp-witted satirist, well versed in Homer, Herodotus, and Xenophon, as well as in Plato and the Neoplatonists,” noting that he “later returned to his native Gaza.”

Of Procopius of Gaza (465-528) this site says, “He is a valuable witness to the Apostolic Tradition since his commentaries are filled with extensive quotes from earlier Fathers of the Church including Origen, Basil the Great, and Cyril of Alexandria.”

Zacharias Scholasticus (died c. 540), another Gazan Palestinian who studied in Alexandria, attempted to refute Plotinus’ account of creation in favor of a more biblical approach, though using the language of Greek Neoplatonism.

This triad of Gaza philosopher-theologians were also known for attempting to purify the Greek rhetoric of their day.

Dorotheus of Gaza (505 – 565), a monk, wrote an important and widely translated book in Greek about asceticism, “Directions on Spiritual Training,” and founded a monastery near Gaza City. Its remains, too, are endangered by Israeli violence and by nationalist approaches to archeology (not shared by any means by all Israeli archeologists).

The Muslim sources say that from the middle of the 500s Abdullah b. `Abd al-Muttalib used to trade up to Gaza from Mecca. He is said to have died of fever on returning from such a journey to Gaza around 570, when his wife was pregnant with their son, who would be named Muhammad and would found a world religion.

When Muslim rule replaced that of the Romans in Gaza in the late 630s, the area’s ports became Muslim assets and the new rulers benefited from its trade. Over many centuries the Christians of Gaza (and maybe there were still some pagans in the 600s) gradually embraced the new religion of Islam. There is no evidence of forced conversion, and many European historians have not sufficiently reckoned with the attractiveness of Islam as a religion.

In 1948 when the Jewish immigrant community in British Palestine seized the lands that became the state of Israel, they ethnically cleansed the Palestinians of the south, forcing them into Gaza camps as refugees, where their descendants make up 70% of the population and where they are still besieged by the Israelis.

And now the Israeli state has put the two million people of Gaza in the world’s largest open-air prison, and periodically they bomb the bejesus out of them, as well as out of their precious history.