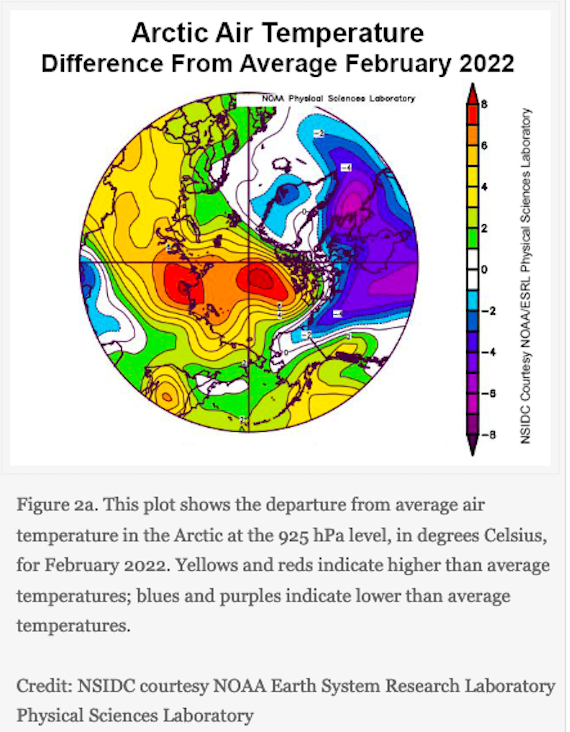 Ann Arbor (Informed Comment) – While it made headlines because it is freakish, that parts of Antarctica are 70 degrees F. warmer than usual may just be a fluke. Climate is a trend line you can see over 50 years of changes. Weather is what happens for a day or a week.

The more alarming number is one that is slightly lower, which is 50 degrees F. warmer than usual, and it concerns the Arctic, the north pole, not the south. You see the red areas of the map below? They are seriously not supposed to be there, especially at a time when the Arctic is still plunged into the long winter night:

The Arctic is heating up more than twice as fast as the rest of the earth, according to the National Oceanic and Atmospheric Administration (NOAA).

Not only are parts of the Arctic hotter than normal but the extent of sea ice appears again to be anemic this year, the 14th worst performance in the satellite record (since 1979). This, according to the National Snow and Ice Data Center (NSIDC). If we go on as we are now, burning coal, methane gas and petroleum and emitting greenhouse gases, I fear that center will have to be closed up in the future for lack of . . . snow and ice.

The extent of sea ice in the Arctic was 226,000 square miles less than the 1981-2010 average, and in February the extent was in the lowest ten percent. This graph from NSIDC shows how the ice extent in the North Pole has been declining consistently by 2.8 percent a decade since 1979. 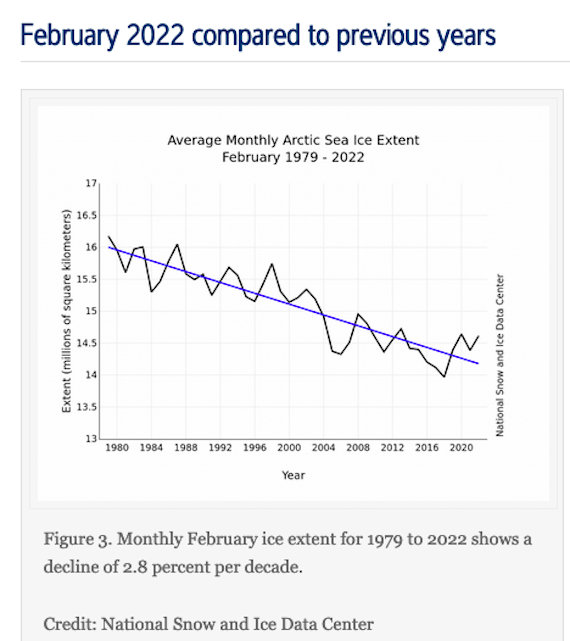 Since 1979, if you are looking at the February ice extent, there has been a loss of 703,000 square miles of ice. That’s nearly three times the size of Texas.

I can’t tell you how weird and alarming this rate of ice loss in one of the purportedly coldest places on earth is. People call the Arctic “earth’s air conditioner.” But it is increasingly just earth’s wet spot. I mean, if human beings were rational and educated to be critical thinkers, this graph would make us swear off fossil fuels yesterday.

Where the ice is on land, as in Greenland, its shrinking means it is melting into the ocean, which will rise as a result and submerge major coastal cities in the US and around the world.

NISDC scientists say that soon, it will rain more often in the Arctic than it will snow, and that this situation will come about much more quickly than they had expected.

We are beginning to see some feedback loops ratcheting us toward global heating and ice melt. The extra carbon dioxide in the atmosphere has already heated up the earth nearly two degrees F. (1.1C), which has plunged the US Southwest into a megadrought and contributed to gargantuan forest fires. Those massive fires are producing brown carbon, which is part of what is heating up the Arctic, especially in the summer.

You never want to see a new, massive feedback loop like that in nature. It will quickly take us places we don’t want to go.