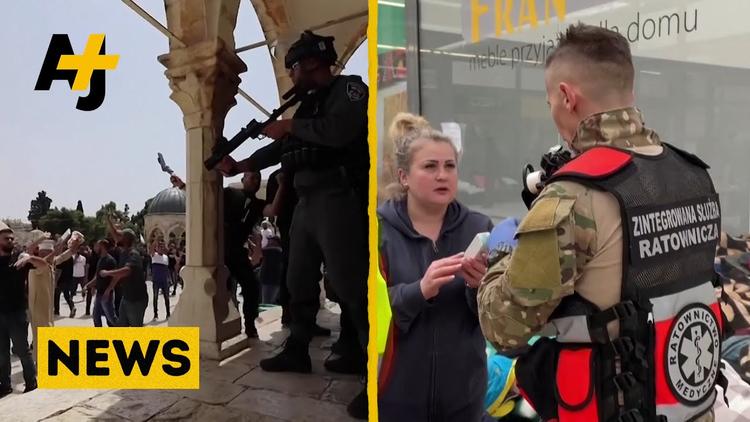 ( Middle East Monitor )- Once again, Israel feels entitled to play the humanitarian card, with only Palestinians pointing out its selectivity when it comes to opening its doors to refugees. In February, The Jerusalem Post reported that 10,000 Jewish Ukrainian refugees would be entering Israel. The move was confirmed by Israel’s Ministry of Immigration, which stated that: “The Ministry of Immigration and Absorption is prepared for the emergency immigration of Ukrainian Jews, and in view of the escalation in Ukraine, the ministry, headed by Minister Tamano-Shata, is preparing all sectors to assist and absorb any Jew seeking to immigrate to Israel.”

“We call on the Jews of Ukraine to immigrate to Israel – your home,” the ministry emphasised.

Not only has Israel stolen land from the Palestinian people through the Nakba’s ethnic cleansing, ongoing colonial expansion and apartheid policies, it is now inviting Ukrainian Jews to participate in its colonial violence against the Palestinian people. Israel’s aim is not humanitarianism, it is to maintain a demographic majority, and the current wave of refugees is being exploited by the Israeli government, which has been clear enough to differentiate between Ukrainian refugees and Jewish Ukrainian refugees. Only the latter are welcome in Israel with full rights. As Interior Minister Ayelet Shaked announced this week, 25,000 non-Jewish Ukrainians will be allowed to stay in Israel as refugees, thus distinguishing between Ukrainians, while still impeding upon the Palestinians’ right to return to their land.

The Jewish Agency’s acting chairman Yaakov Hagoel called the Ukrainian Jews’ arrival: “An important contribution to the development of the State of Israel, which today welcomes you with open arms and brotherly love.” A political admission that is completely void of the humanitarian veneer that fails to shroud Israel’s colonising intent. This means that Jewish Ukrainian refugees choosing Israel must be acknowledged as settlers – active participants in the Zionist colonial project with rights that exceed those of the Palestinians living under colonial apartheid.

Meanwhile, the international community keeps silent about decades of hypocrisy over the Palestinian right of return – purposely inherently flawed to prevent Palestinians from ever claiming their place in historical Palestine.

Palestinians have been forced into perpetual refugee status by Israel and the United Nations (UN), which created the UN Relief and Works Agency for Palestine Refugees to cloister the forcibly displaced Palestinians into the planned humanitarian paradigm. While the world whips up a frenzy about Ukrainian refugees, Palestinians have been insisting upon their right to return to their land for decades, and the international community’s only response was to draw up a flawed non-binding resolution pretending to support that right, while upholding Israel’s colonial project to take precedence.

Given Israel’s involvement in the question of Ukrainian refugees and future Jewish Ukrainian settlers, the international community ought to have played a role in reminding Israel of its obligations and forcing it to comply. The Palestinians’ political right to return to their land is legitimate and should take precedence. The entire world has offered Ukrainian refuge, but Israel’s offer has nothing to do with humanitarian issues and everything to do with keeping Palestinians out.