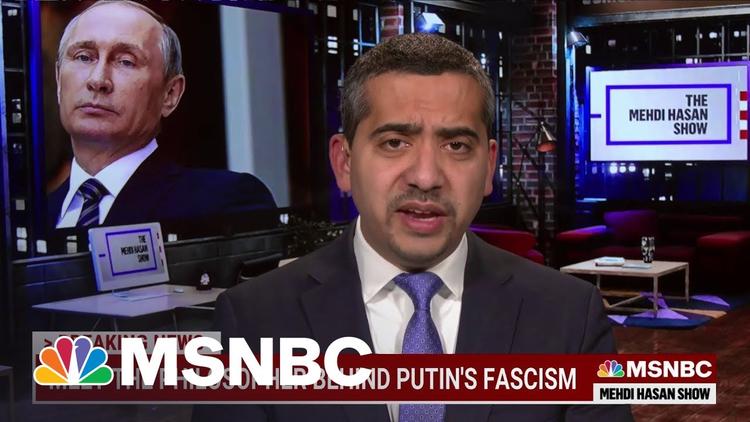 When Vladimir Putin unleashed an unprovoked invasion of Ukraine on Feb. 24, 2022, the Ukrainian media, public and policymakers almost unanimously began calling the Russian president and the state he leads “rashyst.” The term is a hybrid of a derogatory moniker for Russia – “rasha” – and “fascist.”

Ukrainians did so for two reasons. First, they were countering Putin’s absurd insistence that the Ukrainian authorities – including Ukraine’s Jewish president, Volodymyr Zelenskyy – were Nazis and that Ukraine needed to be “de-Nazified.” Since Ukraine’s tiny number of right-wing extremists are about as influential as the Proud Boys in the United States, what Putin really had in mind was Ukrainians with a distinct Ukrainian identity. De-Nazification thus meant de-Ukrainianization.

Second, Ukrainians were drawing attention to those features of Putin’s Russia that indicated that it was fascist and thus in need of “de-Nazification.” Putin’s Russia was aggressive, anti-democratic and enamored of Putin himself. Unsurprisingly, his Russia’s resemblance to the regimes built by Mussolini and Hitler had not gone unnoticed by Russian and Western analysts in the last decade or so.

Few policymakers, scholars and journalists listened, however, as the term fascism struck many as too vague, too political or too loaded to serve as an accurate description of any repressive regime. Having written about Putin’s Russia as quasi- or proto-fascist already in the mid-2000s, I know from personal experience that few took my claims seriously, often arguing tautologically that Putin had constructed a “Putinist” system.

But as a political scientist who studies Ukraine, Russia and the USSR empirically, theoretically and conceptually, I believe Putin’s brutal invasion of Ukraine suggests that a reconsideration of the term’s applicability to Russia is definitely in order.

But, first, a brief foray into the classification schemes that social scientists like to use, which most people find incomprehensible.

Classifications are essential for good social science, because they enable scholars to group political systems according to their shared features and to explore what makes them tick. Aristotle was one of the first to divide systems into those ruled by one, those ruled by a few and those ruled by many.

Contemporary scholars usually classify states as being democratic, authoritarian or totalitarian, with each category having a variety of subtypes. Democracies have parliaments, judiciaries, parties, political contestation, civil societies, freedom of speech and assembly, and elections.

Authoritarian states rest on the state bureaucracy, military and secret police; they usually circumscribe most of the features of democracies; and they typically are led by juntas, generals or politicians who avoid the limelight.

Totalitarian states abolish all the features of democracy, empower their bureaucracies, militaries and secret police to control all of public and private space, promote all-encompassing ideologies and always have a supreme leader.

Fascist states share all the features of authoritarianism, and they may also share the features of totalitarianism, but with two key differences. Fascist leaders have genuine charisma – that ephemeral quality that produces popular adulation – and they promote that charisma and the image that goes with it in personality cults. The people genuinely love fascist leaders, and the leaders in turn present themselves as embodiments of the state, the nation, the people.

The bare-bones definition of a fascist state is thus this: It is an authoritarian state ruled by a charismatic leader enjoying a personality cult.

Seen in this light, Franco’s Spain, Pinochet’s Chile and the Greece of the colonels were really just your average authoritarian states. In contrast, Mussolini’s Italy and Xi Jinping’s China are clearly fascist, as were Hitler’s Germany and Stalin’s USSR. Fascist states can thus be on the right and on the left.

Putin’s Russia also fits the bill. The political system is unquestionably authoritarian – some might say totalitarian.

Putin has completely dismantled all of Russia’s nascent democratic institutions. Elections are neither free nor fair. Putin’s party, United Russia, always wins, and oppositionists are routinely harassed or killed.

The media have been curbed; freedom of speech and assembly no longer exists; and draconian punishments are meted out for the slightest of criticisms of the regime.

A hypernationalist, imperialist and supremacist ideology that glorifies all things Russian and legitimates expansion as Russia’s right and duty has been both imposed on and willingly accepted by the population.

War is worshipped and justified by the state’s mendacious propaganda machine. As the brutal invasion of Ukraine shows, war is also practiced, especially if it is directed against a people whose very existence Putin regards as a threat to himself and to Russia.

Finally, secret police and military elites, together with a corrupt bureaucracy, form the core of the political system headed by the infallible Putin, who is the undisputed charismatic leader glorified as the embodiment of Russia. One of Putin’s minions once noted that “if there is no Putin, there is no Russia!” There’s a striking similarity with French King Louis XIV’s assertion, “L’état, c’est moi” – “The state is me” – and Hitler’s “One people, one empire, one Führer.”

Fascist states are unstable. Personality cults disintegrate with time, as leaders grow old. Today’s Putin, with his bloated face, is no match for the vigorous Putin of 20 years ago.

Fascist regimes are overcentralized, and the information that reaches the supreme leader is often sugarcoated. Putin’s disastrous decision to invade Ukraine may have been partly due to his lacking accurate information about the condition of the Ukrainian and Russian armies.

Finally, fascist states are prone to wars, because members of the secret police and generals, whose raison d’etre is violence, are overrepresented in the ruling elite. In addition, the ideology glorifies war and violence, and a militarist fervor helps to legitimate the supreme leader and reinforce his charisma.

Fascist states usually prosper at first; then, intoxicated by victory, they make mistakes and start losing. Putin won decisively in his wars in Chechnya and in Georgia, and he appears to be headed for defeat in Ukraine.

I believe Putin’s fascist Russia faces a serious risk of breakdown in the not-too-distant future. All that’s missing is a spark that will rile the people and elites and move them to take action. That could be an increase in fuel prices, the development that led to a citizen revolt in Kazakhstan earlier this year; a blatantly falsified election, such as the one that led to riots in autocratic Belarus in 2020; or thousands of body bags returning to Russia from the war in Ukraine.

[More than 150,000 readers get one of The Conversation’s informative newsletters. Join the list today.]