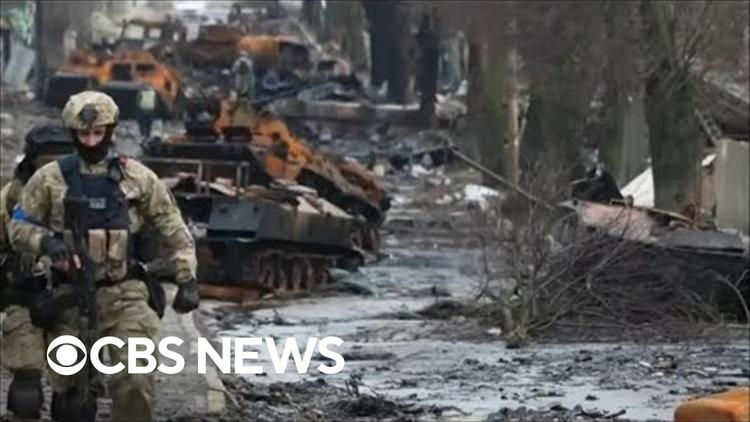 Ann Arbor (Informed Comment) – The Russian withdrawal from the small town of Bucha near the capital of Kyiv left behind a raft of murdered civilians in the streets and bombed buildings the way an ebbing tide leaves behind flotsam and driftwood after a violent tsunami.

The Russian government is attempting to escape blame for these atrocities by simply denying that they are the work of Russian troops, as though the Ukrainians shot themselves, repeatedly and in large numbers. Government spokesmen claim that the videos are deep fakes. It is an old war lie, rooted in a hope that the fog of war and your side’s blind nationalism will serve to perfume the stench of rotting corpses.

The NYT showed that satellite images demonstrated that some of the bodies had been lying in the streets while Russia occupied Bucha.

Poet Maya Angelou said, “When people show you who they are the first time believe them.” We should have expected this sort of behavior from the Putin regime. Vladimir Putin made his bones by flattening Grozny in the second Chechen War in the early zeroes. But his largest scale acts of wanton destruction were saved for Syria.

The Russian Federation went into Syria in the fall of 2015 to prop up the failing one-party state of dictator Bashar al-Assad, whose attempt to destroy the widespread rebellion against him, kicked off by youth revolts in 2011, had faltered.

Russian fighter jets gave air support to the diminished number of troops in the Syrian Arab Army, which had shrunk from 300,000 to 50,000 because of en masse desertions. These troops were aided by the Lebanese party-militia, Hezbollah and by Iraqi Shiite militias, coordinated by the Iranian Revolutionary Guards Corps.

If all Russia had done was to give some air support to the Syrian Army against Muslim fundamentalist rebels, that might be politically unpalatable to some, but it wouldn’t in itself be a crime.

The objectionable actions were the indiscriminate nature of Russian bombardment. The pilots hit schools, hospitals, kindergartens– it just didn’t seem to matter to them.

Aleppo in the north is Syria’s largest city, split into a nice, tony, large West Aleppo where the middle classes stayed loyal to al-Assad, and a much smaller, slummy East Aleppo, which became a rebel stronghold. Some of them were, frankly, proxies for al-Qaeda or at least al-Qaeda-adjacent. They used their base in East Aleppo to cut the whole city off from the main roads to the southern capital of Damascus, and they indiscriminately bombarded West Aleppo, which they hoped to conquer.

So, again, the Syrian government conquest of East Aleppo was warfare pure and simple, however bloody and tragic it may have been. The rebels were a legitimate target, and a good 40 percent of them were not much different from the Sunni Arab rebels the US spent years fighting in Iraq.

But the push on East Aleppo in September and October of 2016 put the civilians of this urban area in the cross hairs, and it would have needed careful military planning to avoid casualties.

Human Rights Watch quoted a report that found that “the bombing campaign killed more than 440 civilians, including more than 90 children. Airstrikes often appeared to be recklessly indiscriminate, deliberately targeted at least one medical facility, and included the use of indiscriminate weapons such as cluster munitions and incendiary weapons. Satellite imagery that Human Rights Watch analyzed shows more than 950 new distinct impact sites consistent with the detonation of large high explosive bombs across the area during the month.”

The Russians hit a major hospital, among other civilian structures.

HRW’s Ole Solegang observed, “Using that amount of firepower in an urban area with tens, if not hundreds, of thousands of civilians predictably killed hundreds of civilians. Those who ordered and carried out unlawful attacks should be tried for war crimes.”

The Russian denials were refuted extensively by The Atlantic Council’s report, “Breaking Aleppo,” which analyzed satellite photos and even the newsreel footage of Russia’s own television networks to document the atrocities.

My complaints about Russian war crimes in Syria led the fringe left to attack me for joining the alleged Washington attempt to blacken the image of Putin. (Why the Western left still thinks the capitalist plutocrat Putin needs defending by progressives beats me).

Donald Trump campaigned that fall of 2016 for president on a platform of letting Russia deal with Syria, since, he said, Putin seemed to have a handle on the situation. I still don’t know whether he is just galactically dumb and unprincipled or whether he is a Moscow asset.

Of course, Bucha is much worse than East Aleppo. The Russian troops in that Ukrainian town (and others, unfortunately) appear to have gone berserk and to have taken out their frustration on its civilians. It is one thing to be insufficiently careful about civilian lives during a military campaign, and admittedly the US could be accused of similar infractions in Iraq.

It is another to round up civilians on vague suspicions (one man was wearing army surplus khaki pants) and shoot them in the head, or to murder people shopping for groceries (one corpse lay sprawled atop his bag of precious potatoes). Some were killed during or after torture. This was indiscriminate killing as state terror, to cow the population or perhaps in some instances to take revenge for the failure of the initial Russian war aims. It was personal, in a way that the East Aleppo bombing was not.

But it is still the case that in Syria, Putin told us who he was.