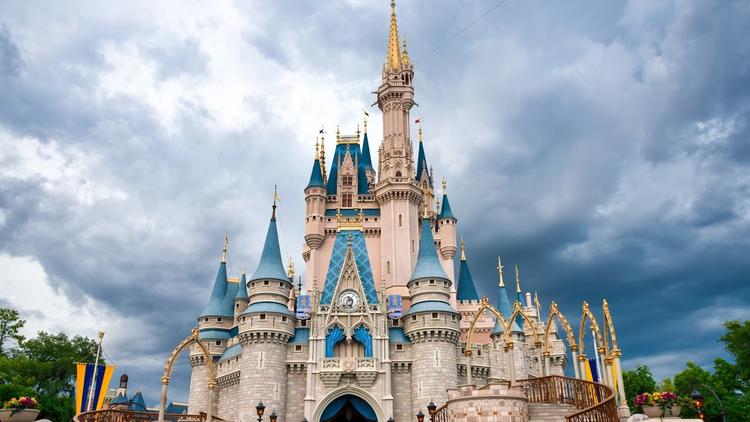 Ann Arbor (Informed Comment) – Gov. Ron DeSantis’s attack on the Disney Corporation may seem odd, coming from a pro-business governor in a state where Disney is one of the largest employers.

But DeSantis is pushing back at Disney on behalf of big capital, in a roundabout way. The entertainment corporations are problematic for the Republican Party, even though they fund GOP campaigns. Disney donated to DeSantis’s run for governor. This is because entertainment is wrought up with identity, and the Republican Party is now made up of identity warriors. As far back as the early 1990s, Dan Quayle ran against the Hollywood “cultural elite” and lambasted the sitcom character Murphy Brown, played by Candice Bergen, for a story line in which she decides to have a child as a single mother when her fictional husband, a political radical named Jake Lowenstein, refused to settle down into a domestic role. Quayle saw this fictional decision as a slam at male privilege.

The phrase “cultural elite” was an early 1990s code word for antisemitism. In this instance it referred to the husband-wife team of Diane English and Joel Shukovsky, the force behind “Murphy Brown.” Quayle was heavily implying that WASP, white Evangelical manhood was being eroded by Hollywood Jews who were weak and were surrendering to feminism.

So the white identity warriors are not new in the Republican Party. But their narrative has taken new twists and turns as substantial elements of the party have become entwined with the QAnon cult.

It is true that the purpose of the Republican Party is to represent the 33 million persons who constitute the richest 10% of Americans, who own 70% of the country’s wealth. The party is an even more fierce partisan of a smaller group, the top 1% — 3.3 million Americans who own $36.2 trillion of the nation’s wealth, more than the middle 60 percent of American households.

The basic problem for the top ten percent is that they don’t have the votes to win elections, and if they don’t win elections then they cannot continue to craft laws that aid in the wealth accumulation of the top 10% (and especially the top 1% or even 0.1%).

For instance, the super-wealthy really wanted the Republicans to cut their taxes in 2017, since that was the purpose for which they bankrolled the GOP into the majority. According to the Center for Public Integrity, at a 2017 confab of Republicans and their rich patrons hosted by the billionaire Koch brothers, the wealthy voiced their frustration that the Republicans had not come through for them.

“One wealthy attendee, Texan Doug Deason, who oversees his family’s $1.5 billion fortune, was blunt. He declared that his “Dallas piggy bank” was closed for 2017 until Congress achieved both Obamacare repeal and tax reform. “All we were saying was that we were not going to support legislators anymore until they did what they promised to do when they were elected,” Deason told the Center.”

When you see analyses that the 2017 tax cut affected all social classes, be aware that you are being gaslit. A small tax benefit to middle class people can’t be compared to the huge windfall the law bestowed on the billionaire class. Just notionally– these are not real figures — if someone makes $70,000 a year and pays 24% instead of 26% that person saves $1,400 (though the person will also receive fewer government services). If someone pays taxes on $20,000,000 a year, a 2% decrease in taxes is $400,000. And the person can use that $400,000 to lobby congress to lower taxes on the wealthy even more. It is a perpetual motion machine.

But you have to have a majority in Congress to get this result, and nobody is going to vote for a platform of giving some rich person an extra half-million dollars a year and cutting everyone else’s government services, so that highways have potholes and airports are falling apart.

So how do you get 41% of the people to join in with the very wealthy and support their agenda?

In the old days, the Republicans attempted to put together a coalition of property-holders– small business-people and even homeowners, against the workers and the poor. The beauty of Communism for them in the 1950s was that you could just accuse Democrats and unions of being Communists, and the homeowners would vote for you in fear that the Bolsheviks might attach their property the way they did the mansion of Dr. Zhivago in the movie.

But then Russia became a white, Christian plutocracy, and it was hard to get a rise out of people on the Communism issue. Then al-Qaeda and Muslim terrorism were appealed to, but that pretext seems to have worn thin since so many Muslim Americans are physicians, businessmen and scientists and pillars of the community.

The answer the contemporary Republican Party has hit upon is to stir anxiety among people who think of themselves as white, straight and Christian. It is no longer enough to make them afraid for themselves or their property.

That is why elements of the party accused Hillary Clinton in 2016 of running a pedophilia ring out of a pizza parlor in Washington D.C. (which eventually got the pizza parlor shot up). That is why the Republican senators hinted around as heavily as they could that Ketanji Brown Jackson had given light sentences to pedophiles.

This tactic is so bizarre on the surface that the corporate news outlets have difficulty taking it seriously, so that they often don’t see clearly what is going on. As the wealth inequality in the US skyrockets, most voters have less and less in common with the top 1%, making the job of the GOP as political brokers for the latter ever harder. So Republicans are becoming ever more hysterical and phantasmagorical in the threats they try to conjure up.

Preventing teachers from telling white, straight, Christian children that their ancestors enslaved Black people, and preventing teachers from mentioning that some people are gay, are also ploys in this Child Identity McCarthyism. DeSantis is one of the ringleaders in these efforts, having been a longtime white supremacist who ran a racist Facebook group before conning Floridians into electing him.

Most of the corporate world doesn’t care about how the Republicans get into power, and even if they find the politicians’ antics distasteful, they just want the tax cuts and corporate welfare Congress can bestow on them.

But the entertainment industry is different. Its CEOs have to care about identity because they market to identities. And they cannot afford to have a lockstep policy of playing only to white straight Christians, since they would lose half or more of their profits. They want gays, atheists and agnostics, and people of color to consume their shows and movies.

Disney at first tried to pretend it made steel and to avoid coming out against DeSantis’s “Don’t say gay” law aimed at regimenting teachers. But the entertainment industry’s employees are diverse, and the employees let the corporate leaders know in no uncertain terms that this ostrich policy was unacceptable. Disney can’t afford the bad publicity of strikes and demonstrations by its own employees.

So Disney defied the Republican Politburo, and Chairman DeSantis responded by trying to punish the company by taking away its administrative autonomy. This step may backfire on DeSantis, since he seems to have taken on $1 billion in debt for infrastructure in the area of Disney World. Or rather, he has saddled Florida’s taxpayers with it.

The entire struggle, however, points to how a dangerous fascism has increasingly taken hold of the American Republican Party, forming an existential threat to our democracy.