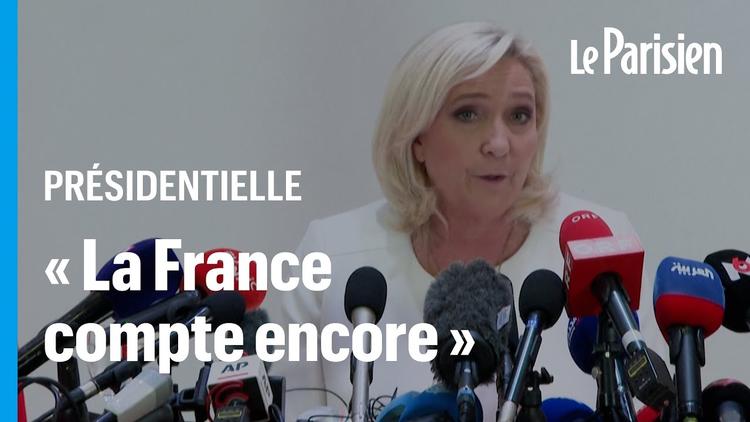 Days before the second round of the French presidential elections, far-right presidential candidate Marine Le Pen (Rassemblement National, RN) spelled out some of her foreign policy priorities: limit military support to Ukraine and steer clear from voting new sanctions against Russia; leave NATO’s integrated command; and relaunch a “strategic rapprochement between NATO and Russia” as soon as peace between Moscow and Kiev can be secured.

Amid the war in Ukraine, Le Pen has had to soften her pro-Russian rhetoric to stay closer to the French public opinion. However, she continues to advance a foreign policy at odds with most French – and European – politics.

A relationship dating back to Jean-Marie Le Pen

The reasons for this pro-Russian stance are manifold.

The links of the Rassemblement National (known until 2018 as the Front National, FN) with Russia are long-standing. As early as 1968, Le Pen’s father and president of the party, Jean-Marie Le Pen, welcomed the Soviet Russian nationalist and antisemitic painter Ilya Glazunov, who had come to Paris as part of a Soviet delegation in the hope of painting a portrait of General Charles de Gaulle. After the French president declined the offer, Glazunov ended up drawing a portrait of Le Pen himself. The episode would herald the party’s attempts to present itself as Charles de Gaulle’s natural heir in a bid to connect with Russia.

At an ideological level, the French Catholic, monarchist and collaborationist right has always held the image of the eternal, tsarist and Orthodox Russia close to heart. Personal ties between the Russian emigre community and French far right abound: among the most notable is the marriage of Jean-François Chiappe (1931-2001), who sat at the FN’s central committee and contributed to the far-right magazine Rivarol, to Maria Denikina, daughter of the white, anti-Bolshevik figurehead of the civil war, General Anton Denikin.

In the 1980s, the Russian writer and future National-Bolshevik Eduard Limonov introduced the eccentric Russian imperialist politician Vladimir Zhirinovsky to Jean-Marie Le Pen. The two leaders attempted to launch a kind of “international of nationalists,” but their irritable characters and ideological differences would eventually scupper the project.

The then unknown but already well-connected fascist philosopher Alexander Dugin interviewed Jean-Marie Le Pen for the leading Russian national-conservative newspaper Den’. Former diplomat and KGB chief Vladimir Kryuchkov (1924-2007), who played a leading role in the August 1991 conservative putsch that attempted to overthrow Mikhail Gorbachev, was also mentioned by Jean-Marie Le Pen as one of the instigators of these first post-Soviet contacts with the French far right.

Jean-Marie Le Pen (along with his then right-hand man Bruno Gollnisch) visited Russia several times, at least once in 1996 and again in 2003, while figures of the Russian nationalist right such as Sergey Baburin have attended FN meetings.

Once Marine Le Pen took over the reins of the FN in 2011, her family’s private ties to Russia became official party policy, in particular serving as a guiding principle in the area of foreign policy.

A good number of the people then surrounding her such as Emmanuel Leroy, Frédéric Châtillon, Jean-Luc Schaffhauser, or even her former international adviser, Aymeric Chauprade, boasted close links with Russia.

The attraction between the FN/RN and Russia is mutual and based on shared values. Key to understanding them is the concept of sovereignty, which includes several aspects:

The alliance isn’t just driven by shared ideology. When Marine Le Pen became head of the FN, she sought international recognition in a bid to strengthen her presidential credentials. This included working to secure a meeting with Vladimir Putin, which took place in March 2017.

She largely owes her rise to Russia’s highest circles to her family’s ties with the Orthodox and monarchist oligarch Konstantin Malofeev, introduced to the Le Pens by Glazunov. Malofeev’s TV channel Tsargrad regularly portrays Marine Le Pen in a glowing light.

The FN was also in need of financial support, and here again, Russia played a central role. For her 2017 presidential bid, Marine Le Pen obtained a loan of 9 million euros from a bank with close ties to Vladimir Putin. An investigation by the French investigative-news website Mediapart also revealed that in 2014 Jean-Marie Le Pen received 2 million euros from a Cyprus-based company controlled by a former KGB agent. While Marine Le Pen claimed that it was a loan, it remains repaid, and at the time it was perceived as a reward for the FN’s support of Russia’s annexation of Crimea.

The Kremlin has long had an interest in gaining allies with the potential to act as an echo chamber for its worldview. France is of particular interest because of the country’s relative independence from Washington and its status as a nuclear power and a permanent member of the UN Security Council. Major French companies are doing business in Russia and therefore inclined to lobby in Moscow’s favour, while France enjoys a rich Russian cultural scene due to the history of Russian emigration.

When foreign policy under President François Hollande (2012-2017) failed to play out in Russia’s favour, the Kremlin pivoted toward Marine Le Pen. But Moscow is typically more fair-weather friend than loyal ally. It partly deserted her in the 2017 presidential campaign when François Fillon (Les Républicains, LR) emerged as the leading right-wing candidate. For a while, Russian state TV presented him as a figure capable of rallying conservative religious and economic circles before swinging back in the direction of the RN.

Since then, Marine Le Pen has become one of the darlings of Russian television. She is painted as a leading European politician, an authentic patriot, Gaullism’s natural heir, and the standard-bearer of the idea of a Europe of nations and of “traditional” values.

A victory by Marine Le Pen in Sunday’s presidential election would obviously be welcome news for Russia. As the brutal war in Ukraine drags on, the country’s support in Europe has dwindled to illiberal democracies such as Hungary and Serbia.

Based on polling for the final round of the election, a victory by the Rassemblement National seems unlikely. But even if Le Pen again fails in her bid to win the French presidency, her presence and that of several other political actors sympathetic to Russia on the right and far right – and with some nuance, on the far left – will help ensure that Moscow’s views continue to be reflected in the French political arena.