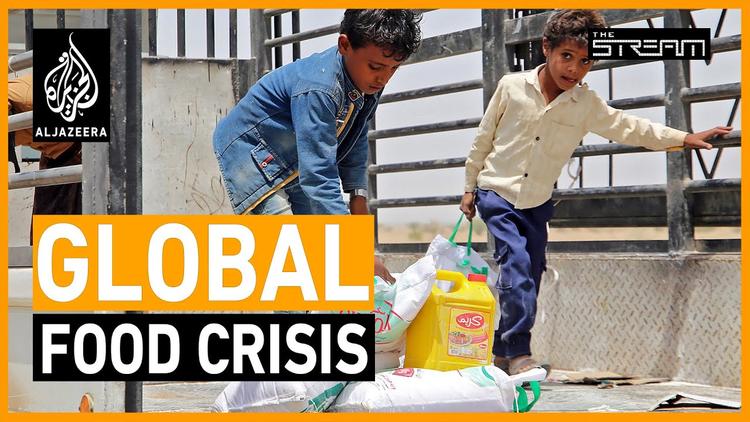 (Middle East Monitor ) – A young journalist friend of mine in Gaza, Mohammed Rafik Mhawesh, told me that food prices in the besieged territory have rocketed in recent weeks. Already impoverished families are struggling to put food on the table. “Food prices are surging dramatically,” he explained, “particularly since the beginning of the Russia-Ukraine war.”

The prices of essential food items, such as wheat and meat, have nearly doubled. The price of a chicken, for example, which was in any case only affordable by a small segment of Gaza’s population, has increased from 20 shekels (approximately $6) to 45NIS (around $14).

Such price hikes may be manageable in some parts of the world, but in an already near destitute society, which has been under a hermetic Israeli military siege for 15 years, a major food crisis is certainly forthcoming.

Article continues after bonus IC video
Al Jazeera English: “How is the war in Ukraine creating a global food emergency? | The Stream”

International charity Oxfam warned of this on 11 April when it reported that food prices across occupied Palestine have jumped by 25 per cent and, more alarmingly, wheat flour reserves in the Occupied Palestinian Territories could be “exhausted within three weeks”.

The impact of the Russia-Ukraine war has been felt around the world, in some places more than others. African and Middle Eastern countries, which have been battling poverty, hunger and unemployment for years, are the most affected.

However, Palestine is a whole different story. It is an occupied country that is almost entirely reliant on the action of an occupying power, Israel, which refuses to abide by international law and international humanitarian law. The issue for the Palestinians is complex, and yet almost every aspect of it is linked to Israel in one way or another.

Gaza has been under an Israeli economic blockade for many years. The amount of food that Israel allows into the Strip is rationed and manipulated by the occupation state as an act of collective punishment. In its report on Israel’s apartheid published last February, Amnesty International detailed Israeli restrictions on Palestinian food and fuel supplies. According to the rights group, Israel uses “mathematical formulas to determine how much food to allow into Gaza”, limiting supplies to what Tel Aviv deems “essential for the survival of the civilian population”.

Aside from many infrastructure issues resulting from the siege — an almost total lack of clean water, electricity and farming equipment, for example — Gaza has also lost much of its arable land to the Israeli military exclusion zone established alongside the nominal border around the Strip.

The West Bank is not much better off. Most Palestinians in the Occupied Territories are feeling the growing burden of the Israeli occupation, compounded with the devastating impact of the Covid-19 pandemic and structural weaknesses within the Palestinian Authority, which is rife with corruption and mismanagement.

The PA imports 95 per cent of its wheat, says Oxfam, and owns no grain storage facilities whatsoever. All such imports are transported via Israel, which controls all of Palestine’s access to the outside world. Since Israel itself imports nearly half of its grains and cereals from Ukraine, Palestinians are held hostage to this particular mechanism of the occupation.

Israel, however, has been amassing food supplies and is largely energy independent, while Palestinians are struggling on all levels. While the PA should shoulder part of the blame for investing in its bloated “security” apparatus at the expense of food security, Israel holds most of the keys to Palestinian survival.

With hundreds of Israeli military checkpoints across the occupied West Bank, cutting off communities from one another and farmers from their land, sustainable agriculture in Palestine is nearly impossible. This complex situation is complicated further by two major issues: the 700+ kilometres of the so-called “Separation Wall” which does not “separate” Israelis and Palestinians at all, but does deprive Palestinians of large tracts of their land unlawfully, mostly farming areas; and the outright theft of Palestinian water from the West Bank’s aquifers. While many Palestinian communities struggle to find drinking water in the summer, Israel never experiences any water shortage at any time of the year.

So-called Area C determined by the Oslo Accords constitutes nearly 60 per cent of the total area of the West Bank; it is under complete Israeli military control. Although sparsely populated comparatively speaking, it contains most of the Occupied Palestinian Territories’ agricultural land, especially areas in the very fertile Jordan Valley. Israel may have postponed its official annexation of Area C under international pressure, but it is practically annexed in any case, and Palestinians are slowly being driven out and replaced by a growing population of illegal Jewish-Israeli settlers.

The rapidly rising food prices are hurting the very farmers and herders who are responsible for filling the massive gaps caused by the global food insecurity resulting from war. According to Oxfam, the cost of animal feed is up by 60 per cent in the West Bank, which adds to the “existing burden” faced by herders, including “worsening violent attacks by Israeli settlers” and “forced displacement”, a euphemism for ethnic cleansing as part of Israel’s annexation policies.

Although it would probably bring partial relief, even a halt to the Russia-Ukraine war will not end Palestine’s food insecurity, as this issue is instigated and prolonged by specific Israeli policies. In the case of Gaza, the crisis is, in fact, completely manufactured by Israel with specific political objectives in mind. The infamous comment by former Israeli government advisor Dov Weisglass in 2006 explaining Israel’s motives behind the siege on Gaza, remains the guiding principle of Israel’s attitude towards the Strip: “The idea is to put the Palestinians on a diet, but not to make them die of hunger.”

Palestine thus needs immediate attention to stave off a major food crisis. Gaza’s long-standing extreme poverty and high unemployment leaves it with no margins whatsoever to accommodate any more calamitous restrictions. However, anything done now can only be a short-term fix. A serious conversation involving Palestinians, Arab countries, the UN Food and Agriculture Organisation and other parties must take place to discuss and resolve Palestine’s food insecurity. For the people of occupied Palestine, this is the very real existential threat.