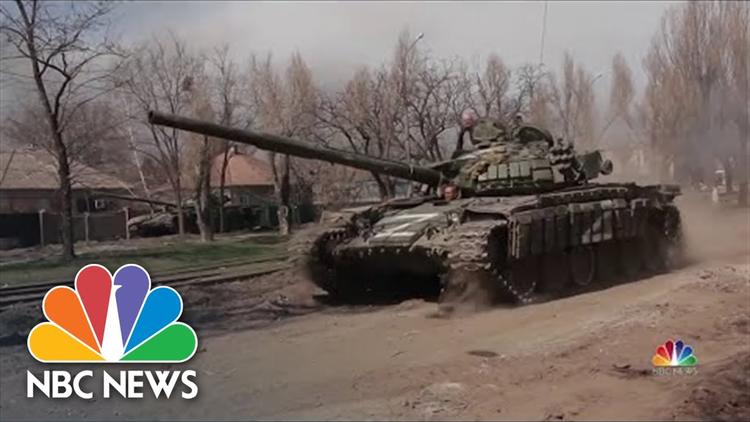 We have to begin asking the question of what will happen if Russia succeeds in implementing a long-term occupation of the Donbass region and of other Ukrainian territories down to the port of Odessa, making a land bridge to Crimea. Such a Russian occupation of land claimed by a prospective member of the European Union will have long-lasting security implications. The potential consequences may be better imagined if we make analogy with Israel, Palestine and the Middle East.

Let us assume that Ukraine is strong enough to make a Russian capture of the capital of Kyiv and, indeed, of most of the country too costly for Russian President Vladimir Putin, who has already seen thousands of his troops come home in body bags.

But let us equally assume that Ukraine is too weak to stop a Russian occupation of Donbass and points south and west – Luhansk, Donetsk, Melitopol, Kherson and Odessa.

That is, what if this map from April 4 does not change much going forward:

Latest military map of Ukraine as of April 4. Red us the Russian occupied areas. No more Russians around Kyiv. pic.twitter.com/QsGyZzKWac

What would such a Russian occupation mean for Europe and the United States? The answer is that it would be a constant irritant and could well give rise to Russia-backed terrorism.

The Ukraine government will never accept such a status quo, and will constantly be looking for ways to increase the cost for Russia of staying in these areas. A certain portion of the Ukrainians will mount a long-term insurgency, which Russia will brand “terrorism.”

Poland, Hungary and Romania would have to decide if they want to be conduits of arms to the anti-Russian forces in the Occupied parts of Ukraine. If so, Russia will find ways of punishing and hitting them. In the Cold War, the Red Army Faction unleashed a wave of terrorism in West Germany in the 1970s and 1980s.

If Western European states funnel arms to the insurgents through these neighboring states, Russia will also find ways of hitting them. AfD in Germany and Marine Le Pen and movements to her right in France could well develop terrorist cells working for Russia.

Russia-backed far-right domestic terrorism in the US is also a real possibility, and it is scary that elements of the GOP might be complaisant or even enthusiastic.

The modern history of such occupations is mixed. The Israeli example is the most successful. In the West Bank, which Tel Aviv plotted to seize from the late 1950s and which they finally took in 1967, the Israelis have transferred hundreds of thousands of their citizens to the occupied territory and have put the resentful Palestinian population under tight surveillance and used roads and checkpoints to cut them off from one another.

Where neighboring countries gave support to the Palestinians, Israel hit them hard, bombing Jordan and bombing and invading Lebanon, and defeating Syria and Egypt militarily to make them back off. Israel managed to actually turn Jordan and Egypt around and enlist them in policing the Palestinians, with US support, and managed to cow Lebanon and Syria for the most part.

Because of US and European backing, the Israelis have made their Occupation stick despite vast local and regional opposition. It created a lot of violence and the situation is horrid, but policy-wise it is a success from the point of view of the Israeli Right.

It helped Israel that the West helped it get nuclear weapons, so that enemies like Egypt could not go too far without risking being nuked. Likewise, NATO cannot take on Russia in a conventional war because of Moscow’s immense nuclear arsenal.

Whether Russia could pull off a similar success in the teeth of opposition from the US and Europe is not clear, but it cannot be ruled out. Russia has an advantage over Israel as an occupier in Ukraine, in that Israelis have not been able to wipe out Palestinian identity, but Russia could plausibly raise the next generation of southeastern Ukrainians as Russians, using state schools and other institutions.

Still, Russia would be vulnerable to violence emanating from Ukraine. Israel’s nukes, after all, do not protect it from terrorism or from guerrilla attacks. In 2006 the small Lebanese party-militia, Hezbollah, forced a fourth of Israelis from their homes with small rocket attacks. Europe could become embroiled in tit-for-tat small-scale attacks despite the doctrine of mutual assured destruction..

Externally, Hungary has already backed Putin. France will swing to him if LePen wins the presidential run-off.

We cannot guess how many neighbors of Ukraine can be turned, either through Russian threats of violence, actual terrorism, or through Russian tampering with elections (as Putin did in France, where a Russian bank loaned money to Marine LePen’s far-right party, which backs Moscow). That is, some of them may be put in the position of Jordan and Egypt, of having to de facto acquiesce in the occupation for their own survival.

Even the US may dump Ukraine if Trump or a Trump clone wins the White House, pursuing the cult of Putin as the great white Christian hope.

Poland is more likely to be a ‘steadfastness front’ on the Syrian model.

Nor should we assume that economic pressure would be enough to get Putin back out of Donbass etc. Russia is too big an economy to be given the Iran treatment successfully, and petroleum is such a fungible commodity that sanctioning it is seldom fully effective. China could play the role of giving Russia an economic and military lifeline.

This Russian “success” would imply a continually destabilized and conflict-ridden Europe.

Of course, in the medium to long term, Russia could face unacceptable costs, as Israel did in southern Lebanon, from which the Israelis withdrew in 2000 after a costly 18-year occupation. Failed occupations are more common than successful ones, as with the US in Iraq. They also, however, entail a decade or two decades of violence and instability, even if the occupier eventually withdraws.

2/24 changed the world much more radically than 9/11 ever did, and we will be living with its aftermath for many years to come.