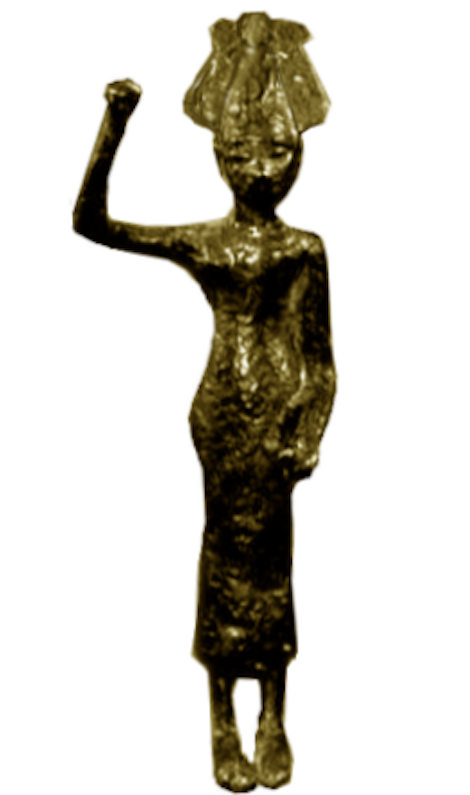 Ann Arbor (Informed Comment) – A farmer plowing his land in Khan Younis, the Gaza Strip, recently found the head of a statuette of the ancient Levantine goddess Anat from 4,500 years ago, AFP reports.

Everything in Israel/Palestine is political, including, and maybe especially, archeology.

In 2500 BCE the ancient Levantine civilization, sometimes called “proto-Canaanite,” was in full flourish. Several small kingdoms ruled over what is now Lebanon, Syria, Jordan, Palestine and Israel. The Canaanite or West Semitic (a linguistic, not a racial term) languages predominated. It was the early bronze age. A people referred to as Ken’an, Canaanites in English, had come to dominate Jerusalem and its hinterlands. There was no Israel, or any Israelites. That would be a development, out of the Canaanite or ancient Levantine peoples, of perhaps 1,700 years later.

And that is where politics comes in, since the Palestinians in Gaza can claim that their forebears lived there 4500 years ago before there were any Israelis. Pro-Palestinian writers increasingly appropriate the Canaanites as their ancestors, even describing them as ancient Arabs.

Of the discovery of the Anat bust, Naser al-Yafawi wrote, “Based on the foregoing, we see that the series of modern archeological discoveries confirms the depth of the ancient Palestinian civilization, and has sent a message that we are the owners of the land and history and refutes the falsehood of the Zionists.”

The richest record of ancient Levantine religion was found beginning in 1928 at Ras Shamra, a port in northern Syria, which was in ancient times Ugarit.

From those clay tablets scholars have reconstructed the myths and the pantheon of ancient Levantine or “Canaanite” religion.

Mark S. Smith argues that the gods of this civilization fell into four tiers. At the top was Il or Ilu, the creator-god and the patron of kings and princes. He was not much involved in the lives of ordinary people, but set the big movements of fate. There don’t appear to have been temples to him.

The second tier consisted of dynamic nature gods, who often also embodied lively emotions and engaged in battle. These included Yamm, the god of the sea, Baal, the storm god, and Anat, the goddess of both beauty of war (and so a predecessor of the Greek Athena, and maybe a model for her).

The third tier of gods were craftsmen, such as the great builder Kothar, the equivalent of the later Greek deity Hephaistos, with whom he was identified in the Hellenistic and Roman periods.

The fourth tier of gods were messengers, mal’akh, whence comes the Hebrew and Arabic words for “angels”.

Wilfred G. E. Watson explains that Anat is the mistress of the heavens, the mistress of sovereignty, a huntress and a warrior– the Destroyer, bringer of Ruin. She is depicted has having wings and horns.

In battle, she uses a bow that she purloined, and she defeats most of the other dynamic nature gods, including Yamm or Lord Sea.

One of her names is Batulat, the Virgin (another parallel to the later Athena), and it has been suggested that the word at that time meant something like “perpetual adolescent girl,” so that she never marries or has children, allowing her to remain a warrior.

(Batul survives in Arabic as a word for virgin, and was applied to Mother Mary in Islam.)

Anat may be Baal’s sister, and is shown as standing up for the rights of her bother. Baal alone among the major gods had not been granted his own palace by Ilu, so Anat goes to the chief of gods and demands he be awarded one. He acquiesces to her fierce demand, and assigns Kothar to build it.

A major story cycle has to do with Baal’s rivalry with Mawt, the god of the dead and the underworld. This is in part a nature allegory, since Baal sends down rains and Mawt is in charge of droughts. Baal goes down to the underworld and is killed by Mawt, so that drought and famine encompass the world.

Anat goes looking for Baal and discovers what has happened. She kills Mawt, after which Baal is resurrected.

So Anat is the world-savior.

The Pharaonic Egyptians loved her to death once her cult spread south from Gaza. She was a special favorite of Ramses II (r. 1273-1213 BCE). Egyptians depicted her as nude and riding on a lion.

It is a central feature of modern nationalism that contemporary nation-states make claims on ancient history as part of the construction of identity. Palestinian nationalism is showing itself just as vital and adept in this endeavor as all the others.