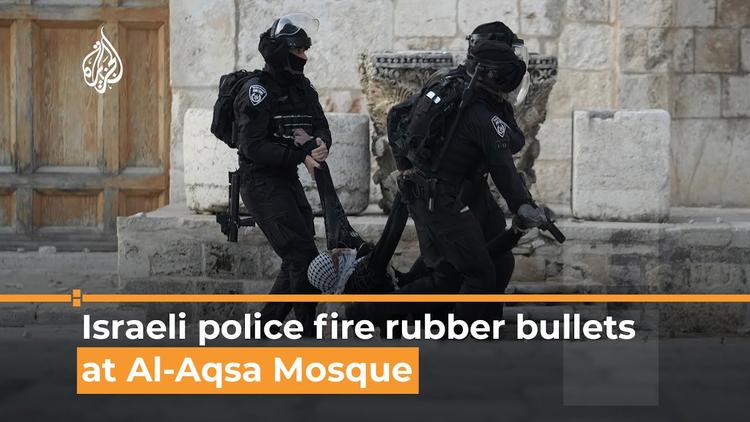 Ann Arbor (Informed Comment) – For the first time on Friday, Israeli forces deployed drones to deliver military-grade tear gas at the al-Aqsa Mosque complex in Jerusalem, attacking civilians. Nevertheless, later that day some 150,000 Palestinians gathered at the complex to pray afternoon, sunset and evening prayers and supererogatory (extra) prayers on the third Friday of the holy fasting month of Ramadan. So reports the Israeli newspaper Arab 48.

The al-Aqsa Mosque compound is the third holiest site in the religion of Islam, after the shrine cities of Mecca and Medina in Saudi Arabia. There are some 1.8 billion Muslims in the world. In the early years of the preaching of the Prophet Muhammad, his believers would pray toward Jerusalem. Around 624, Muslim tradition holds, God commanded them to pray toward Mecca instead.

As they had done on several occasions this past week, Israeli commandos invaded the Mosque complex at the time of dawn prayers, deploying rubber-coated steel bullets, stun grenades and firing tear gas at the hapless worshipers. For the first time, some of the tear gas was delivered by drone. Some 57 persons were injured, including 9 children, most of them suffering ill effects from teargas inhalation, while others were struck by rubber-coated steel bullets. Youth and journalists suffered from the latter. Red Crescent medical teams set up triage at the Mosque to treat 31 of the victims, while 14 had to be taken to hospital.

The best explanation I’ve seen for why in the world the Israeli security forces are bothering Muslims worshiping at al-Aqsa during the fasting month of Ramadan was put forward by Jim Zogby, who wrote on Twitter, “Palestinians understand that Israel intends to do to Jerusalem what they did in Hebron. Populate Arab neighborhoods w/ protected extremist settlers, making daily life impossible for Palestinians. Then slowly taking over the mosque area & dividing it in favor of Jewish worshippers ”

Palestinians understand that Israel intends to do to Jerusalem what they did in Hebron. Populate Arab neighborhoods w/ protected extremist settlers, making daily life impossible for Palestinians. Then slowly taking over the mosque area & dividing it in favor of Jewish worshippers pic.twitter.com/ELjk1efhim

The al-Aqsa Mosque sits atop what Israelis call the Temple Mount, where they believe the Second Temple stood until the uprising against the Roman Empire of the Year 70, at which time the Romans destroyed the Temple. After another revolt, the Bar Kochba in 132–136 AD, Jews were forbidden to live in Jerusalem, and the Romans made it a center for the worship of Zeus and Venus until the 300s, when they turned to Christinity. Right wing Israeli extremists want to tear down the al-Aqsa Mosque and build the Third Temple. Zogby thinks that the incremental steps being taken by Israel to expel Palestinians from Jerusalem and to crack down hard on mass worship ceremonies at al-Aqsa are intended to end with a Jewish supremacist claim on all the sacred space of the “noble sanctuary” (al-haram al-sharif).

Israeli actions at al-Aqsa endanger US security. Usama Bin Laden gave Israeli provocations in Jerusalem against Palestinians there as one of the reasons he bombed the Pentagon and the World Trade towers.

In 2021, Israeli interference in worship at the al-Aqsa Mosque led to a series of demonstrations in the West Bank, in Israel itself, in Occupied East Jerusalem, and in Israel itself. The Israeli actions thus united Palestinians across the borders in which the Israelis have attempted to confine them. When Gaza militants fired tiny rockets over at Israel, the Israelis replied with massive military force, bombing civilian cities the way Russia is doing to Ukraine.