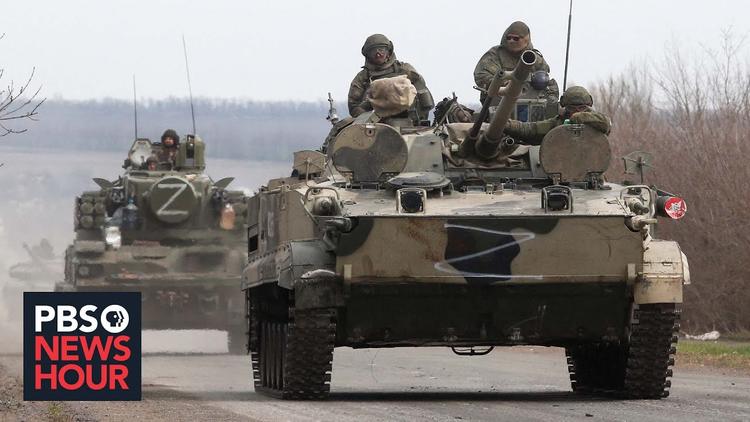 By Frank Ledwidge, University of Portsmouth | –

There will be no peace deals, no ceasefires and no surrenders in Ukraine. The next two months will bring what US defence officials have called “a knife fight” in the area the Ukrainian army call “The Joint Forces Operation” (JFO). We know this region better as Donbas.

For eight years the two sides have fought there, with Russian regular army elements supplementing separatist units. Now, after defeat in Kyiv, Russian forces are redeploying there to take on Ukraine’s best and most experienced units. The battles to come will resemble more the manoeuvre battles of the second world war than those fought around the cities of Kyiv, Mariupol and Sumy in the six weeks the war has raged so far. Nonetheless, the Russians are unlikely to prevail.

After their recent defeat in the north, Russia has made some significant changes. Most importantly, an overall commander has been appointed. The importance of this is not the identity or experience of the individual Colonel General Alexander Dvornikov – rather it is the fact that the Russians will have a single command staff to co-ordinate and attempt to achieve a single focused and ostensibly realistic operational objective, instead of three separate competing ones in the north, south and east.

Russia is desperately trying to replace its considerable losses, up to 20% of its force already. Those efforts will make little difference. The conscript troops and reactivated reserves called up recently will not be ready for months. Nonetheless the force the Russians will amass will be formidable, and with shorter and better established supply lines into Russia they may be able to avoid some of the appalling foul ups which have characterised their war so far.

Equally importantly, in theory, they should be able to use their air force to greater effect, being closer to its bases and air defence cover. But recent events have shown that theory is a poor guide to what the Ukrainian air defences can achieve. Finally, the Russian army has always been and remains very strong in artillery, the arm they call “the Red God of War”.

These forces are pitched against Ukrainian defenders deployed in several salients or “bulges” – areas surrounded on three sides by Russian-backed separatists. Throughout military history these have offered the possibility of trapping enemy forces in “pockets”. Military historians will recall the Ypres Salient (1914-1918), Verdun (1916), Kursk (1943) and of course the Battle of the Bulge (1944-45) as the most prominent examples of this.

The Russians will seek to probe and break through Ukrainian defences, surround those salients, trap the Ukrainians and annihilate them using their advantages in air and artillery power,
or at the very least force them to retreat. Russian-backed separatist troops successfully conducted such an operation on a relatively small scale at the Battle of Debaltseve in February 2015, where artillery was used to devastating effect.

US military analysts report they expect Ukrainian positions in the Severodonetsk Salient, and especially around the town of Sloviansk to be the initial targets for a Russian attempt at encirclement, with an eventual strike at the city of Dnipro – a major communications and road hub – to secure the entire region east of the Dneieper River. All of this this is very well known by the Ukrainian commander, General Valerii Zaluzhnyi and his staff. The Russians want quick battles of annihilation. What they will get is a war of attrition.

Ukrainian commanders fully and completely understand from bitter experience the risks of being surrounded. They have demonstrated the qualities of agility and tactical innovation required for this kind of battle. Even better, they know what is coming. Nato air and space reconnaissance and surveillance as well as Ukraine’s own intelligence capabilities will ensure that there will be no surprise attacks.

With continued and increased western assistance, Ukraine should be able to sustain a long war better than the Russians. Nato assistance will be vital in firming up the defenders’ armoured units giving them a far greater chance to counterattack and retake ground. Retaining some level of control of the air, though, is the single most important factor, which is why retaining and strengthening anti-aircraft missile defences is an absolute priority.

Despite Russia’s advantages in technology and equipment, Ukrainian forces will continue to exploit Russia’s chronic and acute weaknesses in logistics and supply.

Finally, it is one of the firmest rules of warfare that a successful attacker should enjoy a three-to-one preponderance. Russia’s depleted force has nowhere near that preponderance. There are exceptions to this general three-to-one rule – such as the Gulf War of 1991 where a well-led and equipped US-led coalition annihilated a larger and combat-experienced Iraqi army. In such cases, the attackers more than made up for a relative lack of quantity with quality in training, planning and the crucial moral components of cohesion and motivation.

In the spring battles of 2022 it is the defenders, not the attackers who are in abundant possession of those factors
against a Russian army beset by chronic issues of endemic corruption professionalism and training which has rendered them apparently incapable of conducting complex operations. These problems are not going away, and will not be solved by a change in command or operational focus.

Above all the ravages inflicted upon them by the Ukrainian armed forces have cut away at their manpower, equipment and morale. The next battle will begin within the next two weeks. Attempting to predict its precise course is ultimately futile, not even the opposing generals know that. It may well be that the Russian army’s fate has already been sealed in what is likely to be a long war.

The single qualification to this may be that Russia could default to escalation using “weapons of mass destruction” of one form or another – whether tactical nuclear warheads or chemical weapons. Reports from Mariupol that the Russians may already have resorted to the latter would, if proved, show that Russia is prepared to resort to something even more serious if they fear a complete military humiliation in Ukraine.