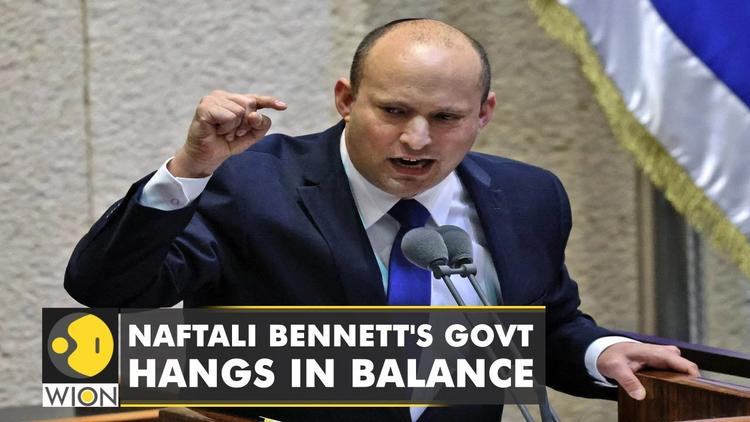 ( Middle East Monitor) – Israel’s coalition government of right-wing Prime Minister, Naftali Bennett, is on the verge of collapse, which is unsurprising. Israeli politics, after all, is among the most fractious in the world, and this particular coalition was born out of the obsessive desire to dethrone Israel’s former leader, Benjamin Netanyahu.

While Netanyahu was successfully ousted in June 2021, Bennett’s coalition has been left to contend with the painful reality that its odd political components have very little in common.

On 6 April, Israeli lawmaker, Ildit Salman defected from the coalition, leaving Bennett and his temporary allies wrangling with the fact that their Knesset (Israel’s Parliament) coalition no longer has a majority. Now that the Knesset count stands at 60-60, a single defection could potentially send Israelis back to the voting booth, which has been quite habitual recently.

Both Bennett and Shaked left the Jewish Home in 2018 to form Yamina. Although the latter won only seven seats in the March 2021 elections, the far-right party proved to be the kingmaker, which allowed the anti-Netanyahu coalition to be formed. The only alternative to this current coalition would have been a government in which Netanyahu and Bennett would alternate the prime minister post. Though Bennett is a protegé of Netanyahu, the current prime minister knew too well that his former boss cannot be trusted.

So, instead, Bennett opted to join a hotchpotch coalition of political desperados, each joining an unlikely government for simply having no other option. For example, Yesh Atid (17 seats), and Kahol Lavan (8 seats), once part of the Blue and White centre-right coalition, betrayed their political base by joining far-right Yamina and, consequently, leaving behind Telem of Moshe Yalon, which now has no Knesset representation.

The same can be said of Labour (7 seats) and Meretz (6 seats) who, earlier, were the backbone of the Israeli political establishment – in 1992 they had 56 seats combined. Losing faith in their own political base, they opted to join their supposed ideological nemesis, instead of enduring the painstaking process of breathing life into a dying camp.

The captivating part of the story is the United Arab List of Mansour Abbas, which is rightly perceived to have betrayed its Arab base in Israel and its own Palestinian people everywhere else. As the Israeli army is cracking down on Palestinian communities throughout historic Palestine, including Al-Aqsa Mosque and the Naqab – Mansour Abbas’ own base – this strange political creature remains committed to Bennett, though nervous about future possibilities, especially that the nature of the Israeli attacks on Palestinians are increasingly shifting towards a religious war.

Consequently, it is hard to imagine that Bennett’s government could realistically survive till 2025. In fact, it is quite rare in Israeli politics that any government coalition has served its full four-year term. Still, Israel’s historic political instability is worsening. In fact, Bennett’s government is the outcome of an agonising political process that saw Israeli voters cast their votes in four different general elections in only two years.

Perhaps, what is keeping Bennett’s coalition together, though precariously, is the menacing image of Netanyahu, the current opposition leader, sinisterly watching from across the Knesset aisles while waiting for the right opportunity to pounce. Some Israeli analysts even argue that the defection of MK Salman was largely instigated by the abuse and intimidation she received from Netanyahu’s Likud party, which saw her as a traitor to their right-wing agenda.

Regardless of the fate of Bennett’s government, Israel’s political crisis will continue indefinitely, and there are reasons for this.

Though the Israeli right has dominated the country’s politics for many years, especially since 1996, it remains fractious and opportunistic. The constant need to feed the insatiable appetite of the country’s powerful right-wing constituency keeps pushing Israel’s right-wing parties further to the right. They are merely united around such values as the racial and religious supremacy of Israeli Jews, their hate for Palestinians and Arabs, the desire to expand the illegal Jewish settlements and the rejection of any mediated solution that would provide Palestinians with their basic human rights.

The left in Israel is, frankly, not a left at all. It is recognised as such, largely because of its ‘peace-process’ legacy, which died with the assassination of Labour Minister, Yitzhak Rabi, in 1995. Tellingly, Rabin was not a peacenik but one of Israel’s most militant and violent leaders. However, the erroneous association, linking any Israeli leader with the ‘peace process’, automatically classified that individual as a ‘leftist’. According to Israeli analyst Oz Aruch, this also applied to Ariel Sharon. The name of the late notorious Israeli prime minister and Army General is associated with the Sabra and Shatila massacre, along with other horrific episodes.

Without a real ideology and without a ‘peace process’, or even the desire to engage in one, the Israeli left has become irrelevant.

The same applies to the centre which, by definition, is the political camp that occupies the space between the right and the left. With the right being in constant redefinition and the left having no strong ideological base, the Israeli centre has proven equally hopeless. The outcome of the April 2019 elections, when the centre coalition Blue and White obtained 35 seats, should have been a watershed moment for Israel’s political centre. This ultimately culminated to nil, and eventually led to the collapse of Blue and White itself.

For the first time in many years, Israel finds itself in a position where it is no longer the only party that is shaping events or determining outcomes in the country. Therefore, Israeli political instability will worsen. Contrastingly, Palestinians are finally becoming a factor in Israeli politics and, through their popular resistance, can mobilise to put pressure on Israel, as has been the case in recent years.

Israel is now facing the dilemma of either ignoring this new Palestinian factor, at its own peril, or accepting the inescapable fact that Israel can never enjoy stability while Palestinians remain occupied, confined and oppressed.

– Dr. Ramzy Baroud is a journalist and the Editor of The Palestine Chronicle. He is the author of six books. His latest book, co-edited with Ilan Pappé, is “Our Vision for Liberation: Engaged Palestinian Leaders and Intellectuals Speak out”. Baroud is a Non-resident Senior Research Fellow at the Centre for Islam and Global Affairs (CIGA). His website is www.ramzybaroud.net