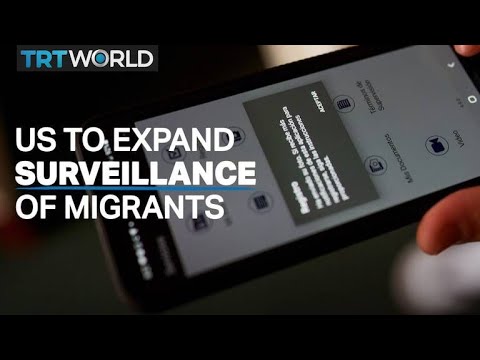 ( Otherwords.org ) – Growing up in the Southern California suburbs, government surveillance never worried me. But my Syrian-American parents were more cautious. They would often warn me against talking about politics over the phone — in case Big Brother was snooping.

As a teenager, I dismissed their concerns. “Listen, we’re not in the Middle East,” I would counter.

My parents knew better though. I soon received a rude awakening in the aftermath of the September 11 attacks.

A new investigation reveals the immigration agency has collected data on most Americans. It’s the latest case in a worrying trend.

Almost 1,200 people, mostly Muslims, were rounded up and detained after the attacks, often for months without charges. Arabs and South Asians were racially profiled and deported for minor immigration violations. The FBI began surveilling mosques across America.

As part of the homeland security reforms following 9/11, Congress created the U.S. Immigration and Customs Enforcement (ICE) agency in 2003 to ostensibly fight terrorism and enforce immigration law. But the truth is, ICE went on to use its newly established authority to spy on nearly everyone in the United States.

An independent, two-year investigation has now revealed that ICE collected data on hundreds of millions of Americans under a legally — and ethically — questionable surveillance system largely outside of public oversight.

Georgetown Law’s Center on Privacy and Technology uncovered this dragnet after filing over 200 Freedom of Information Act requests and reviewing ICE’s contracting records from 2008 to 2021.

In its report, released May 10, the Center found that ICE has spied on most Americans without a warrant and circumvented many state privacy laws, such as those in California. The authors conclude: “ICE now operates as a domestic surveillance agency.”

ICE has carried out this surveillance by turning to third parties like state Departments of Motor Vehicles, large utility companies, and private data brokers like LexisNexis Risk Solutions.

From these sources, ICE gained access to driver’s license data for 3 in 4 adults living in the United States, and scanned a third of the license photos with facial recognition technology. ICE is also able to view over 218 million utility customers’ records across the country, including for over half of California’s residents.

This surveillance network has unsurprisingly hit immigrant communities hardest. The agency has targeted immigrants for deportation by cruelly exploiting their trust in public institutions, such as when undocumented people apply for a driver’s license or sign up for essential utilities like water and electricity.

These practices point to an agency that has clearly overstepped its boundaries. ICE does not have the congressional authority to do this kind of bulk data collection on the public. This overreach underscores the need to shift U.S. immigration law away from the deportation-driven status quo.

Unfortunately, this ICE program isn’t an isolated case. It’s part of a broader domestic surveillance apparatus that spans decades and multiple federal agencies — including the FBI, CIA, and NSA — and ultimately impacts all of us.

During the 1960s and ‘70s, federal agencies spied on anti-Vietnam War protesters and civil rights leaders. More recently, in 2013 whistleblower Edward Snowden revealed that the National Security Agency created a massive surveillance program that secretly gathered telephone records on millions of Americans, regardless of whether they were suspected of any wrongdoing.

And this February, newly declassified documents exposed the CIA’s own secret bulk data collection program to spy on Americans. The type of data remains classified, but Senators Ron Wyden (D-OR) and Martin Heinrich (D-NM) have called for greater transparency on the agency’s surveillance of Americans.

We should all be alarmed by this growing domestic surveillance state. Left unchecked, it corrodes public trust in our democratic institutions and undermines our civil liberties, most notably the embattled right to privacy.

The history of government surveillance demonstrates that we can never take this right for granted.