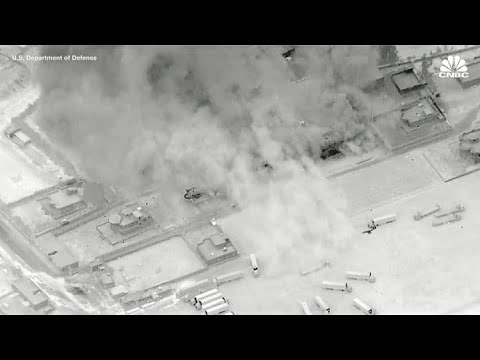 Ann Arbor (Informed Comment) – Memorial Day or Decoration Day (referring to the decoration of the graves of soldiers killed in combat) began after the Civil War and has been commemorated since 1868. It is no wonder that the mourning began then. Historian J. David Hacker has estimated that 750,000 troops died in the war, the biggest total for any war in which the US was involved. Nearly 300,000 died in WW II.

Today instead of writing about the war dead, I’d like to consider the plight of the 900 U.S. troops in Syria. They should not be there, and their presence is a mixed bag when it comes to U.S. national security, especially in view of the new Cold War between Russia and the United States and their proxy war in Ukraine. As with eastern Ukraine, Syria is crawling with Russian troops and air force planes.

Whatever the US troops are accomplishing in eastern Syria is not worth it, especially since their mission seems poorly or illegally defined since the days of Trump. This is a powder keg, given the outbreak of the war in Ukraine. President Biden said that he did not want US troops in Ukraine because if they came into conflict with Russian troops, that would be WW III. Well, the same consideration should lead him to get out of Syria, which is a Russian sphere of influence now.

After what happened in Afghanistan when the US left, Biden may be reluctant to pull US forces out of Syria. But the two situations are not similar. Russia and Iran have already shown that they will go to great lengths to keep Bashar al-Assad in power. There were no outside powers willing and able to prop up Ghani in Afghanistan. Besides, the real danger is in staying in Syria without a clear mission, cheek by jowl with Russia and Iran, not in leaving it.

The basis on which the Obama administration sent troops into eastern Syria was self-defense. The ISIL terrorist organization had formed a mini-state in eastern Syria and northern Iraq and had hit NATO allies like France as well as using the internet to encourage stochastic or random terrorism against the United States.

The Syrian Kurdish militia, the Peoples Protection Units or YPG, provided the infantry to defeat ISIL and take its capital, Raqqa. The YPG captured Raqqa on October 17, 2017, receiving US air support, and having some US troops embedded among them.

So there is no longer any self-defense justification for US troops to be in Syria. In the meantime, the government of Bashar al-Assad, backed by the Russian Aerospace Forces and Shiite militias from Lebanon and Iraq, along with a small contingent of Iranian Revolutionary Guards, defeated most of the rebel forces that had challenged the regime, most of the Sunni Arabs of a fundamentalist bent. They are now holed up in the northern, rural Idlib Province, along with some 3 million residents and internally displaced persons.

The Syrian government, which is gradually regaining its sovereignty and recognition, has said that it wants the US troops out. Syrian Foreign Minister Faisal al-Miqdad says the US troop presence is “illegal,” and has called on the Syrian Kurds to stop cooperating with Washington, saying that the US will have to leave sooner or later.

In mid-October of 2019, Trump abruptly ordered US troops out of Syria and gave Turkey’s president Tayyip Erdogan a green lignt to invade the regions of the Syrian Kurds, who had been US allies against ISIL. Most US troops were pulled out, to the dismay and fury of their erstwhile Kurdish allies, who felt abandoned and betrayed. Their tanks headed for Iraqi, festooned with rotten eggplants and tomatoes cast at them by angry Kurdish villagers, who soon thereafter had to run away from Erdogan’s invading forces.

Someone in the White House, however, manipulated Trump into keeping a few hundred US troops in southeastern Syria at Deir al-Zor around some of Syria’s oil fields, the oil from which was then going to the Kurds and not to the Damascus government. The staffers told Trump, who always had a thing about stealing other people’s oil, that he should keep those US troops there to siphon off Syrian oil, and Trump was persuaded. In the end a scheme for an American company to exploit Syria’s oil fell through, which is just as well, since that would have been a war crime.

Whatever you think of the Obama administration’s self-defense argument, it at least had some merit and ISIL was a dangerous statelet that roiled the world for a few years.

The current charge of the 900 remaining US troops seems awfully vague, and one fears they might actually be there to make sure the petroleum in Deir al-Zor goes to the Kurds rather than to the Damascus government. This mission is problematic in international law and weird because the US has thrown the Syrian Kurds anyway to the Turkish wolves.

The US troops at the Green Village Base near the al-Omar oil field, one of Syria’s largest, have recently come under rocket fire from Shiite militias, as Jared Szuba explains at Al-Monitor. These ongoing attacks will not stop.

Erdogan is making noises about another invasion of Syria, to establish a 20-mile deep security zone between the YPG Kurds and Turkey’s border, inside northern Syria. The Biden administration has warned Erdogan not to do it, but it is hard to see how Washington could stop it. Since the US is facilitating the transfer to the Syrian Kurds of the oil of the al-Omar field, Ankara sees them as an enemy, even though the US and Turkey are supposedly NATO allies. Erdogan is using his position in NATO to block the accession of Sweden and Finland until they agree to declare the YPG a terrorist organization. The US, which has long been allied with the YPG, has declined to so designate them, of course. The US does view the Kurdistan Workers Party (PKK), based in southeastern Turkey and in Qandil in Iraq, as a terrorist organization, but sees the YPG as a separate group rather than as a branch of the PKK.

There is more bad news. Alarmed at Erdogan’s invasion plans, Russia, for which Syria is a major military theater of operations and client state, sent surveillance helicopters and fighter jets to Qamishli airport in eastern Syria to observe the Turkish border. US troops are deployed near Qamishli, according to the pan-Arab daily al-Sharq al-Awsat (The Middle East).

It is nervous-making to have 900 US troops in the midst of the ongoing Syrian maelstrom, with continual possibilities for war to break out if they get caught in the crossfire in some dispute among the various players in Syria, with the behemoth being Vladimir Putin’s Russian army and air force.