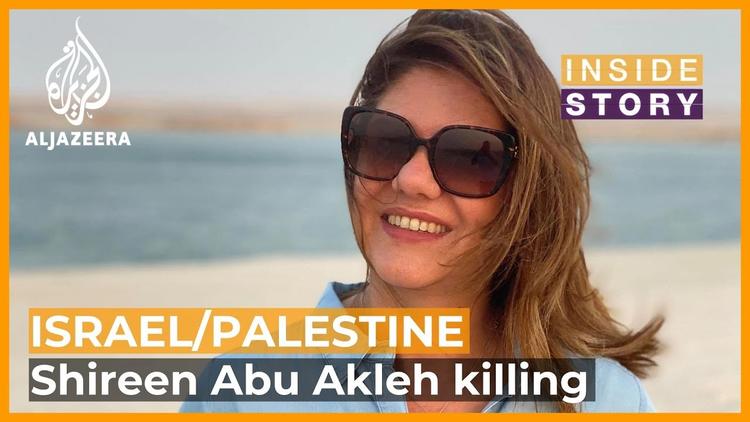 Ann Arbor (Informed Comment) – The Al Jazeera news network, based in Qatar, has received from the Palestine Authority an image of the bullet that killed American journalist Shireen Abu Akleh and has concluded that it was certainly fired from an Israeli M4 rifle. The green-tipped, 5.56mm caliber bullet is deadly when fired at a human being and would only be used with an intent to kill. It was recovered from her skull.

Abu Akleh, 51, a US citizen of Palestinian heritage, was covering an Israeli raid on the Jenin refugee camp in the Palestinian West Bank with a camera crew on May 12, 2022, when she was shot dead by an Israeli sniper with a bullet just below her helmet–a skilled kill shot. She and the others were all wearing vests that prominently said press, and they had shown themselves to the Israel army in the area. The snipers hit one of her colleagues in the back, and kept the entire team pinned down for several minutes with continued fire, possibly to ensure that they could not get to Shireen to administer first aid. It seems likely that the Israeli army intended to do things to the refugees in Jenin that they did not want filmed by Al Jazeera.

Abu Akleh had been covering the millions of Palestinians under Israeli military rule since the late 1990s and was a beloved figure among Palestinians, who hung on every word of her reports.

I noted in my initial analysis of the murder, “The Israeli army has killed 50 Palestinian journalists in the past two decades. During the Great March of Return protests in Gaza, Israeli snipers routinely shot unarmed protesters, as well as journalists and medics. In 2018 alone they killed 180 and wounded 6,000 innocent civilian protesters.”

The Washington Post and CNN conducted independent investigations of Abu Akleh’s killing and concluded decisively that she was killed by an Israeli soldier. CNN’s report included an inspection of the precise location where she was killed, looking at the bullet marks on the tree near her. As MEMO quoted from it, “A British army veteran and security consultant who was one of the analysts contacted by CNN explicitly stated: ‘The relatively tight grouping of the rounds indicate Shireen was intentionally targeted with aimed shots and not the victim of random or stray fire'”

The Israeli propaganda machine went into overdrive as the news of Shireen’s assassination broke. Prime Minister Naftali Bennett blamed Palestinians for her death, saying she got caught in the cross-fire. The Israeli military released phony video intended to muddy the waters, which was quickly shown to be fraudulent. The initial reports in most European and North American news outlets put her death in the passive mood, carefully avoiding the obvious conclusion that an Israeli sniper killed her. She wasn’t just “killed” in some metaphysical, disembodied manner. The obfuscation by high Israeli politicians and officers and the American “on the one hand, on the other hand” approach to news succeeded in deflecting blame from the Israeli army during the crucial first days after the killing. Only once world attention had turned elsewhere did some US outlets come back and report the truth, but by that time this second round was relegated to the back pages.

Infuriatingly, the U.S. State Department under Antony Blinken refused to apportion blame to Israel. Blinken called for an impartial investigation but the US State Department does not appear to be conducting one.. Blinken said that the reason it isn’t a scandal that the US and Israel refuse to sign the Rome Statute or to join the International Criminal Court (which would give it jurisdiction over them) was that the US and Israel have aboveboard judicial systems capable of carrying out their own investigations.

The Israeli security forces did not even allow Abu Akleh, a Melkite Catholic, to be buried in peace, disrupting the funeral procession and limiting access to her church.

On Friday, the Israeli government announced that no investigation would be launched into the deliberate desecration of Abu Akleh’s funeral.

Al Jazeera has sent the Abu Akleh killing to the International Criminal Court, which has jurisdiction over the Palestinian Territories because of the accession to the Rome Statute by the Palestine Authority, a non-state observer at the United Nations.

Blinken opposes any investigation of Israel actions in the Occupied territories by the ICC.