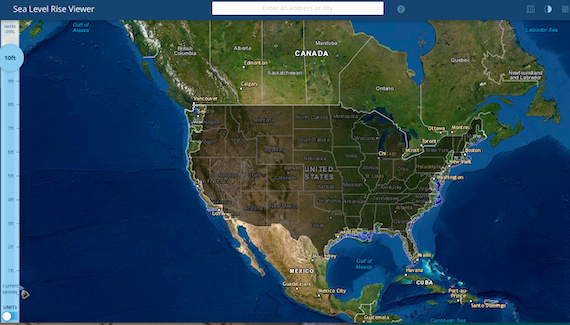 Ann Arbor (Informed Comment) – The National Oceanic and Atmospheric Administration (NOAA) announced on Friday that in May, carbon dioxide peaked at 421 parts per million, a level not seen since the Pliocene Climatic Optimum between 4.1 and 4.5 million years ago.

Human civilization developed during a long period when carbon dioxide was between 270 and 280 parts per million and the world was relatively cool, with substantial glaciation at the poles and in high mountains. Technically, given that glaciation, you could say we all along lived in an ice age, though the term is usually applied only to those eras where the ice sheets extended down to the middle of Europe and of North America. Since about 1750 with the widespread adoption of the steam engine commercially, we humans have managed to vortex 1.5 trillion tons of heat-trapping carbon dioxide into the atmosphere. We still do it today, every time we burn gasoline in our cars or heat our homes with coal and methane gas.

In that regard, 2021 was a banner year, with CO2 emissions up 6% to an unprecedented 36.3 billion tons, more than has ever been emitted in a single year in history, and 2 billion tons more than the preceding year. I don’t think that the 2015 Paris Accord is working very well. This is like a person trying to take off 36 pounds over a year, but ending up putting on that much instead. We are obese in our heat-trapping gases.

During the Pliocene Climatic Optimum, there does not appear to have been much surface ice in the northern hemisphere, and the North Pole was heavily forested. Only Antarctica had ice sheets. Because most of the ice had melted, sea levels were between 15 and 75 feet higher than today, depending on which part of the 400,000-year period you look at. It was so warm that giant camels and rhinoceri roamed Indiana, as proved by the remains in a sinkhole that escaped being scoured away by later glaciers.

NOAA’s sea rise calculator tool only let me raise the oceans ten feet, but you can see that even at that level, less than what 421 ppm of atmospheric CO2 will produce in the coming centuries, the southern half of Florida and most of its coastal regions are just gone. Miami is gone. Savannah and New Orleans are also gone. This sort of sea level rise, and indeed much more, is already baked into our future. It will happen if we don’t abruptly stop flooding the atmosphere with CO2. If we do stop, the seas will absorb a lot, but their capacity is not infinite.

During Climate Optimums of eras such as the Miocene and Pliocene, Albert C. Hine et al. write,

“During the Eocene Climatic Optimum, the Florida Platform was mostly covered by warm tropical/subtropical seas during an extended sea level highstand (Fig 15.7B). Carbonate sedimentation dominated in these shallow seas. The accumulating fossiliferous sediments formed the upper limestone portion of Florida’s carbonate platform and generated the rocks seen today in mines, pits, sinkholes, and sometimes at the land surface. These sediments and rocks formed the Ocala Limestone (Fig. 15.7A). The Miocene Climatic Optimum was also a period of relatively high sea level, during which Florida’s abundant phosphate deposits accumulated.”

During the warm eras of the Pliocene there was much less desert in, e.g., Africa. The Sahel region stretching from Senegal to Sudan, which is today arid and threatened with desertification, was lush tropical forest, possibly all the way across.

Here is what the North American Southeast looks like at 70 feet sea level rise, which is where we are likely going over time:

All the Republican climate deniers in Congress will have to find somewhere else to meet in a few centuries, since the Capitol will be under water.

Sea level rise and tropical weather everywhere, however, are not the only dangers humanity now faces. Extreme weather, frequent and large hurricanes, sudden floods and wildfires, will be signs that the climate system has become increasingly chaotic. Civilization depends on planning, on a knowledge of what the future will bring. As we make our climate chaotic, we will lose that assurance, and the uncertainty will be among our greatest challenges.