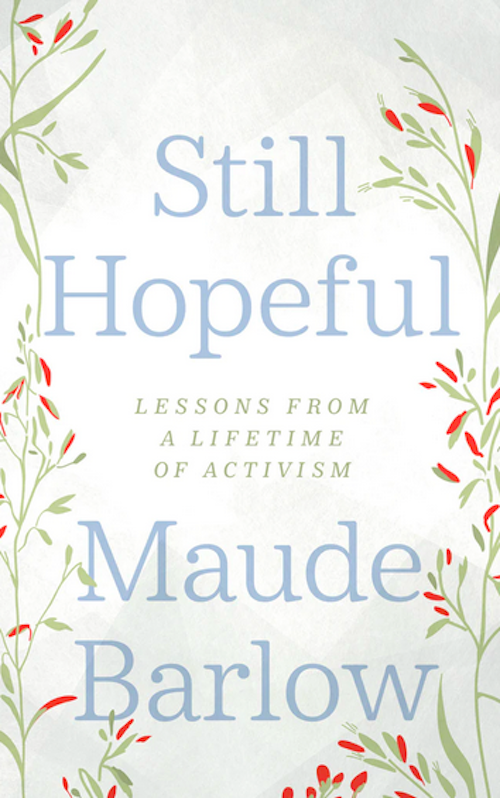 When I was teaching Political Science, some of the most memorable events were the teleconferences that Noam Chomsky did with my students.

During a discussion of international trade treaties, Noam singled out the work of Maude Barlow, then Chairperson of the Council of Canadians, as being instrumental in defeating the proposed international “corporate bill of rights” known as the Multilateral Agreement on Investment (MAI).

That victory was just one of a lifetime of Barlow’s achievements, starting with her work for women’s rights in the early 1980s, including as advisor on women’s issues to Canadian Prime Minister Pierre Trudeau (father of the current Prime Minister, Justin).

In 1985, Barlow, along with progressive thinkers such as Margaret Atwood, founded the Council of Canadians. The CoC focuses on issues such as promoting democracy and equality within Canada, as well as Canada’s role in international affairs.

After more than two decades of tireless work, Barlow was awarded the Right Livelihood Award (the “Alternative Nobel”) in 2005 – but she was just getting started.

From 2008–2009, Barlow served as the United Nations Senior Advisor on Water to Miguel D’Escoto Brockman, President of the U.N. General Assembly. (Note: D’Escoto first came to the world’s attention as Foreign Minister in the Sandinista government in Nicaragua when the U.S. was conducting its terrorist “contra” war. When I interviewed him later, I asked what was the biggest mistake that the Sandinistas made. D’Escoto replied: “We underestimated the aggression of the United States”).

Barlow led the campaign to have water recognized as a human right by the U.N. She has also fought the corporate takeover of freshwater supplies in order to guarantee that people will never lack access to this vital resource.

It will not come as a surprise that the U.N. campaign was resisted by both private water utilities and bottled water companies like Nestlé. Nevertheless, in 2010, the United Nations formally voted to enshrine access to clean water as a human right.

She also was instrumental in the formation of the Blue Communities Project, which calls on cities to adopt a water commons framework by:

· Banning or phasing out the sale of bottled water in municipal facilities and at municipal events.

Blue Communities have been declared around the world, in Spain, Greece, Brazil, Germany, Chile and so on – as well as in the U.S. and Canada, of course.

In her 20th book, “Still Hopeful: Lessons From A Lifetime of Activism”, she cites the incredible ten year struggle of the people of Bolivia to reverse an agreement that was made between their government and the World Bank to privatize the water system of its third largest city, Cochabamba. The government granted a 40-year concession to run the debt-ridden system to a consortium led by Italian-owned International Water Limited and US-based Bechtel Enterprise Holdings.

Oscar Olivera, the executive secretary of the Cochabamba Federation of Factory Workers, explained that: “From that water war, we not only recovered water for all, we created new forms of social coexistence and human bonding. We recovered trust in one another, and that caused us to lose our fear.”

Despite such significant victories, however, Barlow acknowledges that despair is not unreasonable in the face of the multiple existential crises that humanity is facing regarding democracy, our environment, growing inequality and poverty, and military conflict, to name a few.

Hope, on the one hand, is a multi-faceted phenomenon. It can be vital to coping with – and improving on – an unhealthy status quo.

On the other hand, hope can lead us to be passive in times when decisive actions – individually and socially – are required.

The dilemma regarding “hope” was the key point in the Greek legend of Pandora’s jar. It contained all of the evils of the world and when she opened it, they began to escape. When she quickly closed the lid, one evil remained: (passive) hope.

Barlow definitely does not buy into mindless optimism that humanity will definitely be able to address the multiple crises that we are facing, nor does she succumb to despair that we are helpless in the face of these existential challenges.

Instead, we are treated to an eloquent and personal account of her experience of more than four decades as an organizer, activist, and writer in her fight against greed, patriarchy, pollution, and inequality, among other evils. She provides no simple answers because there aren’t any. (In the wise words of San Francisco detective Sam Spade – aka Humphrey Bogart in, “The Maltese Falcon”: “It’s not always easy to know what to do.”)

Not surprisingly, it is younger people who are the most affected by these threats to our collective well-being. It is their future especially that are in danger. Barlow asks what can be done to, “inspire young people to see that the life of an activist is a good life…find joy in the struggle to make a better world…help them not to be overwhelmed with the enormity of the task ahead?”

That was her primary motivation for writing “Still Hopeful”.

(As an aside, a high school teacher recently told me that, while her students are anxious about their future, she has noticed a sense of activism that reminds her of the youth movements of the 1960s and ‘70s).

Barlow’s writing is clear and concise, and her narrative is enhanced by personal stories that are included when describing the lessons that she has learned in her decades of fighting for social and environmental justice.

One of her critical insights is that we cannot depend on our governmental and corporate “leaders” to do the work of creating a better world. In Barlow’s view, it is consistent, grassroots organizing and public education, at both the local and national levels, that has the best chance to lead to the kinds of change that could vastly improve our ecological, political, social, and economic realities.

And here’s one intriguing reason why hopelessness and inaction are not justified:

Research by Harvard professor Erica Chenoweth has shown that it takes only around 3.5% of the population actively participating in organizing and non-violent protests to ensure that significant political change will take place. Of course, a democratic movement must have fairly widespread support and work as much as possible within the limits of the electoral system too; but if they do so, people have a surprisingly good chance of success. The U.S. civil rights movement and anti-Vietnam war movements are two of the more significant examples. (And never forget that it was the power of the global peace movement that forced Nixon to abandon plans to drop nuclear bombs on the Vietnamese people).

Barlow explains that such grassroots movements need both, “a vision of what we want” as well as clear and “concrete goals and plans”, in order to have a real chance to make that vision a reality She notes that every achievement that societies have made, such as workers’ rights, medicare, steps toward Indigenous sovereignty, and so on, took years of community effort.

The problem with hope, as we have seen, is remaining passive in the “hope” that our political and corporate leaders will suddenly, somehow, see the light and change their ways. In fact, it is more likely that benevolent aliens from the planet Tralfalmadore will arrive to bring peace and love than the 1% will suddenly change their selfish ways…

For Barlow, active, compassionate, and inclusive hope is our best path out of our collective crisis.

Summing up, in the aftermath of the pandemic, Barlow notes that:

We now truly understand the need to ensure public health at a global level and that means it cannot be profit driven. The fight for human rights and racial, religious and gender equality has entered a new stage and is widely supported. Public appreciation for working people and their unions has never been higher as we commit to class justice as well…Never has there been a greater need for principled and informed activism – and hope.

And it helps to remember that, very often, nothing changes until a tipping point is reached – and then everything changes.

More than ever, we should remember what The Rascals sang many years ago:

“If we unite, it will all turn out right!”