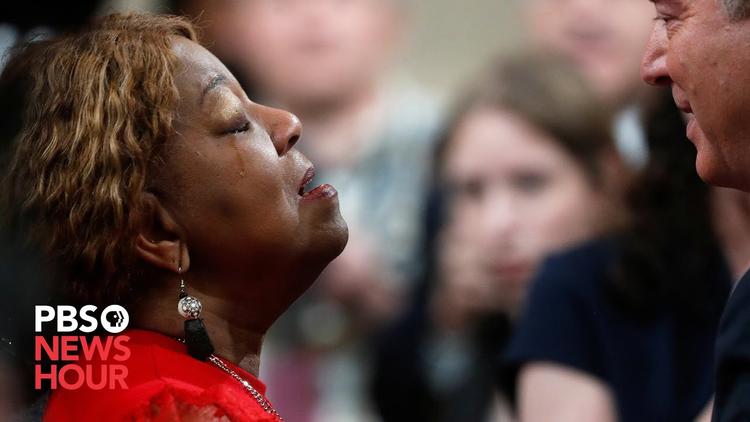 Ann Arbor (Informed Comment) – Rudy Giuliani joined in the pillorying of Georgia election worker Wandrea “Shaye” Moss, falsely accusing her of bringing a suitcase full of Biden ballots into the polling station. Ms. Moss had actually just put valid ballots in a storage container and sealed it because the election workers were led to believe the counting would stop for the evening. When that order was reversed, she had to retrieve the secured ballots from their container. There was no suitcase. The ballots were not phony or brought in from the outside. Indeed, the video of her that circulated among conspiracy theorist like Giuliani was itself doctored by a right wing nut job.

Ms. Moss’s mother, Ruby Freeman, was a temp election worker. Giuliani alleged that Moss handed her mother a “thumb drive” at one point. It was a ginger mint, Moss testified Tuesday, according to Deepa Shivaram at NPR.

Giuliani and his boss, Trump, made the lives of Ms. Moss and Ms. Freeman hell for months. Ms. Moss left her job as an election worker, moved out of her house and had to alter her appearance because Rudy Giuliani lied about her and sicced the hounds of the far right on her. “Lady Ruby” Freeman also testified to the ways her life was disrupted.

The Gofundme pages for the two women are here and here.

Giuliani was not always a sick joke. Those too young to have lived through it may have difficulty imagining the atmosphere in the United States after the 9/11 attacks. Grown men would go on late night talk shows, such as David Letterman’s (many years later succeeded now by Stephen Colbert), and break down and cry. Men weeping in public was such a taboo in American politics that it destroyed Ed Muskie’s presidential bid in 1972, but people didn’t complain about it that fall.

Letterman, who doesn’t seem to have had strong partisan politics but who mostly voted Democratic or independent, came back on air September 17, 2001,and praised Giuliani fulsomely. He said one reason he came back on air after the massive tragedy of thousands of lives lost was “Mayor Giuliani” and the firefighters and police. At some point in the aftermath, I remember him saying, “If at any point you don’t know what you need to be doing, all you have to do is look to Mayor Giuliani” or words to that effect. Letterman is a savvy man and from the beginning thought George W. Bush was a “buffoon.” But at that emotional moment, he was taken in by Giuliani and held him up as a model for the nation.

Even that fall, there were reasons to resist the beatification of the man. That fall, Saudi billionaire Alwalid bin Talal wrote a check to the Twin Towers fund for $10 million. He released a statement thereafter urging that the US reexamine its policies on Palestine. Giuliani angrily rejected the check, observing, “One of the reasons I think this happened is because people were engaged in moral equivalency in not understanding the difference between liberal democracies like the United States, like Israel, and terrorist states and those who condone terrorism. So I think not only are those statements wrong, they’re part of the problem,” But Alwalid hadn’t drawn any moral equivalency and had not condoned the attacks, contrary to what Giuliani averred. Al-Qaeda was also trying to kill Saudis like Alwalid. He simply knew that Usama Bin Laden gave as one of the reasons he planned those operations against the US the Israeli treatment of Muslim Palestinians. Nor is the Palestine Authority, which has recognized Israel and cooperates with it on security, a “terrorist state.”

That Giuliani thought Israel, where Apartheid was already well advanced, was a “liberal democracy” says it all. In slapping away Alwalid’s proffered hand, Giuliani was revealing that he was an Islamophobe, a bigot, who would later counsel Trump on how to enact a Muslim visa ban in the U.S.

Then there was Giuliani’s longstanding and creepy relationship with the People’s Jihadis (Mojahedin-e Khalq, MEK), an Iranian expatriate cult long designated a terrorist organization by the State Department (it no longer is), and which, ABC alleged, received Saudi funding. So much for moral equivalency and the difference between liberal democracy and terrorist organizations.

Then there was his creepy behavior with actress Maria Bakalova when he thought she was a young journalist in a hotel room.

Looper: That Controversial Borat 2 Scene Is Now Online For All To See

So as he went further downhill in the Trump years, throwing the rule of law to the winds, buying into ridiculous conspiracy theories, and sucking up to the monster Trump, Mr. Giuliani may have been revealing who he really was all along. The rumors of racism, even when he was mayor of New York City, and the persistent allegations of corruption, help to make sense of how he subjected Wandrea Shaye Moss and Ruby Freeman to a media lynching and ruined their lives.