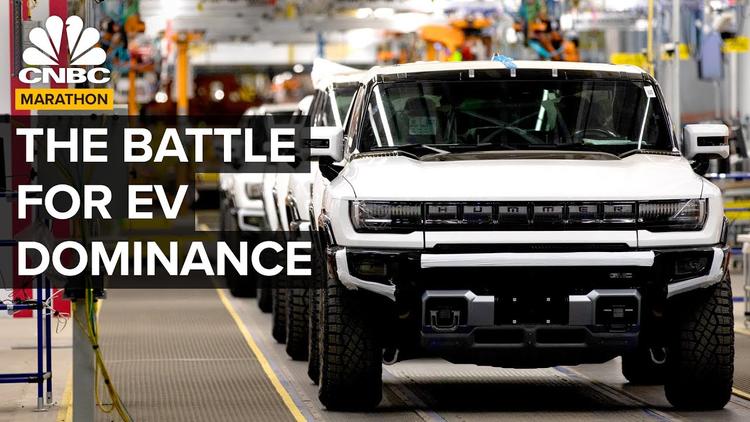 Ann Arbor (Informed Comment) – President Joe Biden called last week for a vast expansion of green energy in the United States to offset what he calls the “Putin price hike” caused by Russia’s invasion of Ukraine and the subsequent Western sanctions. He pointed out that since Russian President Vladimir Putin ordered the assault on Ukraine in February, the average price of a gallon of gasoline has gone up $2.00. His call came amid reports that new electric vehicle registrations in the US have doubled in the past year.

Speaking of the US dependence on energy imports, he said, “And if those experiences has shown us anything, it’s that we need to grow and harness more energy here at home.”

The president acknowledged that electric cars are not the only solution. He said, “And we’re investing almost $100 billion in public transit and rail, for all the studies show that it will take millions of cars off the road and significantly reduce pollution if there’s a serious transportation system available”

He called for accelerating the US production of green energy and battery storage.

Biden concluded, implicitly slamming those on the Right who have used the Ukraine crisis to plump for fossil fuels, “Folks, let’s make sure we’re never again forced to pay the price of a menacing dictator halfway around the world.We can deal with the imme- — this immediate crisis of high gas prices and still seize the clean energy future.”

Putting his money where his mouth is, Biden has allocated $2.5 billion to erecting half a million electric chargers for EVs, including in poorer communities that have been “charging deserts.”

Article continues after bonus IC video
CNBC: “How GM Is Going All In On Electrification | CNBC Marathon”

Joann Muller at Axios reports that electric vehicle sales have doubled in the past year, to 5.1% of new vehicle registrations nation-wide. Not long ago, that was a percentage you only saw in California, but now it is a national rate. This doubling has taken place despite this spring’s supply chain disruptions and despite a rise in the cast of cars across the board, including EVs.

Muller says that in April, 61% of EVs purchased were Teslas. Some other electric vehicles have had difficulty taking market share because they just aren’t available, what with supply shortages. My guess is that Tesla benefited from just having already produced a lot of cars and so could provide them to consumers without long delays.

Still, 8% of new EVs sold were Fords, and 6% were Hyundais, with another 6% being Kias.

The era of the electric car is upon us, and it will be one of the truly huge stories of the 2020s. Still, the transition may not be smooth. EV makers are urging the Democrats in Congress to extend the EV tax credit of $7500, without which they fear the market could falter. Given Biden’s remarks on the 22nd, you’d think he would pull out all the stops on this measure. But any hiccup will be temporary. The price of electric cars is expect to fall rapidly as batteries become cheaper and more efficient. That expectation is not one we can have of dirty old gasoline cars.