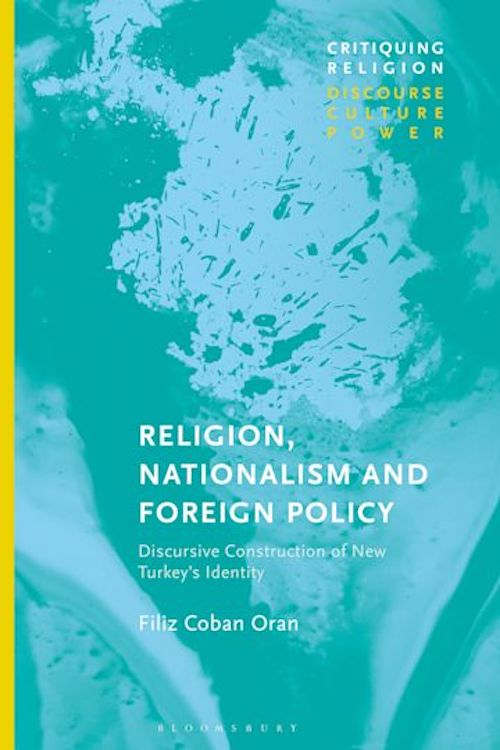 Tuebingen (Special to Informed Comment) – In 2009, US President Barack Obama advised Europe to welcome what was then called Turkey into its fold and benefit from the country’s “diversity of ethnicity, tradition and faith.” In the current context, marked by the growing mutual disenchantment between the European Union and Türkiye (the country’s new name), and President Erdogan’s increasingly authoritarian practices, political analysts would be surprised to see a Western leader make a similar statement. But the late 2000s and early 2010s were a very different period for Türkiye. That was a time when “revolutions in the Middle East prompted many commentators to point to Turkey as a model for democracy in the region.”

In her book “Religion, Nationalism and Foreign Policy,” Filiz Çoban Oran, an Associate Professor of International Relations at Türkiye’s Canakkale Onsekiz Mart University, sheds light on this specific period. Resorting to discourse analysis, she studies the (re-)conceptualizations of Turkish state-identity during the second term in power (2007-2011) of the Islamist Justice and Development Party (AKP) with Recep Tayyip Erdogan as prime minister. On the one hand, Islamist nationalism – mainly represented by the AKP – constructed its discourse “on Ottoman history and Islamic heritage.” On the other hand, the secular Kemalists – mainly represented by the Republican People’s Party (CHP) – resorted to their decades-old nationalist discourse, based on “the Republican times, M. Kemal Ataturk’s principles and heritage.”[1]

The author deploys a smart discourse analytic strategy. She studies four Turkish newspapers of different ideological currents (from the Muslim conservative Zaman to the Kemalist Cumhuriyet) regarding three key moments within the AKP’s second term: Türkiye’s presidential election in 2007, the ‘Kurdish Initiative’ in 2009, and the changes in Türkiye’s foreign policy in 2010. At that time, the country was immersed in what Professor Joshua D. Hendrick called a “media war” between Islamist and secular elites.[2] By now, one can confidently say that the AKP emerged victorious from this war. In fact, it is a testament to Erdogan’s repression of press freedom during the last decade that a study like Çoban Oran’s, which traces the diverse voices of different Turkish daily newspapers, would be almost undoable nowadays. As Professor Jenny White has remarked, the AKP now “uses the largely cowed and co-opted media to target new enemies and scapegoats for its failures.”

“Religion, Nationalism and Foreign Policy” is based on the author’s doctoral research at the University of East Anglia, United Kingdom. The very academic context in which the research project was born is probably a bit too present in the final text of the book. The introduction to Türkiye’s modern history and the ensuing discussion of the discourse analytical approach of the researcher are certainly welcome, yet both parts could have been presented in a less extensive way. In addition, a more prominent role for the actual discourse analysis and its results would probably have resulted in making the book more appealing for readers beyond the academic community.

This being said, Çoban Oran presents key findings to understand the political struggle over the definition and future of Turkishness. As Professor Neophytos Loizides has remarked, “unlike its Ottoman predecessor, modern Turkey was apprehensive of expressions of ethnic particularism, and it aspired to full homogenization (Turkification) of its citizens.”[3] After Mustafa Kemal Atatürk established the Turkish republic in 1923, the official Kemalist discourse revolved around the idea of a nation that is “culturally and ethnically homogenous.”[4] Çoban Oran notes that Islam and the Kurds were seen as the “traditional others of Kemalist nation-state identity.”[5] This is why profound changes in the way the state – which after 2003 was in the hands of the Islamist AKP – related to religion and the Kurds produced a massive backlash from the Kemalist opposition. In 2007, Abdullah Gül was elected president of Türkiye by the country’s parliament, where the AKP held a majority. The fact that Gül’s wife wore a headscarf was seen as proof of the ‘Islamist danger’ looming over the Republic of Türkiye. A columnist for the Cumhuriyet newspaper stressed the need to “protect the modernity of the country, secular regime of the state and the unity of the nation.”[6] When interviewed, one of the organizers of demonstrations against Gül remarked: “We are the enlightened future of Turkey, the real children of the country.”[7] The Kemalist opposition was not only displaying a very obvious ‘we versus them’ mentality, but also a certain disregard to democracy. After all, it was the AKP’s landslide victory in the 2007 parliamentary elections – where they gained a majority of seats and 47% of the vote – that allowed the party to appoint Gül as president in Türkiye’s National Assembly. At the same time, it is important to note that the AKP’s rhetoric did little to ease tensions. As Çoban Oran explains, the AKP claimed that before they came to government “Turkey was governed by a Kemalist elitist minority who were not aware of the Turkish people’s demands and sentiments.”[8]

AKP’s outreach to Kurdish nationalists in the so-called ‘Kurdish Initiative’, launched in 2009, was another major cause of concern for the Kemalists. The ‘Kurdish Initiative’ revolved around the granting of cultural rights and some devolution of power to Türkiye’s Kurds, while aiming to reach an agreement with the Kurdish militant group Kurdistan Workers’ Party (PKK), which has been battling the central state since the 1980s. A columnist for the newspaper Sabah defended that the AKP was the only party “both for Turks and Kurds.”[9] Although the ‘Kurdish Initiative’ soon collapsed under the weight of renewed conflict in South-eastern Türkiye, the Kemalists saw this limited opening as the prelude to the country’s fragmentation.

After exploring the 2007 presidential election and the 2009 ‘Kurdish Initiative’, Çoban Oran delves into what she calls the “axis shift in Turkish foreign policy,” that is, the AKP’s increasing engagement with the Middle East in its foreign policy. Even though it is obvious that Türkiye’s foreign policy underwent a significant change around 2010, it is not clear why the author chooses this particular year as a reference point. It might be related to the May 2010 breakoff in Turkish-Israeli diplomatic ties after the Mavi Marmara incident, in which Israeli commandos killed Turkish nationals attempting to deliver aid to Gaza. The confrontation followed the verbal clash between Erdogan and Israeli President Shimon Peres at the Davos World Economic Forum the previous year. The changes in Türkiye’s foreign policy implied a closer interaction with the Arab world, something that drew the ire of the Kemalists. Whereas then foreign minister Ahmet Davutoglu presented his ‘Strategic Depth’ doctrine as an embrace of Türkiye’s key position at the crossroads of civilizations and inheritor of the Ottoman Empire’s legacy, a columnist for Cumhurriyet interpreted the changes as “leaving Ataturk’s honourable foreign policy.”[10] The opposition to the AKP government’s foreign policy often manifested itself in anti-Arab feelings. Thus, another columnist for the same newspaper expressed his resistance to the AKP’s intention “to transform ‘beautiful Istanbul into Arabia.’”[11]

Çoban Oran’s analysis finds its chronological end in the early 2010s. And Türkiye has changed in many aspects since then. The Turkish economy, which was growing at an annual rate of 11% in 2011, is now in

Marc Martorell Junyent graduated in International Relations at Ramon Lull University (Barcelona) and is currently finishing a joint Master in Comparative and Middle East Politics and Society at the Eberhard Karls University of Tübingen and the American University in Cairo. His research interests are the politics and history of the Middle East (particularly Iran, Turkey, and Yemen), and rebel governance. He has studied and worked in Ankara, Istanbul, and Tunis. Twitter: @MarcMartorell3