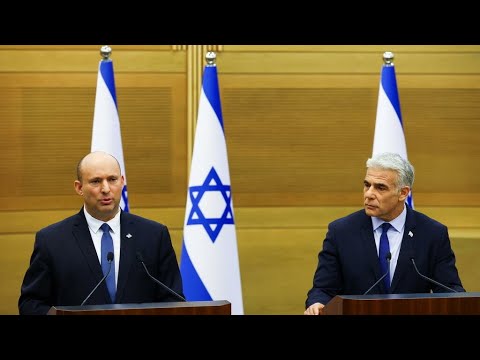 Ann Arbor (Informed Comment) – The Israeli newspaper Arab 48 reports that Prime Minister Naftali Bennett will dissolve parliament and go to new elections. His government has lacked a majority in parliament for some time and recently lost an embarrassing vote on applying Israeli law to squatter-settlers in the Palestinian West Bank. Theirs will be the shortest-lived government in Israel’s history.

The fall of the government will not impede the planned visit of President Joe Biden to Israel in July.

Arab 48 says that Bennett and his co-prime minister, Yair Lapid, have decided to go to early elections in view of the continuing crises that have paralyzed their unwieldy, eight-party odd-bedfellows coalition and the defection of ministers from Bennett’s own small, far right wing Yamina Party. A Palestinian-Israeli member of the Knesset or Israeli parliament from the center-left Meretz Party has also wavered about belonging to the government.

Lapid will become the interim prime minister and remain foreign minister during the tenure of the caretaker government, while Bennett is stepping down as prime minister but will remain alternate PM and retain control of the Iran portfolio until elections, likely to be held in October.

This will be the fifth election in 3.5 years, as the Israeli government continues to face instability because of the opposition of most party heads to a leadership role for Binyamin Netanyahu, a former prime minister who is being tried for corruption and because of difficulties in accepting or preserving Palestinian-Israeli MKs in a government coalition.

Arab 48 says that the failure of the government to renew the The “Judea and Samaria Emergency Regulations, Governance and Legal Aid Act,” which the newspaper called the “Apartheid law,” was a major motive for the decision.

This impasse points to the continued contradictions in Israeli policy. The political elite wanted to lock Netanyahu out of the prime ministership, but there were not enough Jewish members of parliament to accomplish this goal on their own. Bennett and Lapid therefore for the first time brought “Israeli Arab,” what I term Palestinian-Israelis on the model of “Italian-Americans,” into the Israeli government. The United Arab List, Muslim fundamentalists akin to the Muslim Brotherhood, is religiously oriented rather than Palestinian nationalists, and were willing to serve in an Israeli government if they could better the lives of their villager constituents.

Yet, when it came to the Israeli Apartheid system in the West Bank, where Israeli squatters are under Israeli law and Palestinian natives are under military rule, one member of the United Arab List just couldn’t hold his nose and vote for Apartheid for his fellow Muslims.

So you can have an anti-Netanyahu coalition or you can have a pro-colonization coalition, but you can’t have both at the same time. The marvel of the Bennett government was that it lasted so long.

I explained in early June that the law had been “passed soon after the Israeli military occupation of the Palestinian Territories in 1967, which put Israelis who squatted on Palestinian land under Israeli law but put the Palestinians under military rule,” and the circumstances of the failure to pass the bill:

“The Bennett government includes six members of parliament from the Palestinian fundamentalist religious party, the United Arab List, known in Hebrew as Ra’am. One of them voted against the bill, which Palestinians see as foundational to the continual mistreatment of the indigenous Palestinians. The other Ra’am members simply absented themselves from the vote. Another “no” came from Rinawie Zoabi, a Palestinian-Israeli from the center-left Meretz Party. She had briefly resigned from the government but rejoined three days later. She said her vote on the Judea and Samaria Emergency Regulations Act was a matter of conscience and not intended to bring the government down. Another far-right israeli MK resigned from the government two months ago, leaving Bennett with only 60 votes in the 120-member Knesset. So far he has muddled through with the help of Ra’am.”

Ordinarily the bill would have passed easily with votes from the fundamentalist right wing religious parties and the secular far right party, Likud, led by Netanyahu. But the latter convinced his party and its allies to boycott the vote, knowing that it would cause the Bennett government to fall and present Netanyahu with the opportunity possibly to come back to power and find a way to use the prerogatives of office to get the corruption charges against him dismissed.

Bennett said he had consulted with Attorney General Gali Baharav-Miara last Friday and came to see the “extent of the chaos that a failure to extend the Emergency Regulations Act would produce in the West Bank.” The law needs to be renewed before the end of June.

If the parliament is dissolved when the Emergency regulations come up for renewal at the end of the month, they will be extended automatically, according to Israel’s attorney general.

Bennet and Lapid announced that they would introduce the measure for the dissolution of parliament next week. Bennett said, “I became convinced that Israel would enter severe legal chaos, and I decided not to permit it, so I took this decision. This isn’t an easy moment, but we made the right call.”

Lapid said that Israel needed to recover its unity and that even if the country went to new elections, some ongoing challenges needed to be met, including inflation and the prosecution of the struggle with Iran, Hamas and Hezbollah.”

Those close to Bennett said that he was weighing his options and could withdraw from politics for some time. He may on the other hand run again, on the Yamina ticket.

The second course of action could be awkward, since Yamina MK Nir Orbach withdrew his support from Bennett’s government, helping provoke its fall. Orbach complained about the refusal of some Palestinian-Israeli MKs to vote for the extension of the Judea and Samaria Emergency Regulations, Governance and Legal Aid Act as “extremist anti-Zionist elements.” The Times of Israel reported at the time that “Orbach almost got into a physical altercation with [Mk Mazen] Ghanaim after the bill was felled and shouted, “The experiment with you guys has failed,” in reference to the coalition’s unprecedented inclusion of an Arab party — Ra’am.” Although most members of the United Arab List or Ra’am did not vote against the extension of the law, Ghanaim did. It was, ironically, Bennett’s inability to maintain discipline in the ranks of his own party that caused his fall. Another Yamina MK, Idit Silman, left the floor during the vote.

Note that Orbach has reinterpreted Zionism from being Jewish nationalism or pride in Israel to involving the assiduous settling of Israeli squatters in the Palestinian West Bank. And if that is Zionism, then any moral person has to be anti-Zionist.