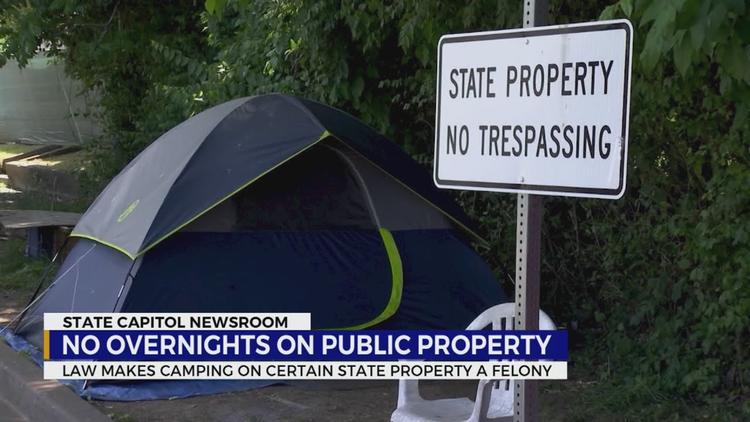 In today’s America, it is increasingly difficult to tell government officials from criminals. A case in point is the Tennessee legislature, which just criminalized homelessness as a felony , which is surely is a crime against man, nature, humanity and natural law. As of July 1, it will be a felony in Tennessee to camp on public property punishable by up to six years in prison, according to the Equal Access to Public Property Act of 2012. This includes public parks, bridge shade, viaducts and overpasses and any public property that might offer shelter from heat, rain and other elements.

The Tennessee house and congress have now stooped to willfully killing his own citizens to curry favor with the far-far right-wing electorate whipped up by Donald Trump. The original law applied to state parks. Now any poor soul in Tennessee needing to camp out for the night out of hardship or necessity can land in state prison for up to six years. How cruel. As a subject in the article notes, “ “I’m having a tough time trying to find housing. Now you’ve got to have all these forms of ID or paperwork to get housing. Then you got to be able to afford the rent too.” Debtors prisons were struck down by the Supreme Court in 1933. Now it is again a crime to be poor. Remember, you cannot find safe, quality housing in America without credentials.

I live in the Berkeley-Oakland area of the SF Bay Area, where homelessness has been an epidemic for at least the past 40 years. On recent visits to Memphis, my hometown, I was heartbroken to see war veterans sitting in wheelchairs asking for aid at major intersections throughout town. I had thought that only happened in the Bay Area, LA, NYC and other so-called “world-class cities.” I first saw such destitution visiting Cairo in 1980 when I was a grad student at the University of Michigan. It’s common to see the worst forms of impoverished human existence juxtaposed to great wealth and opulence in Cairo, Mexico City, Delhi and other mega-metropolises. Now we have it filtering down to our mid-sized cities.

Call me old fashioned, but I still blame Ronald Reagan. Let’s remember that his presidency set the model and template for much of the draconian cruelty prosecuted by the Trump presidency, and now claimed as a model by Greg Abbott of Texas, Ron DeSantis of Florida and other ambitious Republican governors. They want to inherit the “base,” and will engage in whatever meanness is necessary to accomplish that.

I vividly remember the day in February 1981, when I walked to the Peoples’ Food Coop on Fourth Ave., and saw a line of dozens of dirty, broken and (OK . . . nasty) men lined up to get into a SRO housing project. That was the day Reagan had chosen to “deinstitutionalize” hundreds of thousands of mentally ill patients all over America and throw them out into the streets. That was the day of the first massive line up for a bed in Ann Arbor, and I’m told also Berkeley and Portland too. At one point Reagan argued that if every church and synagogue took in 10 welfare recipients, we wouldn’t have homelessness and poverty. Spiritual leaders argued that is not the churches’ job.

Reagan’s campaign to marginalize the poor and homeless continued under Bush Sr. and Jr., with an ever shrinking budget for public services, and ever shrinking regulation, which led to more internal corruption in their governments.

Then there was my brief experience. While waiting for a new home to be made ready in Berkeley where I’d placed a deposit, I stayed in a downtown hotel for a few days. I was chased out of there by an early morning fire, placed in a hotel by the Red Cross in Oakland, where I stayed for a few weeks because the place where I placed a deposit in Berkeley had fallen through. Adding pain and embarrassment to the situation was to see a picture of myself on the SF Chronicle website, with my head in my hands on the median of University Avenue, which a Chronicle photographer had taken. I went to a popular pub/restaurant that night where the owner pointed it out to me, and everybody asked me about it. I’ve known a few people socially who have homeless experiences, some habitual. A common cause for all is storage and safely storing valuable property. Just because people become fall on hard times, doesn’t mean they never had valuable books, arts, music furniture, photos, family history records and other precious property. I got real insulted when a wealthier relative suggested I sell my books, art, furniture and collectables, as if I would have reaped full retail value, which NEVER happens. Seeing a yard sale can be heartbreaking if you’ve ever HAD to do it, and sell property you really want to keep.

Sponsors of the Tennessee bill cite “health and safety concerns,” which are the same brand of bullshit as the “stolen election.” Don’t blame me for foul language being common in journalism now. You can thank Trump and Bill “Low” Barr. They erect a phony façade of compassion to mask great cruelty.

I respect the motivation, for wanting to avoid scenes so common in SF, Oakland and Berkeley of sprawling homeless encampments at hundreds of underpasses, viaducts and park areas. They have become imposing public health threats, especially during the pandemic. But taking people off the streets and placing them in state prisons is not the answer. Then consider the motivation to fill all the private prisons also erected under the Reagan model. They couldn’t fill them up with enough black and brown reefer smokers, so they’ve found a new target market.