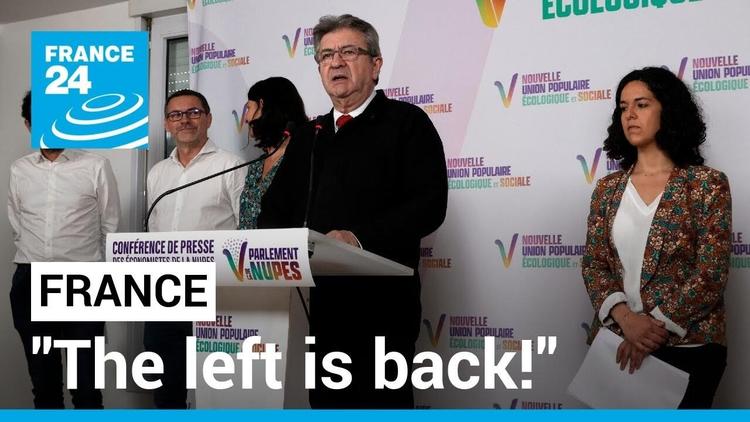 Macron campaigned on raising retirement age to 65 and reforming pensions, which no one in France but a few corporate CEOs wanted.

NUPES garnered 131 seats, an incredible and unexpected performance. The old centrist left of the Socialist Party had fallen on hard times, but Mélenchon’s more uncompromising leftist approach appears to have hit a nerve.

Dalal Mawad at CNN quoted Mélenchon as saying, “The collapse of the presidential party is total, and no majority is presented. We have achieved the political objective that we had set ourselves, in less than a month, to bring down the one who, with such arrogance, had twisted the arm of the whole country, who had been elected without knowing what for.”

One of the members of NUPES was the Greens, whose leader, Julien Bayou, easily won his seat. Unlike in Germany, France’s Green Party had faltered in the teens of this century and lost representation in parliament. Now, as part of the alliance of Left parties, the Greens had been projected to make an even better showing than in 2012, when they gained 17 seats, according to Anne-Charlotte Dusseaulx and Arthur Nazaret at Le Journal du Dimanche. As of this writing, the Interior Ministry had not broken out NUPES wins by party.

Europe’s parliamentary systems are typically multi-party affairs and they offer more scope for diversity than the US de facto two-party system. The most Greens can practically do in the US is to establish caucuses inside the two major parties.

Not only will the Greens likely have a substantial presence in parliament, where they can work on climate and environmental issues, but Borne may be forced to turn to them on some climate legislation. If so, the Greens will be in a position to help shape national policy, Dusseaulx and Nazaret write.

Deliciously, Environment Minister Amelie de Montchalin was unseated by NUPES, along with two other cabinet members, who will have to depart government.

The fascist National Rally (Rassemblement national) of Marine Le Pen got 89 seats, a historic gain for Le Pen, who ran credibly for president (or perhaps Führer) against Macron but lost.

The old Gauillist center right, the Republican Party (and its coalition partner, the Union of Democrats and Independents), did even worse than the fascists, coming in fourth with 61 seats.

The French electorate is clearly dissatisfied, with inflation and energy prices hitting them hard just as in the rest of the world. Both the Left and the fascist right saw a big increase in support, though it is a relief that the Green-Red coalition of leftists and environmentalists did twice as well as the fascists. This round of parliamentary elections saw a relatively poor turnout, suggesting that many voters feel alienated from the political process.

It remains to be seen if Macron’s Prime Minister, Elisabeth Borne, will seek support from the Republican Party Gaullists to make up her majority, or from members of the Greens or the Socialist party. Although Macron is considered a centrist and served in a Socialist government, he is a Neoliberal close to France’s finance industry, and leans center-right, often attacking leftists and immigrants (i.e. Muslims, who make up nearly 10% of the population).

AP points out that Macron and Borne could negotiate support for legislation and policy on a case by case basis, bringing the Republican Party on board for some legislation but working with the left or greens on others.