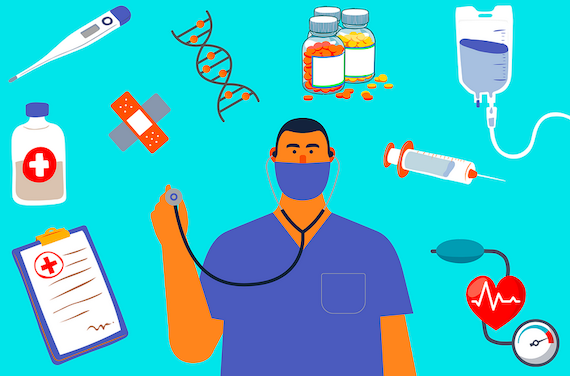 You may wonder why former President Harry Truman is sitting close by while President Lyndon B. Johnson signs Medicare and Medicaid into law in the iconic 1965 photograph. Or why Harry Truman received the first-ever Medicare card. The reason is that Truman first proposed a Medicare-like system in 1945—but it took two decades, another Democratic president, and a Democratic supermajority in Congress to overcome opposition from political conservatives and the health industry. As we celebrate 57 years of Medicare and Medicaid successes on July 30th, it is vexing that these two vital programs continue to be in the cross-hairs of GOP opponents.

Democratic proposals to protect and expand Medicare and Medicaid have received almost ZERO support from the GOP, while proposals to privatize and cut benefits have originated with Republicans.

Today, elderly and low-income persons can truly say that—thanks to these two landmark programs—they are free from fear of not having health insurance.

Before Medicare was enacted, 56% of American seniors had no health insurance. Retirees were no longer covered by their employers. Private insurers considered them a “particularly bad risk” and rejected them as customers or charged premiums almost no one could afford. The uninsured elderly had to rely on family, friends, or charity to cover medical bills. More than one in four seniors went without medical care altogether.

Low-income Americans suffered a similar plight prior to the enactment of Medicaid. The poor had “limited access to healthcare, relying heavily on charity care and public hospitals,” according to Modern Healthcare. While those deemed the “deserving poor” might receive care through community and religious organizations, “able-bodied (low income) people needing healthcare were generally out of luck.”

A crowning achievement of LBJ’s Great Society, the enactment of Medicare and Medicaid affirmed that the federal government had a legitimate—and moral—obligation to ensure that the most vulnerable among us could obtain health coverage like everyone else. A truly Great Society would refuse to leave the poor and the old out in the cold when they needed care.

“No longer will older Americans be denied the healing miracle of modern medicine,” said President Johnson upon signing Medicare and Medicaid into law. “No longer will illness crush and destroy the savings that they have so carefully put away over a lifetime so that they might enjoy dignity in their later years.”

Unfortunately, Medicare and Medicaid faced opposition from a vast majority of Republican members of Congress from the beginning. None other than Ronald Reagan warned in a 1965 radio address that “one of the traditional methods of imposing… socialism on a people has been by way of medicine.” Reagan promised that if Medicare and Medicaid were enacted, “One of these days you and I are going to spend our sunset years telling our children… what it once was like in America when men were free.”

In fact, the opposite occurred. Today, elderly and low-income persons can truly say that—thanks to these two landmark programs—they are free from fear of not having health insurance. Neither program is perfect. Federal programs of this scope must continually be updated to reflect present realities. However, public support for Medicare and Medicaid is unequivocal. Here are some of the things that our volunteers and supporters have told us over the past few years:

“I had cancer. Without Medicare, I would have been dead.”

“As someone with several chronic conditions, I have a great peace of mind because Medicare and Medicare supplemental insurance pay my health care bills.”

“My son is a special-needs child. Medicaid was our saving grace in terms of having medical insurance.”

“My mother had an aneurysm. If she didn’t have Medicaid, she would not have been able to recover at home quickly and comfortably.”

Some 76 million Americans are covered by Medicaid, which not only provides health insurance for low-income people, but pays more than 60% of the cost of long-term care services and supports for seniors. Roughly 64 million Americans—most of them over 65 years of age—are enrolled in Medicare. That’s about 140 million examples of how Americans with chronic and acute health conditions—who otherwise might not be able to obtain private insurance—can get the health care they need thanks to the vision of President Lyndon Johnson and the U.S. Congress in 1965.

We all should applaud these achievements and the resulting health improvements and increased longevity of our oldest citizens—right? Instead of simply being able to celebrate this 57th anniversary, though, seniors’ advocates are having to fight to preserve these life-saving, poverty prevention programs. That’s because elite, well-funded, and powerful conservative interests who oppose Medicare and Medicaid continue their efforts to undermine both. During the Trump administration, Republicans renewed their calls to “block grant” Medicaid, which would have forced the states to slash benefits and trim their rolls of insured citizens. Democrats have been able to stop those efforts for now.

As for Medicare, instead of voicing outright opposition, adversaries now pay lip service to preserving Medicare. (President Trump famously promised “not to touch” Medicare but proposed to cut the program by billions of dollars in successive White House budgets.) Today, many conservatives focus on privatizing Medicare. The privatization effort got a running start through the Medicare Advantage (MA) program, which was created by the Medicare Modernization Act of 2003. (It’s the same law that forbade Medicare from negotiating prescription drug prices with Big Pharma.)

Medicare Advantage was supposed to save taxpayers money by providing more cost-effective care than the traditional Medicare program. Instead, MA insurers have benefitted handsomely from federal overpayments and fraudulent diagnostic “upcoding.” As multiple news reports and investigations have confirmed, Medicare Advantage insurers overbilled the government to the tune of $34 billion dollars in 2018-2019 alone. They’ve also increased profits by denying medically warranted pre-authorization requests and refusing to reimburse providers for valid claims.

Likewise, Part D prescription drug prices have continued to rise dramatically, hurting seniors on fixed incomes while Big Pharma profits climb ever higher. In 2021, major pharmaceutical CEOs raked in over $292.6 million while 2.3 million seniors were unable to afford at least one doctor-prescribed medication. How ironic that the fiscal conservatives who blast Medicare spending on seniors are at the same time shamefully silent while MA insurers and drug makers reap record profits from the program.

The reason you will likely only hear Democrats marking the anniversary of Medicare and Medicaid is that these programs began with them; they have endured because of them; and the future of both programs depends on electing members of Congress who will strive to continue them.

Meanwhile, private interests recently have gained a bigger foothold in the publicly-run, traditional Medicare program. When Accountable Care Organizations (ACOs) were established through the Affordable Care Act they were intended to improve coordination of care of chronic conditions by having Medicare contract directly with providers to improve quality of care. Over time, for-profit investor driven groups have insinuated themselves into the program. A new initiative begun during the Trump era (later rebranded as ACO/REACH by the Biden administration), provides substantially increased financial incentives for reducing costs. Seniors’ advocates are rightfully concerned that this will draw more private entities into traditional Medicare and could eventually lead to additional problems akin to what’s been taking place in the Medicare Advantage program.

For years, Democrats have been the only force behind expansion plans for traditional Medicare to cover basic hearing, vision, and dental care. President Biden included these in his initial Build Back Better plan, but vision and dental care were later dropped in Congressional negotiations. Hearing care coverage and expanded Medicaid home and community-based services also perished after Senator Joe Manchin withdrew his support. In an effort to salvage some of their expansion efforts, Congressional Democrats recently sent a letter to the Centers for Medicaid and Medicare Services (CMS) urging that the program broaden the rules for “medically necessary” dental care to cover seniors with various health conditions affecting their teeth.

As for Medicaid, the Biden administration continues to encourage states to expand their programs under the Affordable Care Act. About a dozen red states still refuse to expand their Medicaid programs, denying coverage to millions of uninsured, low-income residents—even though the federal government offers the states extra funding for expansion.

Let’s be very clear, Democratic proposals to protect and expand Medicare and Medicaid have received almost ZERO support from the GOP, while proposals to privatize and cut benefits have originated with Republicans. The reason you will likely only hear Democrats marking the anniversary of Medicare and Medicaid is that these programs began with them; they have endured because of them; and the future of both programs depends on electing members of Congress who will strive to continue them. Seniors who value these crucial, life-saving programs should bear this in mind when casting their votes in November. As we mark this 57th anniversary, let’s re-commit to protecting the two greatest pillars of the Great Society.

Max Richtman is president and CEO of the National Committee to Preserve Social Security and Medicare. He is former staff director at the United States Senate Special Committee on Aging.